Æthelred the Unready, King of the English: 1,000 years of bad press

He was just a boy when he became King of the English and his reign was marked by repeated attacks by the Danes. Æthelred, who died 1,000 years ago on 23 April 1016, is remembered as ‘the Unready’.  But his nickname masks a more complex picture.

Throughout history, Æthelred’s payment of Dane-geld has been used as a short hand for drastic mismanagement. But there is another, more complex, picture to be painted of Æthelred’s reign.

A silver penny struck more than ten centuries ago (on display in the Fitzwilliam Museum) shows Æthelred, King of the English. The obverse shows the king in profile and the reverse a Christian cross. Thousands of similar coins have survived. Many are in collections in Copenhagen, Oslo and Stockholm. This coinage is material evidence of ‘Dane-geld’, money paid to England’s enemies in attempts to forestall Viking invasions of England.

Inevitably remembered as ‘the Unready’, Æthelred died exactly 1,000 years ago on 23 April 1016 – 50 years before the Norman Conquest. The same date in April is recorded as the day of the death of William Shakespeare (in 1616) and also celebrated each year as St George’s Day.

Born around 968, son of King Edgar and Queen Ælfthryth, Æthelred died in London, a place that had recently been established as political and commercial centre of England. He was the first monarch to be buried in the old cathedral of St Paul which much later became one of the most notable casualties of the great fire of London.

Æthelred’s nickname is a pun that may date from as early the 11th century. Æthelred means ‘noble-counsel’ while the noun unræd means ‘an ill-considered or treacherous plan. “The nickname degenerated from ‘Æthelred unræd’ into ‘Æthelred the Unready’, and ‘Æthelred no-counsel’, giving rise to further stories about him,” says Professor Simon Keynes.

Keynes, a historian in the Department of Anglo-Saxon Norse and Celtic, has worked extensively on the Anglo-Saxon period – especially the charters and coinage that offer new windows into a time of turmoil. He was the organiser and keynote speaker at a conference last week.

Æthelred was just a boy aged around 12 years when he became King of the English, and his long rule was marred by repeated incursions from the Danes. Far from keeping English shores safe from attack, the vast amounts of money paid to the Danes (estimated at £250,000 – a huge sum at the time) simply whetted their appetite for English riches. They took the money and continued their raids. In 1016 England became, for some 50 years, part of an empire of the North Sea.

From the 6th century onwards, England had converted to Christianity while the Danes continued to worship Norse deities. Æthelred believed that this placed God on his side – but prayer proved useless. So did reprisals on Danish settlers. Fruitless attempts to bribe or defeat the Vikings sealed Æthelred’s reputation as a disastrous king who deserved to fail. Sellar and Yeatman’s 1930s classic 1066 and All That echoes this sentiment: the “Wave of Danes” who overran the country were “undoubtedly a Good Thing”.

“Throughout history, Æthelred’s payment of Dane-geld has been used as a short hand for drastic mismanagement and poor decision making,” says Keynes. “But there is another, more complex, picture to be painted of Æthelred’s reign, and the ways that he and his councillors tackled the considerable challenges that they faced as they sought to administer a kingdom and protect their respective interests.”

Much of what we know about Æthelred’s reign comes from the Anglo-Saxon Chronicle - an account by an anonymous chronicler of each year’s notable events. The Anglo-Saxon Chronicle is far from impartial: its verses were composed by court poets, or skalds, who celebrated the deeds of the leaders of the Viking armies. “The story told in the Anglo-Saxon Chronicle, and retold many times thereafter, is very superficial. But there is plenty of other evidence for the period, and the deeper one looks, the more complex and interesting it all becomes,” says Keynes.

Keynes says that no single body of evidence is richer than the 130 charters that survive Æthelred’s reign. More properly called ‘royal diplomas’, these charters are documents that record agreements made at assemblies held four or five times a year. Such meetings, which took place at major festivals, such as Easter and Pentecost, were an opportunity for both ceremony and business. The charters, written in Latin, were witnessed by prominent members of the church and key land-owners.

“In comparison to the Anglo Saxon Chronicle, which is a wonderfully vivid narrative in the vernacular, the diplomas are dry and seemingly impenetrable documents – and it’s true that individually they appear to yield little. But considered collectively, they offer an opportunity to reach below the surface of recorded events,” says Keynes.

The majority of the charters issued during Æthelred’s reign represent grants of land. Others give detailed details of the forfeiture of land into the king’s hands or confirm the entitlement of a religious house to lands and privileges which have been lost.

“Royal diplomas were highly valuable documents in their own right. It was the possession of the charter itself which gave an individual the right to the land described even if the individual in question was not named. Not surprisingly copies and forgeries were made – which, for the historian, makes puzzling them out even harder,” says Keynes.

“The diplomas also have long lists of witnesses which, when tabulated and analysed, enable one to detect interesting changes in the composition of the king’s councillors over the course of Æthelred’s long reign – suggesting perhaps who was gaining in power and who was declining.”

Exeter Cathedral holds one of the most beautiful surviving charters, written in ink on parchment. Æthelred's diploma for Bishop Ealdred of Cornwall (994) confirms Ealdred's status as bishop of Cornwall, at St Germans, and states that he is to have the same rights as the other bishops have in their own dioceses. “This charter was probably the outcome of a determination on the part of Archbishop Sigeric to set things in order,” says Keynes. 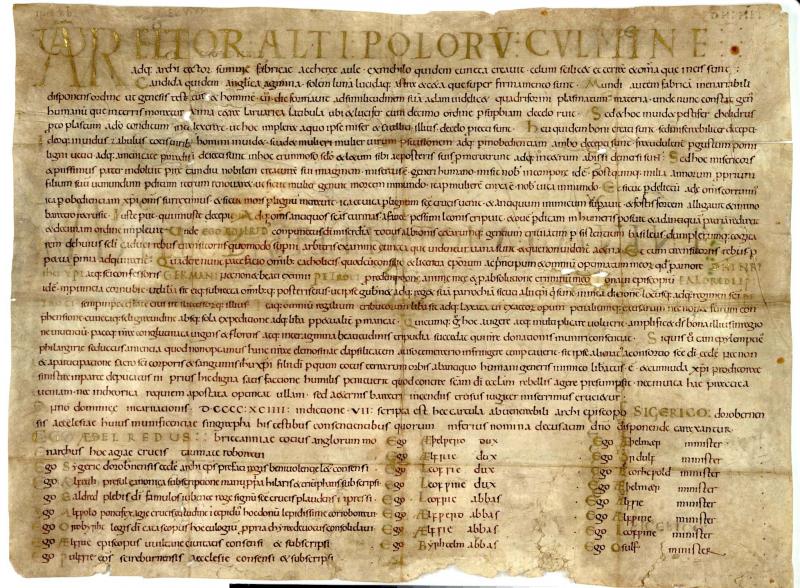 “The English were under severe Viking attack, and this was one way of making arrangements more pleasing in the sight of God. The diploma was issued at a royal assembly, and was witnessed by a number of bishops, ealdormen, abbots, and thegns - in other words by the great and good of the land.”

Coinage offers another window into Aethelred’s reign and management of money is likely to have been on the agenda at royal assemblies. In a collaboration with the late Mark Blackburn, Keeper of Coins and Medals at the Fitzwilliam Museum, Keynes took a keen interest in the coinage of Æthelred’s reign. “Coinage was struck at as many as 80 minting places across England. It was produced in huge quantities for export as part of the tribute money paid to Viking armies and the army tax paid to a standing mercenary force,” he says.

“Variations in coin designs over time suggest that Æthelred and those working with him developed and maintained a system of staggering complexity. To control the economy, the authorities recalled coins of one type from circulation and exchanged them for coins of a new type. The designs tell their own stories. The earliest types feature the hand of God issuing from a cloud, perhaps to signify divine approval. Later the emphasis shifted to the king’s portrait and he is shown initially bare-headed and later wearing a helmet.”

The rarest of the coins struck in Æthelred’s time is a short-lived Agnus Dei (Lamb of God) type. Worldwide, just 24 survive, one of which is in the collection of the Fitzwilliam Museum and displayed in the Rothschild Gallery. What makes this coin so remarkable is the absence of king’s portrait: the obverse features the Lamb of God and the reverse a dove, symbol of the Holy Spirit. “The design represents a desperate appeal for peace, in perilous times,” says Keynes.

In portraying Æthelred’s reign as a time of turmoil, historians have drawn on a sermon given by one of the king’s most powerful advisors. Archbishop Wulfstan’s message to the English people is full of gloom: “For it is clear and manifest in us all that we have previously transgressed more than we have amended, and therefore much is assailing this people. Things have not gone well now for a long time at home or abroad, but there have been devastation and famine, burning and bloodshed in every district again and again.”

The forces ranged against Æthelred were impressive and implacable. In 994 a Viking fleet of more than 90 ships came up the Thames to London. In 1009 the Vikings came again. Almost ten centuries later, in the 1920s, a group of battle axes and spearheads, dating from around 1000, was found in the river close to old London Bridge. Vivid reminders of the raiders who sailed up the estuary to strike at the heart of England, they are on display at the Museum of London.

The eight battle axes, with their fearsome curving edges, also pose a question: how could the king and his councillors overcome a threat of such a kind?

In September 1666 the great fire of London destroyed St Paul’s cathedral, taking Æthelred’s tomb with it. Today Æthelred is remembered in the cathedral coffee shop where a stone commemorates all the tombs known to be lost. “It’s quite touching to see Æthelred’s name close to the place where he was buried in 1016 and where he lay for the next 650 years,” says Keynes. “It’s highly unlikely that he will never shake off the damage done to him by his soubriquet – but it’s well worth continuing to challenge the accepted versions of the history of a fascinating period.”

Coins from Æthelred’s reign are displayed at the Fitzwilliam Museum in the Rothschild Gallery. Æthelred's charter for Bishop Ealdred of Cornwall (994) is available for consultation at Exeter Cathedral on request. 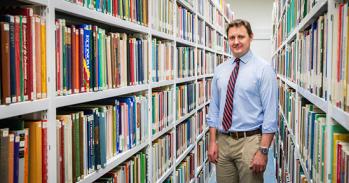 Silver penny from the reign of King Æthelred