Opinion: Can the EU keep the peace in Europe? Not a chance

Chris Bickerton (Department of Politics and International Relations) discusses the role of the European Union.

The European Union won the Nobel Peace Prize in 2012 because of its “six decade-long contribution to peace and human rights in Europe”. In 2015, as the UK gears up towards its referendum on EU membership, we hear very often that the EU played a key role in building peace after World War II. For all its faults, the argument goes, the European Union is the best peace project Europe has.

There are three reasons why this is wrong. The first is that European integration contributed very little to the building of peace in post-war Europe. The second is that the EU’s record in keeping the peace on its external borders is poor. The third is that the Euro has aggravated conflicts between the members of the Eurozone: between north and south, creditor and debtor, exporter and importer.

It may seem crazy to suggest that the EU is not a peace project. This is, after all, its founding narrative. But history suggests otherwise for two reasons.

One is that in the late 1940s and 1950s there were many more powerful forces leading to peace in Europe. The shift from warfare to welfare states, made possible by the class compromise put in place after World War II, was crucial. European cooperation was really just an extension of that deeper change in European societies. The Common Agricultural Policy (CAP) was intended to extend welfare provision to farmers.

Central to post-war peace in Europe was also the Cold War and the support given to Western Europe by the United States. Most important of all was the post-war boom. After the war, people wanted a better life and it was to their own governments that they turned.

Another reason is that the EU of today has little to do with European cooperation in the 1950s. Today’s EU has more recent roots. The Coal and Steel Community was a cartel intended to make European steel production more competitive and give the French access to West German coal. This initiative was quickly overcome by the economic success that raised demand for coal and steel. By 1957, it was quietly folded into the Treaty of Rome.

The aim of the Treaty of Rome was to soften the effects of economic success. Growing economies push up wages and prices, which makes imports cheaper and leads to repeated balance of payments problems. Look at Britain’s Stop-Go economic experience of the 1950s and 1960s. A common external tariff, which raised the prices of imports, was Western Europe’s answer to this problem.

Today’s EU has its roots in economic crisis, not in economic success. Its history takes us back to the 1970s and the end of the post-war consensus. Governments sought many ways to exit this crisis and eventually settled on European market integration (the Single European Act) plus fiscal consolidation through more robust external rules (the Maastricht Treaty). This takes us to the EU and the euro of today.

The European Union has not been very successful at promoting peace beyond its own borders. The EU does have a foreign policy but it is stuck in a time loop.

If one goes back 20 years to 1995, the kinds of questions being raised about Europe’s role in promoting peace related to whether it would speak with one voice. This was the time of the Yugoslav war when European divisions meant that the United States got heavily involved in the Balkans. People wondered if the EU would finally become not just an economic giant but a political one, too. People described 1995 as a crossroads and a watershed moment.

Fast forward to 2005 and the very same clichés are being used. Two years after the US invasion of Iraq had divided Europe, people asked when it would speak with one voice. The EU was again at a crossroads. This was two years after the EU’s first Security Strategy, intended to give Europe a sense of direction in foreign policy.

Today, we hear much the same thing and Europeans are once again drafting a new security strategy. The war in Ukraine led commentators to lament the divisions between EU member states. The rise of Islamic State in the Middle East has made people wonder if the EU will ever become a regional power or whether it will always have a “lowest common denominator” foreign policy.

As in the film Groundhog Day, where Bill Murray is stuck in a time loop, the European Union is forced to relive its foreign policy frustrations time and time again. Groundhog Day has a Hollywood-style happy ending; the EU may not be so lucky.

The euro versus democracy

The euro was meant to lead to convergence in Europe. It was expected that a single currency would lead to harmonisation of national business cycles. Instead, the buzzword amongst economists is heterogeneity. 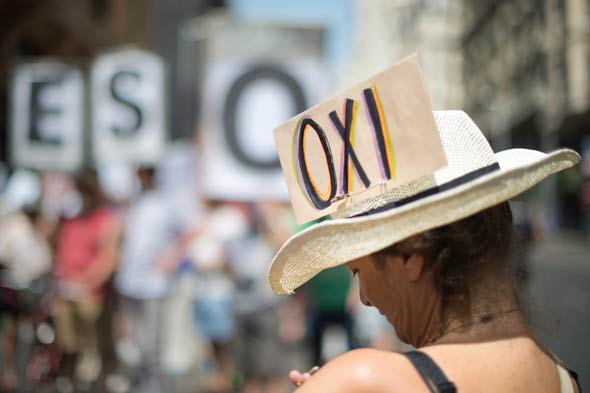 The euro has created new divisions but it has also cemented older ones. It has exaggerated the differences between productive and unproductive national economies. It has heightened intra-Eurozone competition. New divisions between debtors and creditors have broken out. There is no single European economy, just very different national economies. More than ever before, the economic map of Europe looks like it did in the 19th century when advanced northern societies complained about the “backwardness” of southern and eastern Europe.

A solution to this is to build a political union with fiscal powers. Transfers from rich to poor parts of Europe would iron out today’s enormous gaps. There is no political appetite for this anywhere, neither among elites nor among domestic publics. As a result, the survival of the Eurozone seems set against national democracy. Few accept this at present but the euro and national democracy may be incompatible.

We are right to ask if Europe can keep the peace. The answer is “no”. Peace in Europe owes much to other factors and the EU has done little to build peace beyond its borders. Peace within Europe has become fragile as the euro unleashes competitive pressures that pit national economies against one another.

Chris Bickerton, Lecturer in politics at POLIS, University of Cambridge