Improving support for pupils with English as an additional language

A new report on UK school pupils who speak English as an additional language (EAL) argues that their progression in English language proficiency, academic achievement and social integration is closely linked and that a strong professional knowledge base is needed in schools to support the pupils. The authors also argue that parents are an ‘untapped resource’ for support and social integration. The report makes a series of policy recommendations.

The report underlines the need for a holistic approach to EAL children’s experience, involving parents as well as schools

The report identifies opportunities to target outreach to parents of EAL pupils, and develop frameworks and qualifications for English language support specialists to enable better assessment of language proficiency among pupils.
The researchers, from the University of Cambridge and Anglia Ruskin University, were commissioned by the Bell Foundation to conduct a two-year longitudinal study of secondary schools in the East of England between 2013 and 2015.
The project, which took a new cross-disciplinary approach and linked quantitative and qualitative methods, involved a regional survey of 46 secondary schools as well as tracking the progress of 22 newly-arrived EAL students at two case study schools over a two year period and interviewing dozens of teachers, parents and carers.
Diana Sutton, Director of the Bell Foundation, said:
‘Crude headlines which assert that EAL children either outperform others or are a drain on scarce school resources miss the point. The picture is mixed, complex and nuanced, as this and previous research shows.’
The new research highlights the benefits which such children receive from growing up in mixed-language social groups, and gives an impression of the pace at which they start to feel a sense of belonging as well as academic achievement.
But the survey found that EAL support was uneven across different schools. While some have qualified EAL coordinators managing schoolwide support, others have teaching assistants covering the role, and some have an already overstretched subject teacher subbing in.
Key recommendations in the report include:
‘EAL coordinators’ within schools should be part of a national framework of support specialists for children for whom English is an additional language
Michael Evans, Reader in Education at Cambridge’s Faculty of Education, said:
‘There is a need to develop high quality, Masters level accredited training for the EAL co-ordinator role, akin to the requirements for the new Special Education Needs co-ordinators. The role of the EAL Coordinator should be professionalised. Networks could be established and guidelines developed and shared to raise the status of EAL support, and the prominence of those who coordinate it within individual schools, as well as the wider system.’
A model of accountability should be established, similar to Pupil Premium support for those eligible for free school meals, in which resource from the national budget is contingent on pupil progress
The report warns that there is a lack of accurate information on linguistic proficiency, which can mask EAL pupils’ academic potential. While pupils within the study developed functional oral proficiency within a year, many continued to struggle to use appropriate “academic” English.
Currently, recorded data gives no indication of an EAL pupils’ proficiency and funding is for three years only, after which there is no additional support, regardless of the pupil's proficiency in English. By contrast, in the US, assessment continues and pupils only exit the EAL status once proficiency is achieved.
Embedding EAL training in teacher training programmes, and including EAL inductions as part of the school orientation for newly qualified teachers
In interviews, the researchers found that the parents of EAL students cared considerably about the social and academic progress of their child. However, they also observed that school staff often use very limited definitions of parental engagement, such as attendance of parents’ evenings. Many parents of EAL pupils had little understanding of the school system, leaving them lacking confidence and fearful of engaging, along with barriers of language. This can lead to assumptions about parents that are ‘unlikely to represent actual level of interest’.
Encouraging parental involvement
Claudia Schneider, Principal Lecturer in Social Policy at Anglia Ruskin University, said:
‘Schools should take advantage of the opportunities offered by high levels of parental interest, by developing information and communication strategies which reflect an ‘outreach mentality’.’
‘Targeted strategies for encouraging community and parental networks could, for example, offer bilingual support by sharing translations of routine school information. Parents of EAL are significantly underrepresented in school structures, and such cost-effective networks could help integrate this untapped resource.’
The report’s authors have created a template through which newly-arrived families could be encouraged to get involved by presenting on their country of origin. They also highlight simple technological aids such as embedded widgets on school websites that allow for translated information when clicked on.
The report contains forewords by the Vice Chancellors of both Anglia Ruskin University and the University of Cambridge who both have a migration background and highlight the importance of migration for Higher Education.
Cambridge’s Vice-Chancellor, Professor Sir Leszek Borysiewicz, himself the child of Polish immigrants, wrote:
‘[T]he report underlines the need for a holistic approach to EAL children’s experience, involving parents as well as schools. It calls for evidence‐based approaches to the teaching of EAL students, for greater consistency in the assessment of their progression, and for a review of testing that may put them at a disadvantage.’
The new research builds on the Bell Foundation’s 2014 report on school approaches to the education of EAL students.
Download the Executive Summary of the 2016 report.
Download the Full Report. 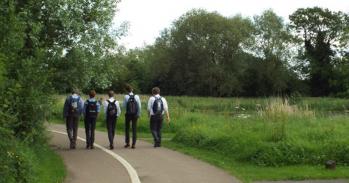