We are celebrating LGBT+ History Month throughout February with a pop-up University Library exhibition and numerous student-led events.

In flying the flag the University Library sends a clear message that it is a welcoming, open and tolerant place.

Today is the start of LGBT+ History Month, which will be marked with a series of public events at the University throughout February.

LGBT+ History Month takes place every February, and promotes equality and diversity by increasing the visibility of lesbian, gay, bisexual and trans people, their history, lives and experience; as well as raising awareness and advancing education on matters affecting the LGBT+ community.

This year, the University Library will fly the rainbow flag - the internationally-recognised symbol of the LGBT+ community - from its 157ft tall tower for the first time to mark the month, joining the many Colleges across the city who also fly the flag. The Library will host a pop-up exhibition called Queering the UL towards the end of the month, featuring a selection of LGBT+ related materials brought together for the first time from the more than eight million items which form the library’s 600-year-old collection. Items on display range from the 11th century to the 21st, including evidence of gay life in medieval Cairo, gender fluidity in 18th century Japan and ephemera from the vibrant LGBT scene in 1970s' Latin America.

Liam Sims, Rare Books Specialist, said: “Since its appearance in San Francisco in 1978 the rainbow flag has symbolised both the diversity of the LGBT+ community and the pride felt by its members, and in flying the flag, the University Library sends a clear message that it is a welcoming, open and tolerant place.”

Dr Jessica Gardner, University Librarian, said: “In joining with other institutions across Cambridge also flying the flag we show that our city and university are places where people can be themselves without fear of discrimination.”

A number of student-run events are taking place this month, coordinated by the Cambridge University LGBT+ Campaign. A calendar of events is available on their Facebook page.

In addition to University and College events, there are many events taking place around Cambridgeshire to mark LGBT+ History Month. Further details are available on the Encompass website.

Cambridge University Library celebrates LGBT History Month: rainbow flag flies from our iconic tower to show our city and university are places where people can be themselves without fear of discrimination. https://t.co/R6a0sfVWxP pic.twitter.com/haiJ1fiQKG

We're flying the flag today for the start of #LGBTHM18! There are a lot of events in Cambridge this month, and we're excited to be hosting a panel on 'Queering Britain's national heritage". Details here: https://t.co/oh53ZStJoH pic.twitter.com/NqdZ1KOkQL 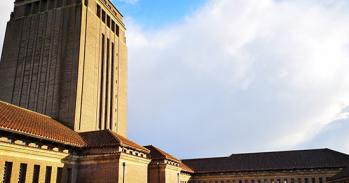