Return of the Titan

Cambridge University Botanic Garden is awaiting the Return of the Titan. One of the two Titan Arums held in the Garden’s collection of plants will very soon produce another huge, magnificent flower along with the noxious smell that accompanies it.

As a Botanic Garden, one of our key roles is conserving plants and caring for rare plants such as the Titan.

Staff at the Botanic Garden are asking Friends and visitors to help name the new arrival.

Director Beverley Glover said: “We are delighted to announce that we have yet another Titan Arum plant preparing to flower – we think, within the next week! This will be the third flowering of a Titan Arum here at the Garden. Visitors may remember our ‘Tiny’ titan flower back in 2015. The Titan plant about to flower is our other plant that last flowered in 2004 and we are asking our visitors to help name our new arrival!”

The Garden will be setting up a Twitter poll asking followers to vote for their favourite name from a shortlist of four: Yoda (as the plant is currently small and green and will display something resembling a lightsaber as it heats up); Arnie (‘I’ll be Back…’); Morph and Titus (both from the plant’s Latin name Amorphophallus titanum).

Added Glover: “Our last Titan was aptly named ‘Tiny’ as it took us by surprise by flowering from a very small tuber – usually flowers only arise once the plant’s tuber weighs over 15kg. The plant about to flower is similar in weight but we are anticipating a larger flower because measurements are suggesting it’s going to be big. We’ve come up with a straw poll of names chosen by staff and we’d love our visitors to have the final say."

Native to Sumatra in Indonesia, the Titan Arum, (Amorphophallus titanum), produces one of the largest single flowering structures in the world. Also known as the corpse flower, it has the ability to self-generate heat by a process known as thermogenesis. It heats up on the first night of full flowering to produce a stench of rotting flesh that in the wild attracts carrion beetle pollinators over vast distances. The flowering structure lasts 2-3 days only.

“The Titan Arum is a fascinating plant to see in flower and flowering only really happens about once every decade, so it will be around another ten years before we witness this smelly spectacle again at the Garden," said Glover. "We really want to encourage people to take this opportunity to come and see this wonder of the plant world. We’re delighted to share this exciting moment with as many people who want to come and witness it as possible and we will keep the Garden open late on the two nights it chooses to flower."

Horticultural staff in the Garden realised the new bud on the Titan plant was in fact a flower, not a leaf, just a week ago.

The flowering structure currently consists of an upright, creamy, spike-like spadix, embraced by a frilly, pale green spathe which is a highly modified leaf that forms a protective chamber around the ‘proper’ flowers which are clustered at the base of the spadix. The frilly spathe turns blood red on flowering and this is when the spadix starts to heat up and releases strong smelling sulphurous compounds to attract the pollinators and lure them to the clusters of true flowers at the base of the spadix.

In the wild, it is understood that carrion beetles pollinate the plant with pollen from another Titan Arum plant. Pollination of female flowers clustered in rings at the base of the spadix occurs as the insects search for what they believe to be rotting meat. On the second day, the stench begins to fade and the plant’s male flowers open to release pollen onto the beetles as they depart, having searched in vain for a flesh feast. On the third day, the spathe closes up and eventually the spadix collapses.

Glover said: “The Titan Arum has a limited natural distribution, but with increasing habitat loss due to deforestation and habitat degradation, it is categorized as a vulnerable species by the International Union for the Conservation of Nature. As a Botanic Garden, one of our key roles is conserving plants and caring for rare plants such as the Titan so that we can share our understanding of them and help as many people as possible to learn about these amazing plants.

“We’d love to be able to produce and nurture fruit and seed – to grow baby Titans from this plant. This is a tricky task but we have frozen pollen from ‘Tiny’ and we’ve also put out a call to other Botanic Gardens worldwide to see if they have fresh, younger pollen so that we can cross pollinate. Chicago Botanic Garden recently had Titan twins so we hope to receive some pollen from them as well as from the Royal Botanic Garden Edinburgh. Rarely does this plant fruit in cultivation and we’d love to play our part in conserving this tropical giant.”

The Titan Arum is a difficult species to grow. It is demanding in its cultivation requirements, and generally unpredictable in flowering. It requires a high temperature along with high humidity to flourish, and also sufficient space to develop a large tuber, and in which to accommodate the flower. Considerable horticultural skill and knowledge is required to nurture this species from dormancy to flower.

Daily measurements will be tweeted from the Garden’s Twitter feed @CUBotanicGarden and a live web cam feed will be available from the Garden’s website www.botanic.cam.ac.uk so #ReturnOfTheTitan followers can watch the flower unfold. 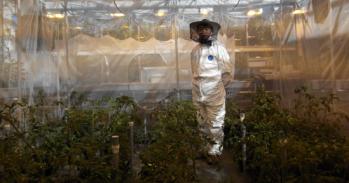 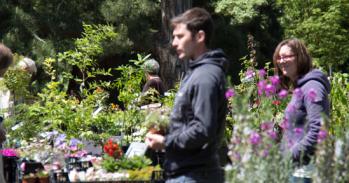