Cambridge University Bursaries help with students’ academic outcomes, wellbeing and university experience, a new report from the University’s Faculty of Education has found.

Students from families whose household income is £25,000 or less automatically receive a non-repayable annual bursary of £3,500 at Cambridge. Students who are not dependent on their parents (including those who are estranged) get a higher bursary of up to £5,600 a year and also the possibility to stay in Cambridge year-round.

They told researchers from the Faculty of Education that without it, they would have struggled to pay for books, rent and even food without taking out further loans.

One of the key findings of the study was that this financial support offered needed to be advertised more clearly since some recipients had been unaware of it before applying. As an important factor in students’ choice of university, communicating the availability of the bursary could boost efforts to widen access to Cambridge.

The Cambridge Bursary Scheme allocates £6.8million a year in bursaries to financially disadvantaged students. Of those who received a bursary, 87% said financial support made them feel less anxious, 90% said it helped them focus on their studies and 74% said it helped them have a work-life balance.

It also helped alleviate concerns around being a burden on their families – whose ‘hidden contribution’ to university funding has come under increasing public scrutiny. One student interviewed for the study said having a bursary was “a huge relief not only off my shoulders but off my parents’ as well” while another commented: “I probably would have been able to pay [my study costs] with the help of my parents but it would be very difficult for them…they were not sure about the next four years’ employment; it would be risky, a difficult decision for us.”

Many noted that it helped them overcome fears they wouldn’t fit in at Cambridge, with one student commenting: “The fact that the university was willing to invest in funds to make sure that people like me could come to university made me feel less nervous about applying and less nervous about fitting in socially as well.”

Students used their bursaries to cover food and living costs plus ‘one-off’ purchases such as a computer, specialist equipment, specific editions of books, new clothes, shoes, or a bicycle. Some saved money for course-related travel, with one interviewee’s field trip forming a significant part of their chosen dissertation topic.

Researchers compared students’ views gained through surveys and interviews with an analysis of data related to drop-out rates, class of degrees awarded and graduate employment, using a methodology developed by higher education regulator the Office for Students.

This found students from households with the lowest declared incomes perform at least as well, if not better, than peers from better-off families.

In addition, students with a full bursary who came from schools historically under-represented at Cambridge or those from relatively low-performing schools performed as well academically as those from households with higher incomes.

More than 96% of students finish their degrees at Cambridge, and researchers found there was no correlation between drop-out rates and socio-economic backgrounds. At least 85% of bursary recipients were in graduate jobs or further study six months after leaving university.

Co-author of the study Dr Sonia Ilie, Senior Research Fellow at the Faculty of Education and Hughes Hall, said: “Fair access to higher education is not just about entry: across the sector there is concern that lower socio-economic backgrounds should not be associated with lower outcomes or lower completion rates, and that students should be supported to make the most of their experience in a way that sees any financial barriers fall away.

“Across all of our analyses we found evidence that broadly speaking, the Cambridge Bursary Scheme operates as intended, with very few, if any, differences in outcomes by students’ economic background.

“There is still work to be done, though, and we’re undertaking research to understand the impact of different levels of financial support, and build more evidence about how the current system can be improved.”

Students interviewed by researchers listed the financial support available at the University of Cambridge as among the reasons they applied. However, 40% admitted not knowing if they would be eligible for it when applying.

Senior Pro-Vice-Chancellor Professor Graham Virgo: “Cambridge is committed to fairness in its admissions processes and to providing a level playing field for its students once they are here.

“By bridging the gaps in student finances experienced by those coming from households with low incomes, our bursaries help everyone to get the most out of a Cambridge education.

“However, this report gives us a clear message, which is that if more students from low-income households knew how much financial support was available at Cambridge, more would apply.

“This is something we will be looking at as a matter of urgency.

“We do not want anyone who has the ability and drive to thrive here to rule out Cambridge on the basis of cost.”

Jesus College Fellow and Professor of Education Anna Vignoles provided support to the researchers: "This report provides valuable evidence on the effectiveness of the Cambridge Bursary Scheme, and is part of wider University efforts to take an evidence based approach to further development of their policies in this area.

"We now need to work out the best way of letting potential students know that this support is available.”

Bursaries are awarded to students from households with an income between £25,000 and £42,620 on a scale linked to their household income.

Some students can access up to £5,600 a year if they are classed as financially independent, which includes care leavers, mature students and independent students.

More information is available on the University’s undergraduate web portal.

If you would like to learn more about supporting the Cambridge Bursary Scheme, please visit: www.philanthropy.cam.ac.uk/undergraduatebursaries 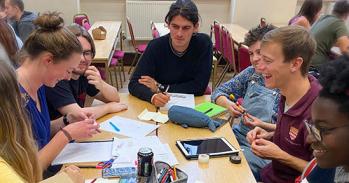