The ‘monuments men’ were a multinational unit of the Allied Forces who operated behind enemy lines during the Second World War to safeguard artistic and cultural treasures. Among them was historian Ronald Balfour, Fellow of King’s College, who lost his life 69 years ago.

No age lives entirely alone; every civilisation is formed not merely by its own achievements but by what it has inherited from the past. If these things are destroyed, we have lost part of our past, and we shall be the poorer for it.

On 10 March, 1945, a single shell landed in Kleve, a town close to the Dutch border in northern Germany. Kleve was badly bombed by Allied Forces and much of its medieval centre had already been destroyed. According to reports the shell that fell into the street near Kleve railway station on a spring day almost 70 years ago killed just one person, an Englishman called Ronald Balfour. 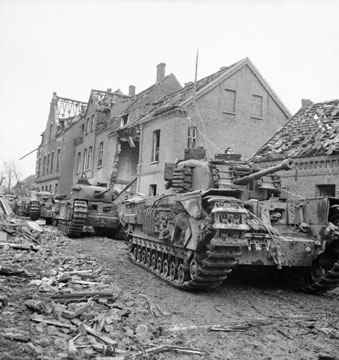 A slightly built, short-sighted historian, Balfour was a member of the Monuments, Fine Arts and Archives (MFAA) section of the Supreme Headquarters Allied Expeditionary Force and had received basic military training before taking up his post just a few months earlier. At the time of his death he was operating beyond allied lines in the chaos of disputed territory.

With the help of a small group of German civilians Balfour was transporting treasures, removed from Christ the King Church in a suburb of Kleve, to safety in nearby Goch.  When the shell hit, Balfour was on one side of the road and his companions were on the other with a handcart carrying the artefacts. Balfour’s companions were unharmed as were the church treasures. A few weeks later the local German forces surrendered and by the end of April war in Europe had come to an end.

The film, Monuments Men, released last month, has drawn public attention to the role of the MFAA in safeguarding at least some of the heritage of war-torn Europe. MFAA was American-led and had a multinational membership of around 350 men and women. The movie is based on a book (The Monuments Men by Robert M Edsel) and billed as telling a “true story”.  But according to the Balfour family, Donald Jeffries, the English ‘monuments’ man’ in the film (played by actor Hugh Bonneville), is quite unlike Ronald Balfour.

Balfour was 40 when he enlisted in MFAA and just 41 when he died. When he signed up to join the MFAA, Balfour must have seemed an unlikely candidate for military service: he was a specialist in medieval history; he was slim in build and wore thick pebble glasses. He was a Fellow of King’s College and his entire adulthood had been devoted to scholarship. What motivated him to risk his life was his passion for art and history. 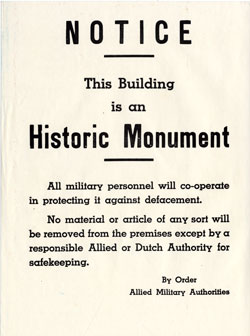 In his will, Balfour bequeathed his personal library of 8,000 books to be shared between Cambridge University Library and King’s College Library. King’s College was also given several boxes of Balfour’s papers with his family donating further papers in 2005 and 2006. The most recent accession includes the last letter that Balfour wrote to his friend and superior officer Geoffrey Webb. Just a few days before his death, Balfour wrote about how much he enjoyed his work despite the hazards.

“It has been a grand week, certainly the best since I came over. One has the tragedy of real destruction, much of it quite unnecessary, but the compensating feeling of getting something done oneself. No civil authority to worry about and the need for quick decisions on one’s own responsibility... The degree of looting is terrible.. it will be a pretty business if all the repositories of foreign works of art are treated thus.”

Newspaper reports suggest that in a few months Balfour and his colleagues had been successful in saving some of the heritage of several towns in northern Germany. An article in the Rheinische Post in 1955 records: “With his own hands Balfour salvaged from amidst the rubble of destroyed buildings the archives of several towns, including those of Goch, Kleve, Cranenburg and Xanten.” 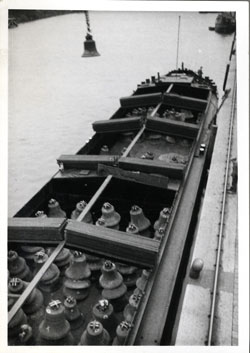 The archive of Balfour’s papers at King’s College also contains evidence of his determination to impress upon his army colleagues the importance of preserving the cultural heritage of the territories they would be going into as an invading force. In a speech he prepared but never delivered he wrote: “No age lives entirely alone; every civilisation is formed not merely by its own achievements but by what it has inherited from the past. If these things are destroyed, we have lost part of our past, and we shall be the poorer for it.”

It’s a message that resonates today. Patricia McGuire, King’s College Archivist, said: “The Balfour papers offer significant insight into the critical work of the MFAA in preserving tens, or even hundreds, of thousands of works of European art. Containing Balfour's own postcards and photos from visits he took before the war, personal letters, testimonial memoirs as well as professional reports, the collection provides a personal view that the official papers alone cannot.”

For more information about this story contact Alexandra Buxton, Office of Communications, University of Cambridge amb206@admin.cam.ac.uk 01223 761673.