Layers of history dating from the Bronze Age to World War II trenches have been uncovered at one of the largest archaeological excavations in Britain - the site for the University of Cambridge’s £1 billion North West Cambridge Development.

Experts from Cambridge Archaeological Unit who are leading the dig have uncovered five separate cemeteries, two funerary monuments, two Roman roads, ring-ditch ‘circles’ and thousands of finds including some 30 cremation urns, 25 skeletons, a military spearhead and an array of brooches, plus quantities of slag attesting to significant iron-working.

They believe the site was first colonised for settlement in the Middle Bronze Age (c.1500BC) and subsequently saw Iron Age settlement (c.500BC-50AD). 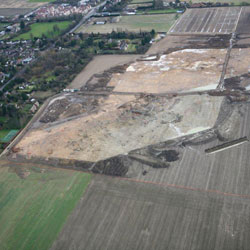 Christopher Evans, head of the Archaeological Unit leading the dig said: “This scale and scope of excavation work has not been attempted before. For more than a millennium, the landscape of the site has been uninterrupted farmland.

"We have discovered that vibrant prehistoric settlements inhabited the land and settlements grew with complexity in the Roman age.”

120,000 cubic meters of topsoil have been moved and the excavation area covers 14 hectares of the 150-hectare development site for North West Cambridge.

It is believed that the dig will uncover a landscape larger than Roman Cambridge itself. Complex networks of communities and the road alignments that have been discovered provide insights into the nature of the Roman landscape.

Archaeologists believe the countryside was lattice-like, criss-crossed with roads and trackways that linked up its many farms and settlements.

As part of the Cambridge Science Festival, Cambridge Archaeological Unit will be hosting a Roman Street Party at North West Cambridge, with re-enactors, catapults and artefacts, between 11am and 4pm on Saturday, March 23. Those attending will be the first to hear about the new discoveries, and will get to see and feel the artefacts. The event will include hands-on activities for children and adults alike as well as intellectual challenges for the more discerning party goer.