Massive unemployment, the end of the miners’ strike and a controversial decision to try and exclude the Prime Minister from a Falklands War memorial service at St Paul’s are some of the issues revealed by the release of Margaret Thatcher’s personal papers for 1985.

Kindly ask the secretary of state to see me immediately.

Held by the Churchill Archives Centre at Churchill College, 43,000 pages of papers will be opened to the public from Monday, revealing in close detail the concerns, challenges and crises faced by Thatcher during a year which marked her tenth anniversary as leader and the halfway point in her premiership.

Thatcher’s papers also reveal growing disquiet within Tory Party ranks about Labour’s recovery following the miners’ strike, as well as a general sense of Conservative malaise, and the wrangling Prime Minister Thatcher underwent as she planned and announced her Cabinet reshuffle.

Chris Collins from the Margaret Thatcher Archives Trust, which owns the papers, said the newly-released documents give a sense of the pressures on Thatcher, both domestically, internationally, and closer to home – with her press secretary attempting to soften the image of the Iron Lady.

“The early papers for 1985 are dominated by the unfinished business of the coal strike,” said Collins. “Thatcher’s advisers were worried that Arthur Scargill might still manage to find a way to out-manoeuvre them. The papers show Thatcher closely involved in the aftermath of the strike. Although its outcome is now seen as decisive, the possibility of another strike was not discounted at the time. Thatcher wrote a note on March 7, 1985 saying ‘what a relief it’s all over… we shall rebuild stocks of coal at power stations as a first priority.’”

Elsewhere, Thatcher wrote: “We have shattered the myth that the miners can always bring a government down. And it is clear beyond all doubt that we will never give in to violence.”

But the end of the battle with Scargill and the miners did not provide the boost to Conservative popularity that many in the party imagined. In fact, Thatcher’s papers for 1985 suggest the reverse is true with press secretary Bernard Ingham’s press clippings showing how Labour leader Neil Kinnock’s conference speech won plaudits from both the Sun and the Daily Mail.

Perhaps one of the most curious revelations from the release of this year’s papers comes via the many pages of correspondence generated by multiple branches of the government machine over Thatcher’s potential non-attendance at a St Paul’s memorial service.

The papers for 1985 reveal that the Church of England and Downing Street clashed over proposals to exclude the Prime Minister from the unveiling of the Falklands Memorial at St Paul’s Cathedral.

Thatcher was said to have responded angrily to suggestions that there would not be room for her in the crypt alongside the Queen, church and military officials. The row followed a high-profile falling-out between Mrs Thatcher and the then Archbishop of Canterbury Robert Runcie after the latter had prayed for Argentinian dead in a 1982 memorial service.

Defence Secretary Michael Heseltine unwisely allowed a letter to reach the Prime Minister showing him signing off on the agreement to hold the service without her. On the letter, in Mrs Thatcher’s own hand, she has scrawled the words which must have made many a minister’s blood turn to ice: ‘Kindly ask the secretary of state to see me immediately.’ The word ‘immediately’, just in case her displeasure was unclear, is underlined twice.

Thatcher's angry response to the plan to exclude her from the Falklands memorial service. 1 of 2

Mrs Thatcher’s lack of popularity with the Church of England also seemed to be reflected in the national approval ratings for the Prime Minster and her party as unemployment figures stayed stubbornly above the three million mark throughout the year.

Added Collins: “Private as well as published polling showed the Conservative party falling badly for much of the year, moving into third place in May behind Labour and the SDP-Liberal Alliance. By August, the position seemed worse still. Approval of the government’s record was at minus 42 per cent. Thatcher’s personal rating was minus 35 per cent and the party remained well adrift of its two main rivals in the Tory party’s private polls.”

The disastrous polling figures may have informed attempts by Thatcher’s press secretary Bernard Ingham to soften her image. Ingham, whose papers are also held by the Churchill Archives Centre, sent a five-page memo to the Prime Minister warning that she had gained a public image as “hectoring, strident and bossy”.

Ingham’s plea to employ a softer rhetoric, including the words ‘compassion’ and ‘caring’, seem to have largely fallen on deaf ears as she shied away from using such language in her party conference speech that year.

Added Collins: “Looking at the document there is no sign of dissent from Thatcher; no scribbled notes or underlining like you often see on her personal files. But she simply would never have worn her heart on her sleeve like that, partly because it would have gone against her instincts, but also because, by that point, it would have seemed inauthentic.”

“Her public image was so fixed that she couldn’t win. If she had suddenly shown a softer side, people would not have believed it.” 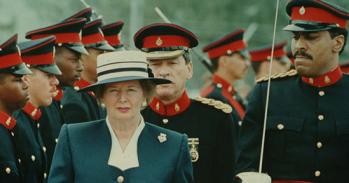