Remembering and celebrating the rich thousand-year Jewish dimension of Poland’s history will be the theme of the first major event hosted by the recently-launched Cambridge Polish Studies, an initiative of the Department of Slavonic Studies.

The POLIN Museum of the History of Polish Jews was opened in Warsaw only last October.

On the site of the former Warsaw Ghetto, it is a spectacular modern award-winning building with extensive collections presenting the whole thousand year history of the Jewish community in Poland, once the largest Jewish Community in the world, which was almost entirely destroyed during the Holocaust.

“A virtual tour of the POLIN Museum of the history of Polish Jews in Warsaw” is a free event on Friday 16 January from 5pm in the William Mong Hall at Sidney Sussex College.

The Museum’s Programme Director Barbara Kirshenblatt-Gimblett will conduct a stunning virtual tour illustrating the museum’s philosophy and how Poland is rediscovering the Jewish dimension of its history.

This will be followed by a broader discussion on the subject of Jewish memory in contemporary Poland with Dr Roma Sendyka, a researcher at the Jagiellonian University in Krakow.

Cambridge Polish Studies was launched in October 2014, like the Museum, in the University’s Department of Slavonic Studies.

This innovative pilot initiative – sponsored by the Foundation for Polish Science (FNP), the M. B. Grabowski Fund, Trinity College’s Zdanowich Fund, and the School of Arts and Humanities – combines undergraduate education in Polish literature and language with a rich cycle of special events, including guest speakers, public debates, film screenings, and academic conferences.

The initiative aims to make Cambridge a key centre for the study of Poland in the UK and beyond.

Dr Stanley Bill, the new Lecturer in Polish Studies, said: “We cannot understand the history of Polish culture without the Jewish thread. For centuries the Polish lands were a place of refuge for the Jewish people and a hotbed of religious and cultural innovation.

“Today, many Poles are keen to rediscover this aspect of their own history, learning about the vibrant communities that formed an important part of Polish life before the Nazi genocide. The POLIN Museum of the History of Polish Jews is already making a crucial contribution to this process.”

Before coming to Cambridge, he worked at the Jagiellonian University in Krakow, Poland.

He did his Ph.D. in Comparative Literary Studies at Northwestern University in the United States. He originally hails from Perth, Australia.

This event is part of an emergent research cluster within the department concentrating on the shared multicultural heritage of today’s Poland and Ukraine.

In Easter term, the eminent Polish philosopher Agata Bielik-Robson will come to Cambridge to discuss the work and legacy of the great Polish-Jewish writer, Bruno Schulz, who was murdered by the Nazis in 1942 in a region that now belongs to Ukraine.

In June, Cambridge Polish Studies will organize a major international conference on Polish-Ukrainian relations in partnership with Cambridge Ukrainian Studies.

For free registration for the event on 16 Januaryclick here 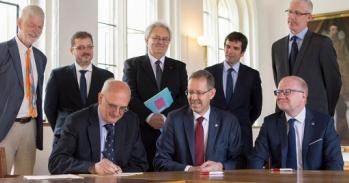