This week, work begins on the next phase of development for the Square Kilometre Array radio telescope, with the University of Cambridge leading major ‘work packages’.

The Square Kilometre Array (SKA) is likely to revolutionise our understanding of the Universe - as it will be able to detect radio waves with unprecedented sensitivity and image fidelity - and could help unravel some of the biggest mysteries in the Universe such as the role of dark energy and dark matter.

Even in its earliest phase (SKA1), the radio telescope will be the fastest and most sensitive in the world.

SKA1 is now entering the “detailed design” stage, in which design work and concept selection will be done. The SKA1 observatory will consist of three world-beating instruments.

A total of 250 dishes will work as one machine in South Africa’s Karoo desert to detect mid-range radio frequencies. A further two instruments will be in the Western Australian desert: one being an array of many hundreds of aerial clusters working at low radio frequencies, the other a range of around 90 dishes - each equipped with a ‘Phase Array Feed’ to expand the field of view.

Construction on all three sites will commence in 2018 with completion aimed for 2023.

Cambridge is leading the 'Science Data Processor' (SDP) consortium for SKA1. The SDP work involves designing the hardware and software for the massive scale of data processing required for the project, building on decades of local expertise.

The University’s High Performance Computing service will house a laboratory to test computer implementations and scalable architectures for the enormous proportions that SKA requires.

“We are thrilled to be able to build on the decades of expertise we have in the University to contribute to the SKA project, which is the exemplar “big data” project of this generation,” said Professor Paul Alexander from the Cavendish Laboratory, who is leading the Cambridge work.

To complete the three year, €18 million detailed design project, the Cambridge team is working alongside over two dozen academic partners across the UK and the globe, including ICRAR and CSIRO (both in Australia), SKA SA (in South Africa), ASTRON (in the Netherlands) and partners in Canada, as well as representation from a number of industrial partners.

“The SKA is a complex system, with computing requirements varying greatly depending on the science modes the instruments are in: imagining these 'use scenarios' and planning for this flexibility is an exciting challenge” says SDP project scientist and Cambridge researcher Rosie Bolton.

These antennas operate at long radio wavelength (up to 6 metres), and each is around 2m tall. SKA1 will require a quarter of a million such antennas, so each must be designed to be inexpensive and easily deployed - as well as meeting the stringent science criteria. 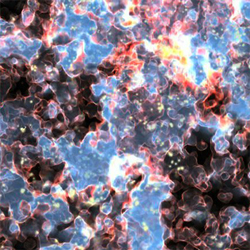 These antennas will be used to measure the very faint signals from the Epoch of Reionisation, back from the dawn of the Universe, when the first stars were switching on and beginning to ionize the hydrogen gas surrounding the galaxies.

“These low-frequency antennas are going to do the most exciting science of the first phase of the SKA,” said LFAA Project Engineer Andrew Faulkner from the Cavendish’s Astrophyics group.

“We can see the different states of the hydrogen gas and use this information to constrain our models of the early Universe.”

Inset image: Simulated hydrogen in the Epoch of Reionisation, which will be probed with SKA1. Image credit: SKA Organisation / Swinburne Astronomy Productions

Growing Underground: smart farming in the heart of London