Uncovering the text of the New Testament

A £1.1m campaign by Cambridge University Library to secure one of the most important New Testament manuscripts – the seventh-century Codex Zacynthius – has been a success.

Codex Zacynthius can now take its rightful place among our world-renowned faith collections.

Cambridge University Library reached their appeal target after the National Heritage Memorial Fund recognised the importance of the Codex Zacynthius and stepped in with a grant of £500,000.

Such early manuscripts are extremely sought after as invaluable witnesses to the development of the text of the New Testament. The manuscript will now undergo multi-spectral imaging and XRF spectroscopy to enrich a new generation of research on the text.

Cambridge University Librarian Anne Jarvis said: “Since launching our appeal in December 2013, we have been delighted and humbled by the donations and support we’ve received.

“That support, especially from the National Heritage Memorial Fund, means that Codex Zacynthius can now take its rightful place among our world-renowned faith collections.”

Fiona Talbott, Head of NHMF, said: “The Codex Zacynthius has been part of the UK’s heritage for over 200 years and is a truly fascinating and unique object. Our trustees felt it was incredibly important that it should be safeguarded so future generations can explore its undiscovered secrets.”

The huge appeal of this unique item lies in its hidden backstory. Codex Zacynthius is a palimpsest: a manuscript from which the text has been scraped or washed off in order for it to be used again. The recycling of manuscripts was common practice at a time when writing surfaces were precious, few books were produced, and a tiny percentage of the population was literate.

Codex Zacynthius is so-called because it resided on the Greek island of Zakynthos (also called Zante), although its original place of composition is unknown. Its 176 leaves are made of parchment – treated animal skin. The surface of the parchment was first used at the end of the 7th century when it was inscribed in Greek with the text of Luke 1:1–11:33 – a layer of writing now known to scholars as the ‘undertext’. In the 13th century this was partially scraped away and written over with the text of an Evangeliarium, a book composed of passages from the Four Gospels – this is the ‘overtext’.

Lord Williams of Oystermouth, the former Archbishop of Canterbury, who supported Cambridge’s fundraising campaign, said: “The discovery and identification of the undertext represents a fascinating detective story. By securing the manuscript, we hope that multispectral imaging techniques will enable scholars to recover fully the hidden text.”

Establishing the definitive text of the New Testament came late to Christianity and the Textus Receptus, produced by the great Dutch humanist scholar Erasmus (1469-1536), was for centuries the standard printed edition, despite its shortcomings. It was based on only six manuscripts and included parts of the book of Revelation that Erasmus had translated into Greek himself, from a Latin edition, since he didn’t have a complete manuscript of the Greek text.

Codex Zacynthius was deposited at Cambridge University Library in 1984 by the British and Foreign Bible Society, which has owned it for almost 200 years. The Bible Society wished to sell Codex Zacynthius as part of an exceptional exercise to release funds to establish a new visitor centre in Wales. 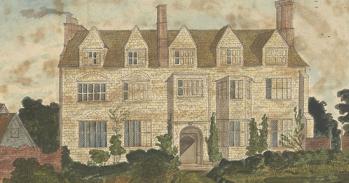