Sperm will take centre stage at a conference in Cambridge later this week as researchers from a wide range of disciplines gather to consider the narratives that surround the male gametes necessary for human reproduction.

In 1881 a German couple – Herr and Frau B - were trying to get pregnant with no success. They consulted Dr Levy, a gynaecologist based in Munich, for help. Levy was determined to approach the problem in a scientific manner and make a thorough investigation into the man’s fertility.  Over a period of several months, Levy made 12 pre-arranged home visits to the couple to conduct a study that he knew to be fraught with “obnoxiousness”.

To determine whether the ejaculate contained living spermatozoa, Levy took mucus from the woman’s vagina and cervix shortly after the couple had had sex and while the woman was still resting in the marital bed. The microscope Levy brought with him revealed that Herr B was sterile, a condition that a tough regime of physical exercise and the faradisation (treatment with electrical currents) of his testicles would prove unable to change. After trying for years to conceive a child, Herr and Frau B were reported to be content to have done their duty by exploiting every possibility that modern medicine had to offer.

The case of Herr and Frau B, and the ordeal they underwent 130 years ago, is taken from the medical literature that forms the primary source of research by historian Dr Christina Benninghaus, who has worked at Cambridge for the past two years. At a conference later this week she will give a snapshot of her research into the history of human reproduction in the decades around 1900 and, in particular, the emergence of medical studies of male infertility. 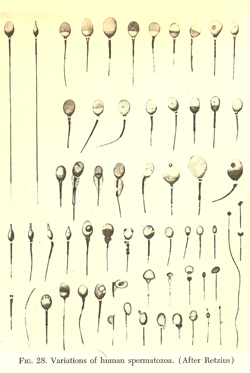 “Knowledge about some vital aspects of human reproduction was hazy. The concept of hormones had not been developed and the connection between menstruation and ovulation had yet to be fully understood.  However, infertility was already an important sphere of medical intervention. Inflammation of male and female reproductive organs was treated with ointments, douches and massages. Women, and sometimes men, were sent to watering places to improve their health, couples were offered sexual advice, and attempts at artificial insemination were not unheard of,” said Benninghaus.

Surgery was also undertaken to increase the chances of conception.  And it was often, though not exclusively, directed at the female body.  Attempts at widening the cervix and at repositioning the uterus were not only painful, but also dangerous, and from the 1870s their effectiveness was very much doubted. To spare women from unnecessary surgery, gynaecologists increasingly considered the possibility of male sterility and advocated sperm testing.”

Experts debated how best to engage with male patients unwilling to agree to testing.  Benninghaus explained: “Physicians were eager to spread knowledge about male sterility through talks and publications. And they warned the public that men often infected their wives with gonorrhea, a major cause of both male and female infertility. The association of male sterility with lazy or dead spermatozoa – an image that would not have made sense to earlier generations – now entered the public imagination.”

Benninghaus is one of a dozen speakers who will, during the course of the two-day conference, consider the narratives that surround sperm: our historically changing understanding of its biological make-up and its contribution to the process of generation, its materiality as a marker of collective health, its identity as a scientific object and a commodity, and its symbolic value within shifting perceptions and negotiations of masculinity.

As an experience central to life itself, and with technologies offering new possibilities, human reproduction recognises no neat disciplinary boundaries. When Benninghaus sat down with Cambridge University sociologist Dr Liberty Barnes to plan a meeting that would encourage wide-reaching conversations, they opted to bring together historians, sociologists and anthropologists to look at the topic of sperm, and male infertility, from a broad range of perspectives.

Barnes said: “What’s cool about the conference is that we contacted a bunch of male infertility scholars and invited them to submit paper abstracts -- and nearly all of the submissions were about sperm.  Tiny sperm tell big stories. Sperm serve as something akin to cultural

artefacts for telling all kinds of stories about human history and social problems.”

Since the 1960s a revolution has taken place in reproductive technologies – such as IVF, sperm and egg donation, and surrogacy – and has been accompanied by shifts in social attitudes. Increasingly available across the globe, these developments have challenged the meanings of family and kin, reproduction, and opened up new routes for mothering or fathering a child. Most recently, the use of mitochondrial transplantation (resulting in an embryo with genes from three biological parents) has led to intense ethical debate.

Advances in reproductive sciences have inspired new strands of academic research. The ethical debates surrounding the new technologies, and their very real consequences for the lives of people worldwide, have encouraged historians to look more closely at the history of reproduction and how past narratives continue to inform the way we navigate these matters today.

Recent studies have re-examined common assumptions like the belief that infertility was routinely ‘blamed’ on women primarily to save men from the social stigma of impotency. Benninghaus’s research reveals that this was far from the case. Her study of the medical literature from the second half of the 19th and the early 20th century reveals that medical experts took a great interest in male sterility in order to help families have children.

“Increased efforts to identify the causes of male infertility were prompted by a deadlock in the diagnosis and treatment of female sterility, paired with a continuous demand for treatment, growing interest in microscopy and the possibilities it offered, and a new understanding of the dangers of venereal disease,” she said.

“The impulses for greater research into the morphology and the physiological functions of sperm came not just from within science and medicine but also from patients who expected medicine to provide an answer to their quest for a child. Already a century ago, couples experiencing infertility, had to make choices regarding the kind of treatment they wanted to pursue and they had to come to terms with diagnoses that could be devastating.”

The proliferation of assisted reproductive technologies (ART) around the globe in recent decades has inspired the work of many sociologists and anthropologists. While most ART research has focused on women’s experiences, this week’s conference considers the role of men (and sperm) in new reproductive science. For example, Barnes’s research shows that infertile men are willing to undergo rigorous and painful procedures to increase their sperm production and restore sperm to their ejaculate to make “natural” conception possible.

Sperm stories are about more than making babies. Robert Pralat, a PhD candidate in sociology at Cambridge, will draw attention to the fact that semen, the fluid containing sperm, can be both reproductive and destructive. Pralat will talk about the different roles semen plays in donor insemination and in HIV infection. He said: “It’s interesting how little dialogue there has been between scientists working on assisted reproduction and those that work on sexually transmitted diseases. After all, they are interested in the same substance! An interdisciplinary conference is a great opportunity to make those kinds of connections.”

Pralat’s research explores two challenges that face British healthcare: the shortage of ‘high-quality’ sperm, with many donation programmes relying on supplies from overseas, and the ‘surplus’ of infected semen, with new HIV infections among gay men at an all-time high. He said: “It’s ironic that while fertility clinics struggle to provide their services because of the lack of sperm, the uncontrollable spread of semen poses the main challenge for HIV prevention.” Pralat will ask whether the two areas of scientific study and clinical practice can learn anything from each other in addressing these challenges. 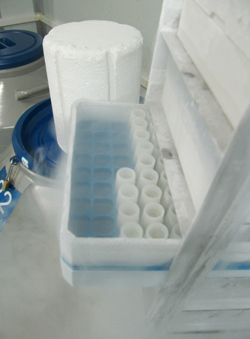 Because sperm can be easily assessed and analysed, they now serve as indicators of national health, enabling researchers to track changes in count, size, shape, and make-up across time and space. Dr Janelle Lamoreaux, a medical anthropologist at Cambridge, will look at the work of scientific laboratories in China that study environmental degradation by observing changes in sperm cells across the Chinese population. Her paper explores the ways both scientists and social scientists envision and establish the relationship between exterior environmental problems and interior reproductive health concerns through sperm.

"Sperm has become an important object in analyses of intertwining human and environmental health in China.  The anxiety around declining national sperm counts is certainly about the threat to male reproductive capacity that reduced sperm quality and quantity might bring. But this anxiety is also about China’s potentially infertile future as it relates to environmental destruction amid rapid industrialisation, development and social change. Anxieties about the nation, masculinity, and environmental destruction are produced and reproduced through sperm," she said.

While much social scientific research on male infertility concentrates on clinical settings, Lamoreaux's research among toxicologists, who study sperm as a means of understanding toxic exposures, offers a perspective that stresses the connections between male reproductive health and environment, economy, and industry.

Con/Tested: Sperm Science, Sterility and Masculinity takes place at the Department of Sociology in Cambridge on 11 and 12 September, 2014.

The conference is sponsored by: the Wellcome Trust; the Sociology of Health and Illness Foundation; ReproSoc, the reproductive sociology research group led by Dr Sarah Franklin; and Generation to Reproduction, a research programme led by Dr Nick Hopwood in the Department of History and Philosophy of Science.

Christina Benninghaus has recently taken up a position at the University of Gießen. Her two-year stay at the Department of History and Philosophy of Science at the University of Cambridge was made possible by a senior “Mobility for the Humanities” Fellowship provided by the Gerda-Henkel Foundation.

Image from a popular French guidebook for infertile couples, published in 1888