The conflict in Syria has left the country’s higher education system “fragmented and broken”, with universities suffering politicisation, militarisation and human rights violations including disappearances and murder, according to researchers from the University of Cambridge and Syrian academics in exile.

One of the professors was dragged away by two security officials in front of the students. That professor was taken to prison and charged because of his political views

The findings, which draw on interviews conducted remotely through secure apps with academics and students still active in Syria, paint a devastating picture of the impact of the war on all aspects of university life. Consequences range from the destruction of facilities and terrorising presence of security forces on campus to the forced displacement of students and faculty members and near disappearance of research.

Syrian Higher Education post-2011: Immediate and Future Challenges, published today, was commissioned by the Council for At-Risk Academics (Cara), a British charity that helps academics in danger or forced exile, and authored by Professor Colleen McLaughlin with Jo-Anne Dillabough, Olena Fimyar, Zeina Al-Azmeh and Mona Jebril of the Faculty of Education at Cambridge.

A second complementary study out today, The State of Higher Education in Syria pre-2011, also led by Professor McLaughlin and commissioned jointly by Cara and the British Council, provides an overview of the sector before the outbreak of war.

The conflict in Syria has generated the 21st century’s worst humanitarian crisis, with as many as 300,000 Syrians killed and half the population displaced since it began in 2011. Previously, Syria boasted one of the Middle East’s largest and most well-established higher education systems. Not only has the war decimated the university system within the country, but the refugees who have fled are estimated to include 2,000 university professionals and at least 100,000 university-qualified students.

The new report identifies three clear and damaging trends in the Syrian higher education system, many elements of which existed prior to 2011 but all exacerbated by the conflict. Most fundamental is the heightened politicisation of the sector through a variety of means, many involving violence. 'These include corrupt governance structures, the militarisation of students and university practices, and a much stronger security apparatus leading to the fragmentation and/or complete breakdown of HE,' the study says.

Human rights violations including detention, patronage, disappearances, displacement and murder are changing the demographic make-up of higher education, it adds, and have led to the social distrust of HE institutions as capable of educating students into the future and the targeting of academics as a particular threat.

One academic interviewed for the study said: “In 2012 I heard from my colleagues in our laboratory that there were soldiers who came to our university, broke down the doors, destroyed everything and hit everybody there because they had protested against the regime". Another recalled: “One of the professors was dragged away by two security officials in front of the students. That professor was taken to prison and charged because of his political views.”

The general atmosphere within universities was of pervasive fear, in which ‘anyone working at the university is stopped from communicating with anyone outside,’ a third interviewee reported.

Meanwhile, political realignment has become a major obstacle to broad forms of internationalisation and collaboration – the lifeblood of higher education. Regime-controlled universities have had to curtail their links with Western universities, the researchers found, while reinforcing collaboration with countries supportive of the regime, including Russia, Iran and China.

A second trend identified by researchers was the academic impact of the civil war, including curriculum stagnation and the disappearance of research. “The conflict has resulted in massive losses of both HE expertise and HE infrastructure,” says the study, with already-limited university funding diverted towards the conflict and public spending on higher education per head well below the OECD average.

Government control over the content and delivery of curricula has increased in areas controlled by President Bashar al-Assad’s regime, and there is more dependence on rote learning and outdated textbooks. Teaching quality has fallen as experienced qualified staff are lost and replaced by untrained recent graduates, and reports of bribery, cheating and false certification are rife, with corruption “threatening the integrity of HE”.

Research, already limited pre-2011, has “all but disappeared”, driven out by lack of funding and the near-impossibility of field research, the study says.

The third and final trend highlighted in the report is the impact of the conflict on students’ experiences. While access has increased as admission requirements have been lowered to counter lower applications post-2011, attrition rates have “soared” because of personal safety fears, poverty, fear of detention and internal displacement. Education quality has diminished as funding falls, with staff often unavailable and buildings unusable, coupled with disruption to water and power.

In a series of recommendations, the report calls for action from the United Nations, NGOs and the broader international community to depoliticise Syrian higher education and develop and implement “high standards of academic freedom and associated forms of accountability”. While it is important that university students and staff should be kept safe, national security personnel should be withdrawn from campuses and replaced with civilian security personnel trained in conflict reduction and peace-building approaches, the study says.

International partnerships with other Middle Eastern, Western and European universities should be developed. “Standards of transparency, autonomy, freedom and cultural and political pluralism … will be crucial to any post-conflict Syrian HE sector,” researchers conclude.

The report’s findings were drawn from existing academic research and “grey” literature such as news and NGO reports, together with 117 remote interviews with university staff and students still in Syria conducted by compatriot academics in exile, focus group discussions and personal testimonies from 19 Syrian academics living in exile in Turkey.

Professor McLaughlin said: “The key researchers here were the Syrian displaced academics CARA was working with. This collaborative research project was challenging to undertake given the context. The results are important, and so is this way of collaborating. CARA’s work to support Syrian displaced academics is vital and we need to remember and honour their work as well as continue to support research into the reality of Syrian higher education.”

Stephen Wordsworth, Executive Director of Cara, said: “Cara’s regionally-based Syria Programme provides opportunities for Syrian academics in exile to work collaboratively with their counterparts in UK universities and elsewhere, to maintain and develop their skills and experience in preparation for the day when they can return home to help re-build the system of higher education in that country.

“A separate Syria Programme Report examined the state of higher education in Syria before 2011; today’s new study shows very clearly the damage that has been inflicted since then, and what needs to be done to start to put things right again.  We are immensely grateful to all the Syrian academics who contributed, and to Colleen and her team for their inspirational leadership of the project.” 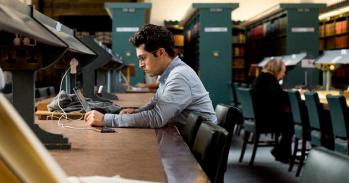 Thought experiment on post-COVID Cambridge suggests that for universities, blending is a new beginning