A super energy-efficient high-performance computer, with a performance equivalent to 4,000 desktop machines running at once, will enable researchers to handle the Big Data challenges of the future - not least the design of a system to support the world's largest telescope.

One of the world’s greenest supercomputers has been unveiled by the High Performance Computing Service at the University of Cambridge.

Named “Wilkes”, after the Cambridge pioneer Maurice Wilkes, who built one of the first ever programmable computers in 1949, the new system has been rated second in the “Green 500” – a ranking of the most efficient supercomputers worldwide. It is, however, the most efficient air-cooled supercomputer in the world today (the first-placed machine used an oil-cooled system instead), making it the greenest machine of its kind.

Designed and built by the in-house engineering team within the Cambridge High Performance Computing Service, Wilkes’ energy efficiency is 3,361 Mega-flops per watt. “Flops” (floating point operations per second) are a standard measure of computing performance.

Dr Paul Calleja, Director of the Cambridge High Performance Computing Service, said: “Energy-efficiency is the biggest single challenge in supercomputing today and our new system makes an important step forward in this regard.” 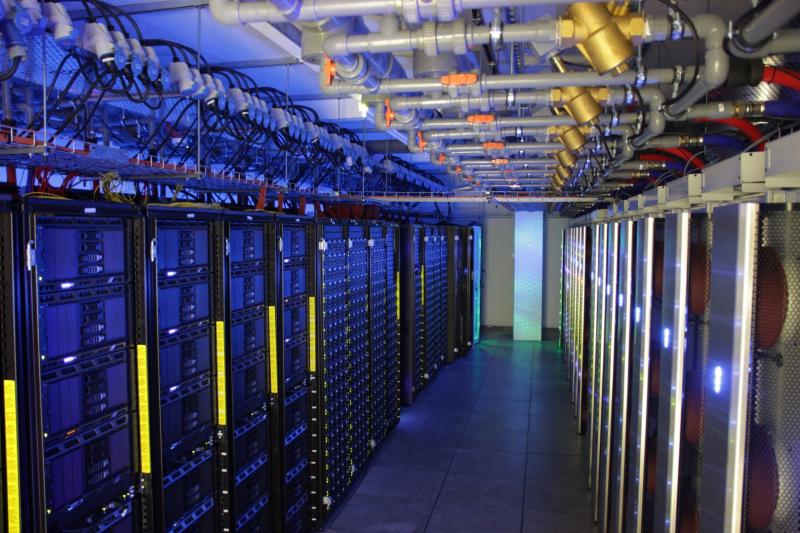 The Dell system uses innovative NVIDIA GPU computational hardware, and apart from its green credentials is also the fastest GPU supercomputer in the UK – with a sustained performance of 250 “Teraflops”. It reached position 166 in the Top 500 list of the world’s fastest supercomputers. This is equivalent to approximately 4,000 desktop machines all running as a single system.

One of the primary uses of Wilkes is as a test bed for the development of a computing platform for the Square Kilometre Array (SKA). This is a huge, international effort to build the world’s largest telescope. By detecting radio waves with unprecedented sensitivity and fidelity, the facility has the potential to answer some essential questions about the Universe, such as what the nature of dark energy is, and perhaps the most fundamental question of all – are we alone?

Cambridge is leading the design of the computational platform within the SKA, which is by far the world’s most ambitious IT project. “Wilkes” will play an integral role in this design process.

The architecture of the GPU system has also been designed to be the most scalable possible using the very latest high-performance Infiniband network from Mellanox. This provides a massive 100 gigabytes per-second bandwidth, and a message rate of over 137 million messages a second.

This scalability will be used to drive the discovery process across a broad range of research activities within the University. For example, the system will be used to design and test jet engines, design new drugs to fight cancer, and examine the fundamental nature of the nucleus of the atom.

The GPU system is housed in a custom-developed “green data centre”, which uses evaporative air-coolers and water heat-exchangers to further boost its environmental credentials. “Together, the cooling and processing systems behind Wilkes dramatically reduce the power consumption in the data centre, making the total facility one of the most energy-efficiency data centres in the world,” Calleja said. “Also, the new SKA development lab places the University at the forefront of large-scale, big-data platform development.”

Maurice Wilkes was the man behind EDSAC, the first programmable computer to come into general use. Built in 1946, it put Cambridge at the forefront of the digital revolution. More than six decades later, this latest supercomputer, bearing Wilkes’ name, is destined to write the next chapter in that ongoing story.

The computer was designed in partnership with Dell, NVIDIA and Mellanox, and was part-funded by the Science and Technology Facilities Council, Rolls-Royce, and Mitsubishi Heavy Industries. Further information about the Cambridge High Performance Computing Service can be found at: http://www.hpc.cam.ac.uk/

Dishes close-up. One of the supercomputer’s first roles will be as a test bed for the development of a computing platform for the Square Kilometre Array - an international effort to build the world’s largest telescope.