Sing for the win

A new app game developed by a Cambridge student challenges people to sing the right note at the right time in order to smash down a wall and advance to the next level - surreptitiously engaging them with basic music theory at the same time.

I hope this app will encourage people to not be so self-conscious and just make some noise.

A new game for the iPhone and iPad called SingSmash is taking an innovative approach to familiarising people with music theory - by sneaking it through the backdoor.

Gamers have to sing into their phone or tablet. By hitting the required note at the right moment, a chunk of translucent wall is briefly rendered impermeable - hopefully in time to bounce a constantly moving ball back at the opposite side, knocking out blocks to progress to increasingly complex levels.

Released today, the game - which is like a handheld mash-up of a brightly coloured ‘Pong’ and an exacting, stripped-down ‘Rock Band’ - was developed by MPhil student Charlie Williams from the Centre for Music and Science as a response to his experiences of teaching music.

Using the game format, the app gets people stretching their vocal chords to ricochet the ball back at opposing blocks - while stealthily introducing them to notation by telling them what they’ve just sung.

“I didn’t want to put theory up front and scare people by stating ‘Now try and sing a harmonic minor scale’ - which can sound pretty daunting,” says Williams. “But if you beat a level, then you find out ‘Guess what? You’ve just sung a harmonic minor scale!’ - people can start to gain confidence, recognise notes and even discover talents with voice and pitch they may have never realised they possess.”

Williams feels that the way a lot of music is taught to beginners can often miss the point: that the first and most important thing with music is to have a go. He hopes SingSmash will help people overcome self-consciousness and get them to do just that, singing an increasingly adventurous series of notes and even licks as they progress.

“In many music lessons, you learn the names for things first and then you learn how to do it - which seems completely backwards and can put people off. When I teach music I try to emphasise actually doing it first, and I wanted to build a game to encourage that and make it fun, while slipping in the educational aspect so that if people want to build on skills they develop through the game then they can,” says Williams.

SingSmash uses inbuilt algorithms and pitch detectors to match the incoming sound to the best fit note within a broad but specified spectrum. To help people stay within the right range, the background music and in-game sounds - such as the collision noise - subtly match the notes of each level.

There is also a cunning secret feature - known in the gaming industry as an ‘Easter egg’ - which gives you a helping hand if you sing in a certain way, although Williams is keen not to spoil the surprise.

The game starts at a basic level and is very kid-friendly, but employs increasingly complex musical motifs as players advance through the game - to the point where the beta-testers Williams used have yet to crack the hardest level with their voice alone.

“You can play SingSmash using an instrument too, and my most enthusiastic beta-testers said they could only beat the top level with guitar. To my knowledge, no-one has managed to beat it just by singing as yet, so that’s a challenge right there!”

The app was built by Williams - who has gone from classically trained musician to self-confessed “tech-head” - in collaboration with musician Emma Hooper and graphic artist Jeff Kulak. It will initially cost 69p to download, a decision the team was reluctant to take, but, as Williams points out, “we are desperate to spend more time making games, and that takes money”.

Potential future projects include creating multi-player versions of the game and adapting it to incorporate rhythmic exercises. One of the important aspects for Williams is that SingSmash promotes the making of music, not just emulating pre-existing music. “Most music games - such as ‘Rock Band’ - are imitative. They are really fun games but with SingSmash you are actually making music for yourself,” he says.

“A lot of people who are self-taught are adverse to music theory, it can seem elitist and put people off. I’m hoping that people who play guitar in a band or whatever can use this as a fun way to build up their skills and explore new musical patterns.

“You don’t have to sing nicely, you just have to sing on the pitch - I hope this app will encourage people to not be so self-conscious and just make some noise. The best thing about kids is they just go for it right away, people are so worried about doing something wrong - this app is almost like a trick that might get adults to forget they are actually singing!” 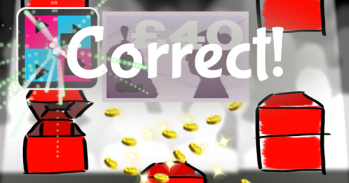