Percy Bysshe Shelley’s The Mask of Anarchy, the most celebrated literary response to the Peterloo massacre – which has its bicentenary on 16 August – drew on accounts of the tragedy written by the radical journalist and freethinker, Richard Carlile.

This changes how we read The Mask of Anarchy. It brings Shelley's poem much closer to Peterloo

This is the conclusion reached by Philip Connell, a senior lecturer in Cambridge’s English Faculty, who has identified new links between the two men and their writing. His findings, first published in the Times Literary Supplement (full study in Review of English Studies, 1 September 2019), shed new light on the meaning of a poem which has become a powerful inspiration for protest movements from the Chartists to the modern Labour Party.

Connell says: “Richard Carlile was not only an important eyewitness to the massacre, he also provided one of the most radical responses to appear in the English press, by arguing that the murderous actions of the Manchester authorities justified revolutionary violence. This changes how we read The Mask of Anarchy. It brings Shelley's poem much closer to Peterloo. It also explains why Shelley urged the working people of England to 'Rise like Lions', while arguing so passionately that protest must remain peaceful.”

Until now, it has been assumed that Shelley’s principal source of information about Peterloo was Leigh Hunt’s moderate, middle-class reformist newspaper, the Examiner. But Connell has found compelling evidence to suggest that Shelley also engaged with a far more uncompromising response to the massacre which took place on St Peter’s Field, Manchester, on 16 August 1819.

Connell’s research indicates that while Shelley was living in Italy in 1819, he received one or more issues of the radical periodicals, Sherwin’s Weekly Political Register and The Republican, both of which were edited by Richard Carlile in London. The most likely supplier of this material is Shelley’s friend Thomas Love Peacock. On 21 September, Shelley wrote to Peacock: ‘I have received all the papers you sent me, & the Examiners regularly … What an infernal business this of Manchester! What is to be done? Something assuredly.’

Connell identifies close links between the Shelley–Hunt circle and Carlile, as well as circumstantial evidence that Peacock was well-placed to lay his hands on Carlile’s controversial publications. The study also suggests that Carlile and Shelley had some contact in the period before and after Peterloo. In the Republican for 24 September, Carlile printed Shelley’s Declaration of Rights, a rare single-sheet fly bill originally produced in Ireland in 1812. This is likely to have happened following some form of communication, probably involving other members of the Hunt circle in England.

The Peterloo Massacre by Richard Carlile (1819). Image: The British Library (public domain). 1 of 2

Connell argues that there are significant echoes of Carlile’s writings in the Mask of Anarchy which are at least as compelling as Shelley’s debts to Hunt’s Examiner. Most striking perhaps is the similarity between Carlile’s vision of the Home Secretary’s mask concealing ruthless bloodlust (‘you […] have thrown off your mask and set the first example of shedding blood’) and Shelley’s sinister personification: ‘I met Murder on the way – / He had a mask like Castlereagh’. Viscount Castlereagh was Leader of the House of Commons at the time and supported his Government’s repressive actions which led to cavalry charging into a crowd demanding parliamentary reform, leaving 18 people dead and 700 injured.

“Several instances of shared imagery and language suggest that Shelley drew on Carlile’s prose in his visionary reimagining of the massacre”, says Connell. “Immediately after describing Murder having ‘a mask like Castlereagh’, Shelley wrote that ‘Seven bloodhounds followed him’. This echoes Carlile’s language in articles which I believe Shelley read. Carlile published several descriptions of the Manchester Yeomanry as bloodhounds and Castlereagh and his fellow government ministers as ‘those men who could direct their bloodhounds to attack and destroy a peaceable meeting’.”

Another telling similarity, Connell argues, lies in the emphasis that both Carlile and Shelley place on women. The Times newspaper condemned the ‘female Reformers’ present at the start of the meeting on St Peter’s Field as delusional and this account found its way into Hunt’s Examiner. By contrast, Carlile praised these women. In particular, he honoured Mary Fildes, the ensign of the Manchester Reform Society, who appears prominently in his commemorative print, standing on the platform holding a flag (image attached).

In a similar vein, Shelley’s Mask gives a central role to an allegorical female figure in arresting the progress of Anarchy. He wrote of ‘a Maniac Maid, / And her name was Hope, she said: But she looked more like Despair’. She later ‘lay down in the street, / Right before the horses’ feet’, only to be saved from ‘Murder, Fraud and Anarchy’ by a quasi-divine intervention.

Despite these convergences, Shelley and Carlile took very different positions on the question of violence. Connell says: “Carlile vigorously defended violence as a legitimate response to the massacre yet while Shelley urges the ‘Men of England’ to ‘Rise like Lions’ he also betrays a deep anxiety about the possible consequences of working-class revolution. Shelley’s exposure to Carlile’s outraged militancy helps to explain his insistence on peaceful resistance.” 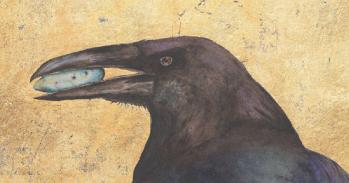 The Peterloo Massacre by Richard Carlile (1819).