A University of Cambridge graduate who taught himself graphic design has won this year's Face of the Festival competition to design the Festival of Ideas programme cover.

“The theme really caught my imagination. It opened up a lot of possibilities. I studied surrealism as part of my History of Art degree and I found the surrealists' interest in the subconscious dream world fascinating.”&#13; &#13;

A self-taught graphic designer has won a competition to come up with a cover for this year's Festival of Ideas programme based on the theme of Dreams and Nightmares.

Programmes are available across Cambridge and online from this week and are packed full of over 170 events, most of them free.

Its cover is designed by George Shapter, a 21-year-old History of Art graduate. He and a fellow Cambridge graduate have set up a design company called Qip Creative.

His winning design depicts a sleeping woman surrounded by origami boats and birds with a huge origami spider crawling towards her..

It was one of 22 entries in the annual Face of the Festival competition.

The Festival, which runs from 24 October to 4 November, aims to celebrate the rich contribution the Arts, Humanities and Social Sciences make to our culture and understanding of the world and to showcase the huge breadth of work being done by University of Cambridge academics.

Highlights this year include speakers such as the legendary BBC World Affairs Editor John Simpson, China expert Martin Jacques, poet Benjamin Zephaniah and children's author Lauren Child, debates on everything from gender and neuroscience to the US elections and hands-on activities for children, ranging from junk puppetry and circus workshops to Halloween ghost stories at the Scott Polar Museum.

George says he got the idea of his design after reflecting on how he could represent how easily a pleasant dream can turn into a nightmare. He focused on the idea of metamorphosis and decided origami could best represent this.

"I visualised how boats and birds could easily change and unfold into a horrible spider,” he says. “The theme this year really caught my imagination. It opened up a lot of possibilities. I studied surrealism as part of my History of Art degree and I found the surrealists' interest in the subconscious dream world fascinating.”

George taught himself graphic design from the age of around 12 when he started tinkering about on his computer, producing posters and designs.

His graphic design company does everything from website design and apps to posters and leaflets. George, who wants to be an artist, says he does not see much distinction between art and design. He has kept up his painting and drawing on the side and hopes to develop this alongside his design work.

Booking for the Festival opens on 12 September. See www.cam.ac.uk/festivalofideas for more information. 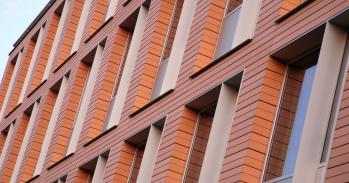