A research collaboration between the University of Cambridge, Queen Mary University of London and the Institute for High Pressure Physics in Troitsk has discovered the fastest possible speed of sound.

The result - about 36km per second - is around twice as fast as the speed of sound in diamond, the hardest known material in the world.

Waves, such as sound or light waves, are disturbances that move energy from one place to another. Sound waves can travel through different mediums, such as air or water, and move at different speeds depending on what they’re travelling through. For example, they move through solids much faster than they would through liquids or gases, which is why you’re able to hear an approaching train much faster if you listen to the sound propagating in the rail track rather than through the air.

Einstein’s theory of special relativity sets the absolute speed limit at which a wave can travel which is the speed of light and is equal to about 300,000km per second. However, until now it was not known whether sound waves also have an upper speed limit when travelling through solids or liquids.

The study, published in the journal Science Advances, shows that predicting the upper limit of the speed of sound is dependent on two dimensionless fundamental constants: the fine structure constant and the proton-to-electron mass ratio.

These two numbers are already known to play an important role in understanding our Universe. Their finely-tuned values govern nuclear reactions such as proton decay and nuclear synthesis in stars and the balance between the two numbers provides a narrow ‘habitable zone’ where stars and planets can form and life-supporting molecular structures can emerge. However, the new findings suggest that these two fundamental constants can also influence other scientific fields, such as materials science and condensed matter physics, by setting limits to specific material properties such as the speed of sound.

The scientists tested their theoretical prediction on a wide range of materials and addressed one specific prediction of their theory that the speed of sound should decrease with the mass of the atom. This prediction implies that the sound is the fastest in solid atomic hydrogen. However, hydrogen is an atomic solid at very high pressure above 1 million atmospheres only, pressure comparable to those in the core of gas giants like Jupiter. At those pressures, hydrogen becomes a fascinating metallic solid conducting electricity just like copper and is predicted to be a room-temperature superconductor. Therefore, researchers performed state-of-the-art quantum mechanical calculations to test this prediction and found that the speed of sound in solid atomic hydrogen is close to the theoretical fundamental limit.

Professor Chris Pickard, from Cambridge's Department of Materials Science and Metallurgy, said: “Soundwaves in solids are already hugely important across many scientific fields. For example, seismologists use sound waves initiated by earthquakes deep in the Earth's interior to understand the nature of seismic events and the properties of Earth's composition. They’re also of interest to materials scientists because sound waves are related to important elastic properties including the ability to resist stress.”

Professor Kostya Trachenko, Professor of Physics at Queen Mary, said: “We believe the findings of this study could have further scientific applications by helping us to find and understand limits of different properties such as viscosity and thermal conductivity relevant for high-temperature superconductivity, quark-gluon plasma and even black hole physics.”

Adapted from a Queen Mary University of London press release. 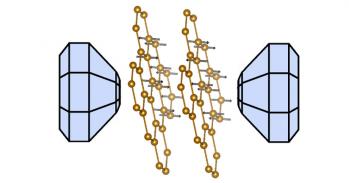