Rapunzel, Leonardo and the physics of the ponytail

New research provides the first mathematical understanding of the shape of a ponytail and could have implications for the textile industry, computer animation and personal care products.

Our findings solve a problem that has puzzled scientists and artists ever since Leonardo da Vinci remarked on the fluid-like streamlines of hair in his notebooks 500 years ago.

From Leonardo da Vinci to the Brothers Grimm, the properties of hair have been of enduring interest in science and art. Now, a University of Cambridge physicist and collaborators have quantified the curliness of human hair and developed a mathematical theory that explains the shape of a ponytail.

Research published today (13 February) in Physical Review Letters provides the first quantitative understanding of the distribution of hairs in a ponytail. To derive the Ponytail Shape Equation, the scientists took account of the stiffness of the hairs, the effects of gravity and the presence of the random curliness or waviness that is ubiquitous in human hair. Together with a new quantity described in the article – the Rapunzel Number –  the equation can, they say, be used to predict the shape of any ponytail.

The research by Professor Raymond Goldstein from the University of Cambridge, Professor Robin Ball from the University of Warwick, and colleagues, provides new understanding of how a bundle is swelled by the outward pressure which arises from collisions between the component hairs. This has important implications for understanding the structure of many materials made up of random fibres, such as wool and fur. The research will also have resonance with the computer graphics and animation industry, where the representation of hair has been a challenging problem.

“It’s a remarkably simple equation,” explained Goldstein, who is the Schlumberger Professor of Complex Physical Systems at Cambridge's Department of Applied Mathematics and Theoretical Physics. “Our findings extend some central paradigms in statistical physics and show how they can be used to solve a problem that has puzzled scientists and artists ever since Leonardo da Vinci remarked on the fluid-like streamlines of hair in his notebooks 500 years ago. 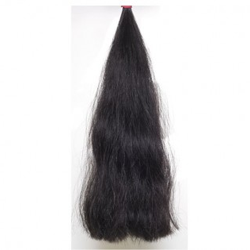 “To be able to reduce this problem to a very simple mathematical form which speaks immediately to the way in which the random curliness of hair swells a ponytail is deeply satisfying. Physicists aim to find simplicity out of complexity, and this is a case in point.”

“We imagine that at least half of the population has direct experience with the properties of ponytails, and we all have likely wondered about the fluffiness of hair,” added Goldstein, whose research was partially funded by the Schlumberger Chair Fund. “We now have the first quantitative description of this phenomenon and how it competes with gravity.”

Professor Goldstein will be presenting the research at the March Meeting of the American Physical Society in Boston on 28 February 2012.