Mothers who ‘connect’ with their baby during pregnancy are more likely to interact in a more positive way with their infant after it is born, according to a study carried out at the University of Cambridge. Interaction is important for helping infants learn and develop.

Although we found a relationship between a mother’s attitude towards her baby during pregnancy and her later interactions, this link was only modest. This suggests it is likely to be a part of the jigsaw, rather than the whole story

Researchers at the Centre for Family Research carried out a meta-analysis, reviewing all published studies in the field, in an attempt to demonstrate conclusively whether there was a link with the way parents think about their child during pregnancy and their behaviour towards them postnatally.

The results of their work, which draws data from 14 studies involving 1,862 mothers and fathers, are published in the journal Developmental Review.

Once the child had been born, researchers in these studies would observe the interactions between parent and child. One measure they were looking for was ‘sensitivity’ – the ability to notice, interpret and respond in a  timely and appropriate manner to children’s signals, for example if the baby was upset.

Combining the results from all 14 studies, the Cambridge team showed a modest association between positive thoughts and feelings about the infant during pregnancy and later interaction with the infant, but only in mothers.

“Studies have shown that parent-child interaction is crucial for a child’s development and learning, so we wanted to understand if there were prenatal signs that might predict a parent’s behaviour,” says Dr Sarah Foley, the study’s first author, who carried out the research as part of her PhD.

“Although we found a relationship between a mother’s attitude towards her baby during pregnancy and her later interactions, this link was only modest. This suggests it is likely to be a part of the jigsaw, rather than the whole story.”

Research has also shown that increased awareness of the baby during pregnancy is associated with healthy behaviours during pregnancy, such as giving up smoking or attending antenatal appointments.

“This is a relatively new area of research, but could have important implications for children’s development,” adds Dr Foley. “We need more research in this area, but hope it will inform new interventions that could help new mothers engage more with their children.”

Dr Foley says there may be a number of factors that contribute to low levels of attachment with the baby during pregnancy. These include: previous experience of miscarriage, depression or anxiety, a mother’s relationship with her own parents, or cultures in which focusing on the baby is considered inappropriate. However, she says, the paucity of evidence means it is difficult to determine which of these factors would impact on prenatal thoughts about the infant, which might in turn influence the quality of later interaction with the infant.

The study was funded by the Economic and Social Research Council. 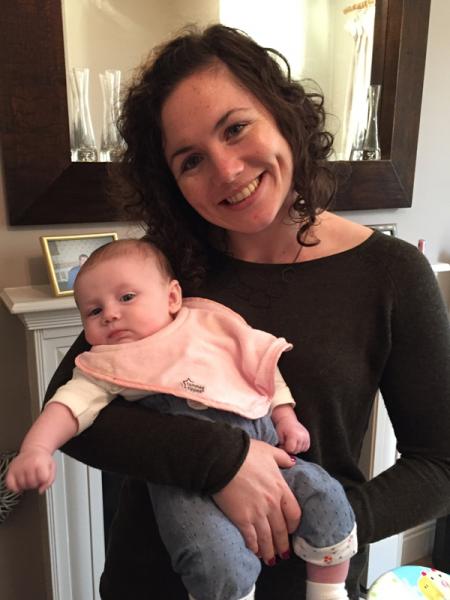 “Working with children throws up lots of unexpected and fun moments,” says Dr Sarah Foley. “One day you’re being splashed while standing on a toilet-seat filming bath-times, the next you’re catching YouTube-worthy vomiting action shots and being used as a climbing frame by one child to ensure you can film another!”

Sarah has just completed an ESRC-funded PhD at the Centre for Family Research, working with Professor Claire Hughes. She has spent several years at Cambridge now, having completed her undergraduate degree in Social and Political Sciences at St Catharine’s College. The Centre, she says, “is an incredibly stimulating academic environment with immense support and lively discussions over cake on a Friday morning!”

Her doctoral research looked at expectant mothers’ and fathers’ thoughts and feelings in the last trimester of pregnancy as predictors of their adjustment to parenthood and subsequent parenting over the first two years of life. “Despite an increase in fathers’ involvement in childcare, the majority of research remains focused on mothers,” she says.

Her current research involves, in part, looking at parents’ expectations of their roles and division of childcare, and the consequences when these expectations are not met. This is timely in light of recent changes to parental leave in the UK and societal shifts in notions of the involved father, she says.

Sarah’s research is part of the ESRC-funded New Fathers and Mothers Study, a longitudinal study of 200 first time parents from Cambridge, and 200 from the Netherlands and New York.

“The children in the study are turning three this year and we’re busy seeing how they are getting on at nursery,” she explains. “This typically involves me getting down on the floor and testing the children’s social understanding and thinking skills through a variety of fun tasks.”

She hopes that her research will lead to changes in antenatal education and early parent support that promote discussion of parents’ thoughts and feelings about parenthood and their future infant. In November 2017, as part of the ESRC Festival of Social Science, she ran a free ante-natal class for new parents that discussed the realities of parenthood, the importance of self-care and simple parenting tips rather than simply focusing on birth plans.

“The journey through parenthood is filled with joy, but also elements of confusion, and sometimes pain. Crucially, parents should not feel alone and I hope that through greater dissemination of my research findings, through classes or perhaps a book or an app, we can support new parents and encourage more ‘honest conversations’ about parenthood.”