The aspiration is to create a new way to build research capacity where needed – a new way for the University to interact globally.

For over 25 years, Professor David Dunne from the Department of Pathology has collaborated with African scientists working on parasitic diseases in their region – infections such as those caused by the schistosome worm, which can live for up to 40 years in the human body.

On his many trips to East Africa, he has seen at close quarters the importance of equipping its researchers with the practical and fundamental knowledge they need to be centrally involved in health research endeavours in Africa: ‘Even in the best African Universities, shortages of PhD-level staff and internationally competitive research groups denies young research scientists sufficient mentorship and advanced training, causing a serious block to African scientific progress,’ he explains. ‘Africa has 11% of the world’s population and a disproportional amount of the world’s diseases but accounts for just 0.3% of the world’s research output.’

Now, an initiative has commenced to help African researchers participate more effectively in the march of science. The Africa-led programme ‘Training Health Researchers into Vocational Excellence in East Africa’ (THRiVE) is harnessing research expertise in Cambridge, under the directorship of Professor Dunne, and the London School of Hygiene and Tropical Medicine (LSHTM) to generate a critical mass of future research leaders in seven Universities and research institutes on the African continent.

Funded with £5.2 million from the Wellcome Trust through its £30 million African Institutions Initiative, and directed by Professor Nelson Sewankambo at Uganda’s Makerere University, the programme’s aim is to create a self-sustaining research infrastructure in Africa.

A core component of the programme is to match the scientific interests of African scientists to relevant experts in Cambridge and the LSHTM. The UK researchers provide scientific mentorship and co-supervision plus access to individually tailored research training in the UK. THRiVE also provides the opportunity for UK researchers to travel to Africa, to interact with the students and their African supervisors in their home institutions.

Only months after commencing, more than 80 Cambridge academics (including researchers from the Wellcome Trust Sanger Institute) have already come forward to offer their research experience in areas ranging from clinical medicine, biological sciences and veterinary medicine, to social sciences, mathematics and engineering.

‘It has been astonishing,’ says Professor Dunne. ‘I found myself pushing against an open door. I’m delighted about the breadth of expertise we are offering and the willingness of people to get involved.’ It’s now the job of Programme Coordinator Dr Pauline Essah to match successful applicants from the seven African Institutions to the health-related expert at Cambridge who can best support their research area.

A pilot scheme that preceded THRiVE is already showing the benefits of the principle of combining mentorship and training to stimulate and support researchers at the highest level. Launched in 2008, the Makerere University – Uganda Virus Research Institute Training Programme for Infection and Immunity currently supports two postdoctoral fellows, four PhD students (including Dr Annettee Nakimuli, see below) and 20 MSc projects in Uganda. The partnership brings together these two African institutions with the University of Cambridge and the LSHTM, and is funded by £1 million from the Wellcome Trust.

It’s not only the scientists in Africa who will benefit, as Professor Dunne explains: ‘Developing networked collaborations with African scientists will be of huge benefit to us too. Working in Africa provides a fantastic opportunity to conduct research under conditions that are only found in disease-endemic countries and is sure to provide a new impetus for research.’

‘I fully anticipate that we will see African science leapfrogging us in areas where domestic challenges have forced economies and efficiencies that we can learn from. As an example, one has only to look at the way Africa has taken up the mobile phone in recent years – completely outpacing us in how they use the technology.’

And, by gathering together experts as part of the THRiVE Programme, a horizontal network of research scientists has developed, all linked by their common interests in Africa. A number already have their own collaborative activities with Africa, such as Professor James Wood in the Department of Veterinary Medicine.

Professor Wood’s work with the University of Ghana on the dynamics of viral infections in bats has recently been awarded a Medical Research Council Emerging Infection Catalyst Award to develop his links with Africa and UK-based partner institutions. Using the THRiVE model, Professor Wood (with support from THRiVE in Cambridge) is also making arrangements for PhD students from the University of Ghana to visit Cambridge for training purposes, using funds provided by the Carnegie Foundation.

THRiVE will support five postdoctoral fellows and 14 PhD students from seven African institutions, some in post-conflict areas of Africa. Crucially, however, the Programme has been modelled with a view to scalability. ‘In some ways, we’ve over-engineered the Cambridge organisation because we wanted to create a structure that can easily be built on,’ explains Professor Dunne. ‘The goal is to be capable of expanding the model into teaching, extending it elsewhere in Africa, and covering fields outside of health research. Essentially, the aspiration is to create a new way to build research capacity where needed – a new way for the University to interact globally.’

One African scientist to benefit from the pilot scheme on which THRiVE has been built is Dr Annettee Nakimuli. Working as an obstetrician at Uganda’s Mulago Hospital and lecturer at Makerere University, Dr Nakimuli’s primary research interest is pre-eclampsia, a life-threatening condition that can develop suddenly during pregnancy. In the UK, about two in 100 births are affected by pre-eclampsia. But, in Africa, this escalates to about one in 10, affecting many of the patients Dr Nakimuli sees at Mulago Hospital. Now mid-way through her PhD Fellowship, Dr Nakimuli is supervised by scientists at the University of Makerere and the Uganda Virus Research Institute. Through the scheme, she is also co-mentored by Cambridge’s Professor Ashley Moffett, whose pioneering research at the Centre for Trophoblast Research is uncovering how an immunological imbalance at the placental interface can underlie pre-eclampsia. Ashley’s immunological understanding has helped me enormously, and on visits to Cambridge I’ve learnt the practical techniques I need to extract and genotype DNA from blood and cord samples from affected patients,’ explains Dr Nakimuli, who has already recruited 150 mother–baby pairs to a case-control study to investigate the causes of pre-eclampsia. One area she is focusing on is how genes normally thought to be important in immune responses to infections also contribute to how successfully the placenta implants to establish the maternal blood supply to the baby. For Professor Moffett, the experience has been just as positive: ‘It’s been an enlightening experience to be able to work here and in Africa with impressive medical scientists like Annettee who see at first-hand the severity of the pre-eclampsia problem in Africa. The resource Annettee is building will provide the first collection of genetic information on African cases of pre-eclampsia. The links we now have together will go forward into the future, as Annettee builds her own research programme. 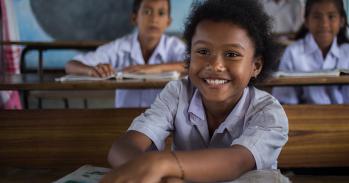