Partners in the European Commission’s Graphene Flagship, including the University of Cambridge, launched a rocket this week to test graphene – a two-dimensional form of carbon – for potential applications in space.

This rocket launch is the next step towards our major milestone: bringing graphene to the International Space Station

The experiment aims to test the possibilities of printing graphene inks in space. Graphene inks can be used in the production of batteries, supercapacitors, printed electronics, and more. If researchers are able to demonstrate how these inks work in space, astronauts could potentially print their own devices on the go, or they can repair electronics with graphene ink printers.

The experiments conducted this week were a collaboration led by the University of Brussels, with Cambridge, Pisa, and ESA. The inks that were tested in the experiments were produced by the research group of Professor Andrea Ferrari, Director of the Cambridge Graphene Centre.

Studying the different self-assembly modes of graphene into functional patterns in zero gravity will enable the fabrication of graphene electronic devices during long-term space missions, as well as help understand fundamental properties of graphene printing on Earth.

Cambridge researchers pioneered the use of liquid phase exfoliation, one of the most common means of producing graphene, to prepare inks from graphene and related materials. Such inks are now used to print devices ranging from flexible electronic sensors and gauges to batteries and supercapacitors.

The experiments will allow researchers to better understand the fundamentals of the printing process on Earth, by removing the presence of gravity and studying how graphene flakes self-assemble.

These experiments are a first step towards making graphene printing available for long term space exploration, since astronauts may need to print electronic devices on demand during long-term missions. Graphene-based composites may also be used to offer radiation protection, a compulsory requirement for human spaceflight, for example during Mars-bound missions.

During its short flight, the MASER rocket experiences microgravity for six minutes, during which time the researchers carry out the tests of graphene’s properties. When the rocket returns to Earth, the samples are retrieved and analyses are carried out. The rocket tests are an extension of a zero-gravity parabolic flight in May 2018, where experiments were conducted during just 24 seconds of microgravity.

“There is no better way to validate graphene’s potential than to send it to the environment it will be used in,” said Carlo lorio, leader of the space activities carried out by the Graphene Flagship, and a researcher at Graphene Flagship partner Université Libre de Bruxelles. “Graphene has unique conductivity properties that scientists are continuing to take advantage of in new processes, devices and in this case, coatings. Experiments like these are fundamental to graphene’s success and integral for building the material’s reputation as the leading material for space applications.”

“The Graphene Flagship has pioneered the exploration of graphene for space applications since 2017,” said Ferrari, who is also Science and Technology Officer of the Graphene Flagship and Chair of its Management Panel. “With three microgravity campaigns in parabolic flights already concluded and a fourth one on the way, this rocket launch is the next step towards our major milestone: bringing graphene to the International Space Station. Space is the limit for graphene. Or, is it?" 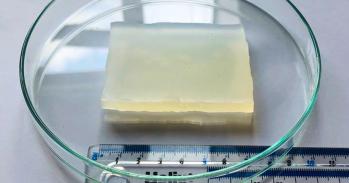 ‘Super jelly’ can survive being run over by a car

The MASER14 rocket taking off from Esrange, Sweden