Surgical implants are widely used in modern medicine but their effectiveness is often compromised by how our bodies react to them. Now, scientists at the University of Cambridge have discovered that implant stiffness is a major cause of this so-called foreign body reaction.

This is the first time that stiffness of implant materials has been shown to be involved in foreign body reactions. The findings – published in the journal Biomaterials – could lead to major improvements in surgical implants and the quality of life of patients whose lives depend on them.

Foreign bodies often trigger a process that begins with inflammation and ends with the foreign body being encapsulated with scar tissue. When this happens after an accident or injury, the process is usually vital to healing, but when the same occurs around, for example, electrodes implanted in the brain to alleviate tremor in Parkinson’s disease, it may be problematic.

Despite decades of research, the process remains poorly understood as neither the materials from which these implants are made, nor their electrical properties, can explain what triggers inflammation.

Instead of looking for classical biological causes, a group of Cambridge physicists, engineers, chemists, clinical scientists and biologists decided to take a different tack and examine the impact of an implant’s stiffness on the inflammatory process.

According to Dr Kristian Franze, one of the authors of the study: “Electrodes that are implanted in the brain, for example, should be chemically inert, and these foreign body reactions occur whether or not these electrodes are switched on, so it’s not the electrical signalling.

“We thought that an obvious difference between electrodes and brain tissue is stiffness. Brain tissue is as soft as cream cheese, it is one of the softest tissues in the body, and electrodes are orders of magnitude stiffer.” 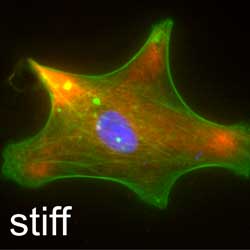 To test their hypothesis that mechanical signals trigger inflammation, the team cultured brain cells on two different substrates. The substrates were chemically identical but one was as soft as brain tissue and the other two orders of magnitude stiffer, akin to the stiffness of muscle tissue.

When they examined the cells, they found major differences in their shape. “The cells grown on the stiffer substrate were very flat, whereas those grown on the soft substrate looked much more like cells you find in the brain,” he explained.

To confirm the findings they did genetic and other tests, which revealed that many of the inflammatory genes and proteins known to be involved in foreign body reactions had been upregulated on stiff surfaces.

The team then implanted a tiny foreign body into rats’ brains. The implant was made of a single material but one side was as soft as brain tissue and the other as stiff as muscle. They found much greater foreign body reaction around the stiff part of the implant. 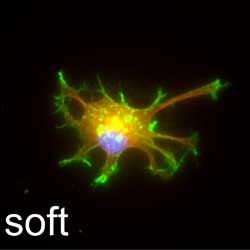 “This strongly indicates that stiffness of a material may trigger foreign body reactions. It does not mean there aren’t other triggers, but stiffness definitely contributes and this is something new that hasn’t been known before,” he said.

The findings could have major implications for the design of implants used in the brain and other parts of the body.

“While it may eventually be possible to make implants out of new, much softer materials, our results suggest that in the short term, simply coating existing implants with materials that match the stiffness of the tissue they are being implanted into will help reduce foreign body reactions,” said Dr Franze.

Mothers can influence offspring’s height, lifespan and disease risk in unexpected ways – through their mitochondria