Even low doses of toxic chemicals in the environment pose a significant risk to cardiovascular health, according to a report in today’s edition of The BMJ, led by researchers at the University of Cambridge. The researchers have also challenged the omission of environmental risk factors such as toxic metal contaminants in water and foods from the recent World Health Organization report on non-communicable diseases (NCDs).

It’s clear from our analysis that there’s a possible link between exposure to heavy metals or metalloids and risk of conditions such as heart disease, even at low doses – and the greater the exposure, the greater the risk

In recent decades, exposures to environmental toxic metals such as arsenic, copper, lead, cadmium and mercury, have become a global public health concern. Although often naturally occurring, these contaminants have made their way into water supplies and, via irrigation, into the food chain. For example, in Bangladesh, deep wells were introduced in the Ganges Delta to draw water clear of bacterial and viral pathogens, but this inadvertently led to exposure to toxic metals.

Concern has often focused on the toxicity or carcinogenic properties of the metals, particularly at high doses. However, there is increasing evidence to suggest that heavy metals may have other adverse effects on health – including cardiovascular disease such as heart disease and stroke – even at lower levels of exposure, which might be prevalent in many parts of the world, including the UK and the US.

To interpret the available evidence, a team led by researchers at Cambridge’s Department of Public Health and Primary Care carried out a systematic review and meta-analysis of published studies covering 350,000 unique participants from 37 countries.

The results of the study showed that exposure to arsenic, lead, cadmium and copper – but not mercury – was associated with an increased risk of coronary heart disease and cardiovascular disease.

“It’s clear from our analysis that there’s a possible link between exposure to heavy metals or metalloids and risk of conditions such as heart disease, even at low doses – and the greater the exposure, the greater the risk,” says Dr Rajiv Chowdhury, the study’s first author. “While people shouldn’t be overly worried about any immediate health risk, it should send a message to policymakers that we need to take action to reduce people’s exposure.”

Worldwide, those at greatest exposure of arsenic, lead, cadmium and copper were around 30% to 80% more likely to develop cardiovascular disease than those at lowest exposure.

The report is important, say the researchers, because it highlights the need to tackle this environmental and public health problem, one which disproportionately affects people in low and middle income countries, though may still affect those in higher income countries. Interventions need not be costly, they stress; for example, cheap, scalable technologies (e.g. environmentally-friendly water filters) or behavioural interventions (e.g. rinsing practices of rice and vegetables prior to cooking) are currently being tested to reduce exposures at the household level.

Additionally, in a letter published at the end of June, Dr Chowdhury and colleagues expressed their disappointment that the earlier WHO report by the Independent High-Level Commission on non-communicable diseases published in June did not include exposure to heavy metals as a key contributing factor. Writing in the Lancet, the authors said: “Unfortunately, this globally important report had a major omission: recognising the detrimental role of environmental risk factors, beyond the conventional behavioural factors (tobacco and alcohol use, physical inactivity, and unhealthy diet), in enhancing global NCD burden and health inequality.” 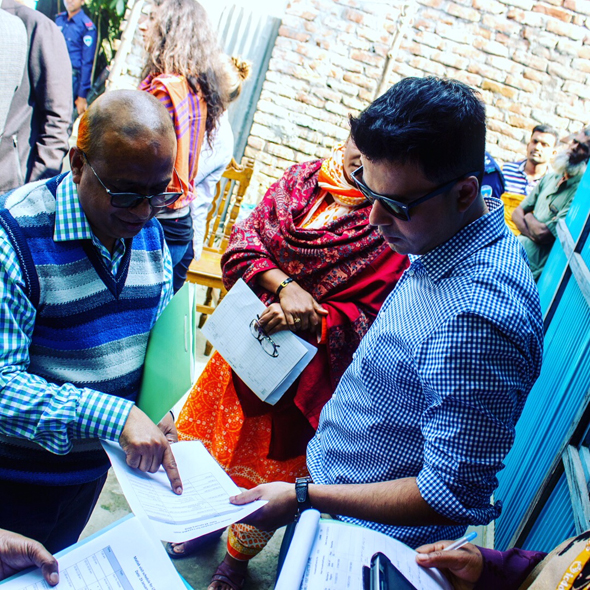 2006 was a year of “life-changing events” for Dr Rajiv Chowdhury: not only did he receive a Commonwealth scholarship to study for a masters at Cambridge, but his wife also gave birth to their baby daughter.

Rajiv grew up in Bangladesh, where he studied medicine before moving to Cambridge for his masters. This made him acutely aware of the challenges facing low-income countries. “I could see for myself the massive inequalities, the huge burden of disease, the poor infrastructure, lack of resources…” he says. But it was his encounter with non-communicable diseases (NCDs) – conditions such as heart disease, cancer and type 2 diseases – that was to have particular relevance to his current work.

Following his masters, Rajiv went on to receive a Gates Cambridge scholarship to support his PhD in epidemiology – the first Gates Cambridge scholar from Bangladesh. He now studies the role played by both environmental factors (such as toxic metals, diet, etc.) and genetic factors in influencing the risk of chronic NCDs.

Rajiv’s particular interest involves working closely with researchers in low-income countries such as Bangladesh, Sri Lanka and Malaysia – as well as being the principal investigator on several international research projects, he is also Scientific Director for CAPABLE (Cambridge Programme to Assist Bangladesh in Lifestyle and Environmental risk reduction), funded through the Global Challenges Research Fund.

“I hope that our work will lead to the establishment of the largest NCD scientific cohort study in Bangladesh,” he says. “We’re aiming for it to recruit over 150,000 participants. This should help us generate some effective solutions to reduce the impact of environmental risk factors which affect many hundreds of millions of people worldwide.”

Rajiv says he has learned a lot from both his mentors and peers during his time at Cambridge. “Cambridge offers one of the most intellectually stimulating environments in the world for scientific endeavours,” he says. “I have come across some of the brightest minds in biomedical science here who have changed my life and the way I perceive research.”

Filter bed beside Afon Rheidol Water draining from an adjacent disused silver-lead mine is passed through these filter beds so as to allow the toxic heavy metals to settle out, thereby reducing pollution of the river.