Study illustrates “high conservation potential” of vaccines for endangered wild primates devastated by viral disease, but highlights need for access to captive chimpanzees so vaccines can be trialled before being administered in the wild.

If biomedical laboratories ‘liquidate’ their chimpanzee populations, there will be nowhere left to do conservation-related trials

The first conservation-specific vaccine trial on captive chimpanzees has proved a vaccine against Ebola virus is both safe and capable of producing a robust immune response in chimpanzees.

This unprecedented study, published in the journal PNAS, shows that ‘orphan’ vaccines - which never complete the expensive licensing process for human use - can be co-opted for use on wildlife and might be a godsend for highly endangered species such as gorillas and chimpanzees, say researchers.

They suggest that, by ending captive research in an effort to pay back an “ethical debt” to captive chimpanzees, the US Government is poised to “renege on an even larger debt to wild chimpanzees” at risk from viruses transmitted by tourists and researchers – as safety testing on captive chimpanzees is required before vaccines can be used in the wild.

“The ape conservation community has long been non-interventionist, taking a ‘Garden of Eden’ approach to modern medicine for wild animals, but we ended Eden by destroying habitats and spreading disease,” said Dr Peter Walsh, the senior author on the study from the Division of Biological Anthropology, University of Cambridge, who conducted the trial at the New Iberia Research Centre in the US with researchers from the Centre, as well as the US Army, the University of Louisiana and the conservation charity Apes Incorporated (ApesInc.org).

“Half of deaths among chimps and gorillas that live in proximity to humans are from our respiratory viruses. For us it’s a sore throat - for them it’s death.”

“We need to be pragmatic about saving these animals now before they are wiped out forever, and vaccination could be a turning point. But park managers are adamant - and rightly so at this stage - that all vaccines are tested on captive apes before deployment in the wild. This means access to captive chimpanzees for vaccine trials.”

Infectious diseases pose extinction-level threats to African ape species on a par with poaching and habitat loss, say researchers, with populations continuing to be devastated by malaria, anthrax and “spillover” respiratory viruses - as well as massive Ebola outbreaks which had killed roughly one third of the world gorilla population by 2007.

They believe ‘orphan’ vaccines could be critical weapons in the fight for wild ape survival. But the ability to test new vaccines relies on research access to captive chimpanzees, and the study’s authors argue that it is vital to retain captive chimpanzees for vaccine trials, not for human use, but to help save key species of wild apes from extinction. 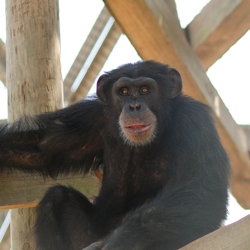 The US Fish and Wildlife Service is now considering regulations that would end all biomedical testing on captive chimpanzees over the next few years - the US being the only developed country to allow such research. The study’s authors believe that the US should establish a “humanely housed” captive chimpanzee population dedicated solely to conservation research.

The researchers administered captive chimpanzees with a new ‘virus-like particle’ (VLP) vaccine being developed by the biotech company Integrated Biotherapeutics for use on humans. While they did not challenge the vaccinated animals directly with Ebola, researchers tested whether antibodies harvested from the chimpanzees could protect mice against the deadly virus. They also monitored the chimpanzees in case the vaccine produced health complications.

Results showed that the vaccine is safe in chimpanzees. The vaccinated chimpanzees developed ‘robust immune responses’, with virus-specific antibodies detected as early as 2 to 4 weeks after the first vaccination in some animals and within 2 weeks of the second vaccination in all animals.

The authors note that these VLP vaccines currently require multiple administrations to reach “full potency”, but could prove the difference between survival and extinction for species that are highly endangered or immunologically fragile but also easy to vaccinate.

“There is a large pool of experimental vaccines that show excellent safety and immunity profiles in primate trails but are never licensed for human use,” said Walsh.

“Although Congress specifically instructed the National Institutes of Health (NIH) to consider the conservation value of captive chimpanzee research, no findings on its possible impact were presented. If the biomedical laboratories that have the facilities and inclination to conduct controlled vaccine trials ‘liquidate’ their chimpanzee populations, there will be nowhere left to do conservation-related trials.”