Early surviving copy of The Brus conserved for Bannockburn anniversary

One of the two oldest surviving copies of 'The Brus' – a medieval poem famous for its vivid, early description of the Battle of Bannockburn – has been restored in time for the battle’s 700th anniversary.

The Brus is a unique and nationally important treasure. This project means that we can now make it available without having to compromise its long-term preservation.

The much-needed repair work means that the 1,400-line epic poem, one of the most important sources for historians studying Bannockburn and the Wars of Scottish Independence, can now be used properly by researchers and in public displays. Interest in the famous encounter, which was fought on 23 to 24 June, 1314, is expected to rise as a result of both the forthcoming anniversary celebrations, and the Scottish Independence Referendum.

The Brus was written by John Barbour, Archdeacon of Aberdeen, in about 1375 and covers the Wars of Independence waged by Robert the Bruce. Its centrepiece is a stirring and bloody description of Bannockburn itself, and despite various inaccuracies, it remains a significant historical document as well as one of the finest and best-known works written in early Scots. In particular, its central theme that freedom is a prize worth winning at all costs, has resonated through the ages.

No edition of the poem written in Barbour’s own hand survives, but two early versions, transcribed in the 15th century, still exist. These are kept at the Library of St John’s College, in Cambridge, and at the National Library of Scotland, Edinburgh.

After centuries of use, however, the St John’s manuscript had become badly damaged. The great majority of its pages were torn, sections were difficult to read because of dirt and marking, and the volume was so tightly bound it could not be opened without damaging the pages further, making the document virtually unusable. 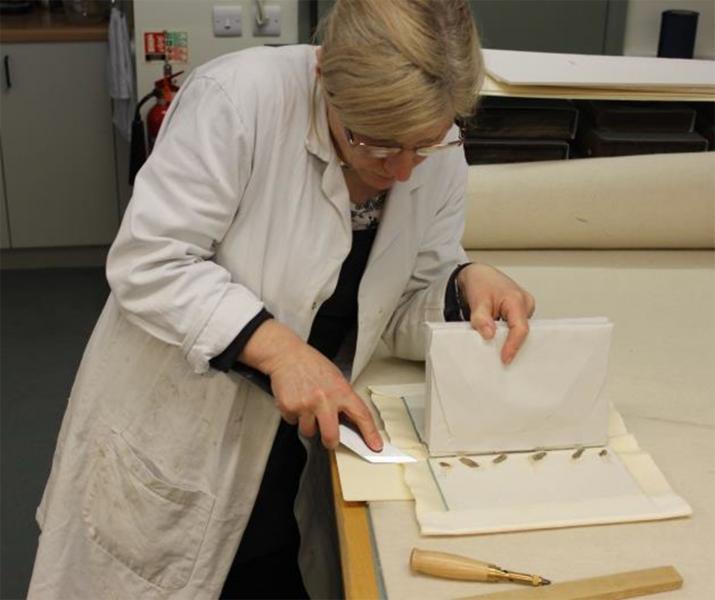 Last year, the College commissioned specialists from the Cambridge Colleges’ Conservation Consortium to conserve the text, with support from the National Manuscripts Conservation Trust. Over months of painstaking work, it was systematically taken apart, cleaned, repaired and rebound in a style more appropriate to its age.

The result is an expertly and sympathetically repaired manuscript of The Brus which scholars of the Scottish Wars, or medieval literature, will be able to use in full. Along with many of the other priceless materials in the Library’s special collections, it will also be available for visiting groups to examine, and will periodically go on public display.

“The 700th anniversary essentially gave us the impetus for doing the work,” Kathryn McKee, Special Collections Librarian at St John’s College, said. “It’s likely to result in a fresh wave of interest in Bannockburn and we wanted the book to be available in a fit state.”

The St John’s edition of The Brus was given to the College in the 1630s by Thomas, fourth Earl of Southampton. It was written in 1487, and is thought to have been transcribed by John Ramsay, Prior of the Carthusians at Perth. Quite unusually for a surviving manuscript of this time, it is written on high-quality rag paper, which, as the name suggests, was made from pulped textile rags.

Unfortunately, at some point during the late 18th or early 19th century, the book was rebound rather poorly and exposed to considerable damage during the process as a result. Although it was still regularly consulted in the years that followed, by the time the conservators were called in it was in a very fragile state. Many of the pages could barely be prised apart enough to take a photograph of their contents, without causing further damage still.

The delicate repair operation required the specialists to remove the binding, and lift the modern spine-liners and glue. Surface dirt was gently dry-cleaned from the pages, tears in the paper were repaired, and dog-eared corners flattened out. The manuscript was then resewn according to the original, 15th-century pattern, and rebound with traditional materials.

“The Brus is a unique and nationally important treasure,” McKee added. “This project means that we can now make it available to researchers, or put it on public display, without having to compromise its long-term preservation.”

The 1487 edition of The Brus, one of the two oldest remaining copies in existence, has been conserved and rebound for research and public display.