Architectural remains from a Roman theatre buried beneath the Italian countryside are providing new clues as to the importance of a town abandoned by civilisation 1,500 years ago.

The head of a lion and griffin, believed to be part of the decoration of the theatre, as well as stone blocks with steps carved into them, are helping to further revise historical understanding about the site of Interamna Lirenas, founded by the Romans in the late 4th century BCE.

The town, which disappeared following its abandonment around 500 CE, was last year mapped by geophysical analysis and imaging undertaken by a team of researchers led by Cambridge archaeologists Dr Alessandro Launaro and Professor Martin Millett from the Faculty of Classics.

The discovery of the theatre remains follows the first-ever test excavation of the site this summer and adds new weight to the team’s theories about Interamna Lirenas’ growth and importance.

Dr Launaro said: “The discovery of the theatre remains is an important breakthrough. It bears witness to the social and economic dynamism of the town in a period when modern scholarship has for long believed it to be stagnating and declining.”

“The dating of the first phase of the building to the second half of the first century BCE prompts a serious reconsideration of the urban development of Interamna Lirenas.” 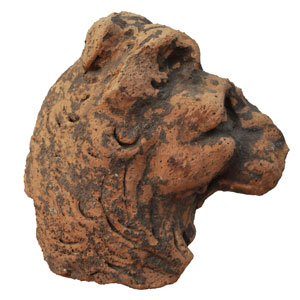 The forgotten remains of the town, which lies 50 miles south of Rome in the Liri Valley, were revealed using ground penetrating radar (GPR) and magnetometry – which measures changes in the earth’s magnetic field caused by different features beneath the surface.

Work at the site began in 2010 but the latest finds add new depths of understanding to a settlement that was wrongly believed by earlier scholars to have been a sleepy backwater of the Roman Empire for much of the 800 years of its inhabitation from 312 BCE to 500 CE.

Dr Launaro added: “The town plan was virtually unknown until we began work here with colleagues from Italy and the UK. But the presence of the theatre from the first century BCE points towards a major overhaul of the town at that time and is evidence of a thriving community - challenging all previous preconceptions of the town as a dreary and somewhat neglected outpost of the empire.”

Today, the site appears as an uninterrupted series of ploughed farmer’s fields, devoid of any recognisable archaeological feature. Before disappearing beneath the earth, the site is thought to have been scavenged for building materials in the years following its abandonment.

The original geophysical work revealed the location of the town’s theatre, marketplace and other buildings spread across the entire settlement which spans some 25 hectares. Dr Launaro and Professor Millett’s research is part of a project that aims to understand more about what happened in towns established by the Romans in Italy following her conquest. The research is led by the pair in collaboration with the Italian State Archaeological Service (Dr Giovanna Rita Bellini), the Comune of Pignataro Interamna (Mayor Benedetto Evangelista), the British School at Rome and the Archaeological Prospection Services of Southampton University, generously supported by the McDonald Institute for Archaeological Research and the Leverhulme Trust. 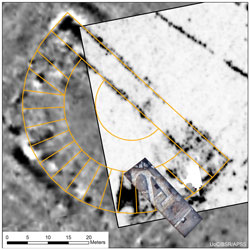 Dr Launaro said: “Interamna Lirenas is an enticing case study because, in spite of its size, it was not re-occupied at the end of the Roman period, meaning that it retained much of its original shape and features.”

Researchers knew a town existed on the site but did not excavate it in the past as it was thought that all such settlements followed the same template.

Following the discovery of the theatre, the Cambridge team carried out a test excavation of the building to gather information about the nature of the structures, their chronology and level of preservation.

However, the team’s work is not just confined to the town itself, but also its hinterland. Here an intensive archaeological survey, carried out over the last three years, has recovered a varied archaeological evidence pertaining to settlement patterns (e.g. farms, villages, villas) over the period 350 BCE to 550 CE.

Remarkably, site numbers seem to peak precisely between 50 BCE to 250 CE, the outcome of a gradual growth which had originated with the foundation of Interamna Lirenas in the closing years of the fourth century BCE. More importantly, a preliminary comparison of the archaeological finds such as pottery recovered during the rural survey has shown a close overlap, suggesting a symbiotic exchange between town and hinterland as they grew together.

“The integrated approach is making it possible to fully appreciate the significance of transformations taking place within a Roman town by casting them against a wider horizon,” said Dr Launaro. “This and other issues will be explored by us in the coming years as we excavate new areas with geophysical prospection and archaeological surveys across the countryside.”