A decade after the predators have gone, Galapagos Island finches are still being spooked

On some of the Galapagos Islands where human-introduced predators of Darwin’s finches were eradicated over a decade ago, the finches are still acting as though they are in danger, according to research published today in the Journal of Animal Ecology.

The time and energy finches spend spooking themselves by fleeing when they are not in danger could be better spent looking for food, mating, laying eggs, and rearing their young.

The study found that the finches’ fearful responses – known as antipredator behaviour - were sustained through multiple generations after the threat was gone, which could have detrimental consequences for their survival.

The work by Dr Kiyoko Gotanda, a zoologist at the University of Cambridge, is one of the first studies to look at behavioural adaptations in a species following the eradication of invasive predators. The research focused on one species of Darwin’s iconic finches - the small ground finch, Geospiza fuliginosa. Given their estimated life span, today’s finches are not likely to be the same birds that had originally developed the response to defend themselves from predators.

“These surprising results suggest that whatever influences this fearful behaviour is more complicated than just the presence or absence of invasive predators,” said Gotanda, sole author of the paper.

The Galapagos Islands provide a natural stage to compare different predator situations. Some islands have never had invasive predators, others currently have predators like domestic cats and rats that arrived with humans, while others have had these predators in the past and they have now been eradicated.

Gotanda found that finches on islands with predators were wary, and flew away from an approaching researcher - imitating an approaching predator - at a much greater distance than the finches on pristine islands without predators. This increased antipredator behaviour has been maintained on islands where invasive predators have been successfully eradicated, even though eradication happened eight and thirteen years earlier.

“While the mechanism for the transmission of the fearful behaviour through the generations requires further study, this sustained response has consequences for evaluating conservation efforts,” said Gotanda. “The time and energy finches spend spooking themselves by fleeing when they are not in danger could be better spent looking for food, mating, laying eggs, and rearing their young.”

Conservation management of species of concern on islands often involves getting rid of invasive predators. Understanding how species adapt their behaviour once predators have been eradicated – and how quickly this occurs - could better inform efforts to support the recovery of a target species. Understanding the effects of human influence such as the introduction of invasive predators could help predict how species respond to rapidly changing environments.

Gotanda also looked at the effect of urbanisation on finch behaviour and found - as is generally seen in towns and cities - the birds were less fearful as they became used to the presence of humans. On some islands the urban finches were even bolder than those on islands that had never seen invasive predators at all. This could make them vulnerable to threats like these predators, which are present in urban areas on the Galapagos. This suggests that the effects of urbanisation on species are strong enough to counteract adaptations to other human influences such as invasive predators.

When Charles Darwin visited the Galapagos Islands during his Voyage of the Beagle in 1835, he could famously get close enough to throw his hat over the birds. The animals were so unused to humans that they did not see Darwin – a potential predator - as a threat. Since then, the arrival of both humans and invasive predators such as cats and rats on many of the islands drove the birds to develop fear, and fly away at the sight of danger. Subsequent eradication efforts have been necessary to protect the iconic finches.

This research was funded by the Natural Sciences and Engineering Research Council of Canada (Banting Postdoctoral Fellowship). 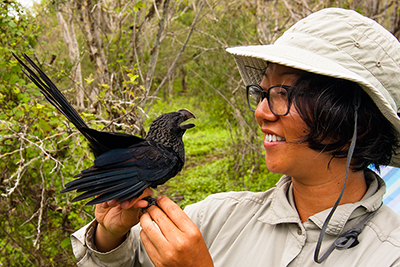 Dr Kiyoko Gotanda is passionate about asking questions and working out how to answer them. She describes the Galapagos Islands as a ‘magical place’, with iconic species that do not exist anywhere else on Earth - such as Darwin's finches and marine iguanas. Her recent research on the Islands involved getting up each day at 4:45am.

“The finches are most active at dawn, so we had to have the mist nets set up to catch them before the sun rose,” she says. “We closed the nets around 10 or 11am, when it gets too hot to handle the finches, and returned later in the afternoon to do more work such as running trials to observe how the finches behave.”

Gotanda’s research aims to understand and predict how wild animals will respond to human influences such as urbanisation, domestication, and the introduction of invasive species.

“Humans are changing our environment so rapidly that wildlife must respond and adapt, or potentially run the risk of going extinct,” she says. “I hope my research will lead to us being able to mitigate the negative effects humans can have.”

Before research, Gotanda had a career as a ballet dancer with the Joffrey Ballet of Chicago and Les Grands Ballets Canadiens. When she retired from dancing, she took an undergraduate degree in biology and volunteered in research labs. She went on to do her PhD and is now a Postdoctoral Fellow in the Behavioural Ecology group of the University’s Department of Zoology.

Being awarded her Fellowship at Cambridge was an exciting prospect. “It was a new country, new university, new supervisor, and new colleagues,” she says, and she has never looked back. “It's been an absolute joy being able to work at Cambridge - it has allowed me to interact and work with some amazing researchers, and provided fantastic opportunities I would not have elsewhere. The exchanges I've had here have really helped me to grow and develop as a scientist.”