From biotherapeutic discovery and bioproduction to cell therapy engineering and diagnostics, Cambridge technology based on making minute droplets is speeding up screening of single cells and their biological products.

Because our technology is generic it can be used across many fields, from drug discovery to algal biofuel development 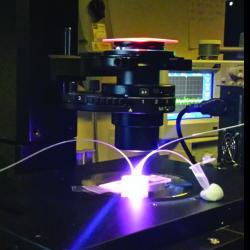 Cambridge-based life sciences company Sphere Fluidics has developed a unique new system for ultra-high throughput analysis of single cells. Based on technology that makes billions of tiny, pico- scale droplets – each acting as a miniature test tube – the system enables faster and cheaper screening across many industries, from pharmaceuticals to biofuels.

Sphere Fluidics was founded in 2010. Since then, the company has commercialised over 40 products, from specialist chemicals to research instruments.

More than 135 organisations worldwide now use Sphere Fluidics’ reagents, ‘biochips’ and R&D services, and the company has an international IP portfolio of over 50 patents.

A drop in the ocean

From nature to the scientific laboratory, the world contains myriad cells and substances. Being able to identify and select specific ones can have major consequences: they might be the biomarkers cells secrete that could allow life-threatening cancers to be diagnosed at an early stage, or the new drugs we need to combat antibiotic resistance.

Like looking for a needle in a haystack, screening vast numbers of cells and substances using conventional methods is time-consuming and costly. In the search for cures for an ever wider range of diseases, the pharmaceutical industry has exhausted many targets using traditional approaches.

Big pharma and other industries urgently need cheaper and faster screening technologies to accelerate their R&D – technologies that would give them a better chance of finding that rare one in a billion cell or molecule that could be an industry blockbuster.

Using design software and standard lithographic techniques, they developed a way of making minute pico- or nano-scale droplets encapsulated in an inert perfluorinated oil. Each tiny droplet acts as a miniature test tube or reaction vessel, which can be used to study fluorescent proteins.

The platform can produce billions of droplets, enabling large numbers of compounds or cells to be screened in parallel, and because they contain such minute amounts of fluid, the cost of reagents is greatly reduced.

The result is a powerful platform capable of screening large numbers of cells or substances much more quickly and cheaply than conventional techniques.

As the technique is generic, it can be used across a wide range of industries from pharmaceuticals to biofuels.

Because the technology is generic – simply producing minute water droplets – it can be used to miniaturise myriad reactions, from chemistry and biology to materials science.