Improving the efficiency of water treatment

At the same time that regulations are driving towards increased quality and safety of drinking water, the industry is experiencing a decreasing quality of source water. In addition, the rapidly increasing overall demand for drinking water has huge capital implications, from securing new water sources to increasing the capacity of treatment works. In a long-standing collaboration with Yorkshire Water plc., Dr Stuart Dalziel’s research focused on improving the efficiency of the Dissolved Air Flotation process in order to meet these growing demands.

What motivates me is the thought that I might be able to make a difference to real world problems. 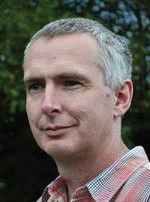 Dissolved Air Flotation is a technique widely used in the water treatment industry to remove suspended particles from water. It is a vital part of the process of transforming ‘raw’ water into safe drinking water. The principle is to generate tiny bubbles that attach to particles in the water, making them buoyant enough to float to the surface and form a foam that can be skimmed off.

Dalziel was approached by Yorkshire Water to help it deal with an unexpected consequence of the reduction in acid rain. The raw water it collected from upland areas was brown, and contained such a high quantity of tiny particles that the company’s infrastructure was struggling to cope. Dalziel’s challenge was to understand how the Dissolved Air Flotation process actually worked, and then try to improve its efficiency.

Theoretical and laboratory modeling work in Cambridge’s GK Batchelor Laboratory by Dalziel and colleagues identified the key rate-limiting factors governing the flotation process. Subsequent field measurements at Yorkshire Water showed that not only was most of the dissolved air being wasted through its uncontrolled introduction into the water tanks, but that its force was actually damaging the flocs and reducing the probability of successful floc-bubble interactions. The team’s subsequent focus on the bubble formation process analysed the conflicting requirements for energy dissipation and pressure reduction in the system. This led them to design a new type of nozzle to inject water, saturated with air at high pressure, into the flotation tank. Producing much tinier air bubbles, of a more uniform size, than previous designs, their nozzle caused flocs to rise to the surface of the water very quickly. We reduced the problem to its minimum components to try and understand those properly, then built it up again. Understanding the processes that cause very small bubbles to merge together was an interesting intellectual challenge.

Prototype nozzles installed into one of Yorkshire Water’s dissolved air flotation tanks confirmed the immense value of this new nozzle design. Its benefits include an increased effectiveness of the introduced air, a substantially reduced breakup of flocculated particles in the water, reduced energy requirements, and a reduction in the concentration of chemical additives required to achieve flocculation. With a marked improvement in the quality of the treated water, the costs of subsequent filtration and cleaning of downstream systems were also significantly reduced. Yorkshire Water conducted further field trials that suggested 20% more raw water could be treated using the new nozzles whilst maintaining an improved water quality, thus alleviating the need to build extra flotation systems to cope with increasing water demand. Estimating energy savings of 10-15%, which in turn would contribute to substantial financial savings, the company rolled out plans to retrofit nozzles across multiple sites at Yorkshire Water and its sister company, Kelda Water Services. With patent protection in the UK and USA, Yorkshire Water have now also licensed the use of the nozzles to United Utilities, Anglian Water and Northern Ireland Water. Dalziel’s tiny bubbles have made a massive impact.