Reflecting on the hit and miss nature of online clothes shopping, a Cambridge graduate turned to Cambridge engineering researchers to develop a technological solution. The company they created is now changing the face of internet fashion retailing.

The F&F Virtual Fitting Room has been so successful on Facebook that we have made it part of our main website! 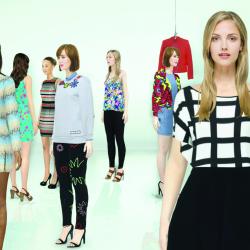 Since Cambridge economics graduate Tom Adeyoola and postdoctoral engineering researcher Dr Duncan Robertson founded fashion technology firm Metail in 2008, the company has grown to employ some 40 staff , including seven PhDs, attract more than $20m in funding and secure contracts with some of the world’s biggest retailers.

Together with Cambridge computer vision expert Professor Roberto Cipolla, they developed MeModel, an ingenious tool for shoppers that turns a simple 2D photograph of themselves into a lifelike 3D model to help them shop online.

Metail’s first client was Tesco, which launched MeModel on its Facebook page in 2012. The trial was so successful that Tesco extended the service to its main website. Other retailers, such as Warehouse, followed suit and thanks to its technology, Metail has helped Shop Direct grow sales and reduce returns. By 2013, more than 300,000 people had created their own MeModel, and Metail is now working with UK broadcaster ITV, which features MeModel on its daily lifestyle show This Morning.

Online shopping has revolutionised the retail sector. At the click of a mouse customers the world over can buy anything from anywhere, helping boost businesses and create new companies.

But internet retailing comes with challenges. While shoppers are happy with books and groceries bought online, many of the clothes they order end up being returned to retailers because customers cannot get an accurate idea of how well a garment will suit their size, body shape and colouring.

It was an issue Adeyoola had mulled over during a holiday in Vietnam. Noticing the tourists who were buying great value, tailor-made clothing, he came up with the idea of the virtual changing room – something to help online customers find garments that fitted them better.

The vision of Metail – the company he and Robertson founded – was to provide online clothing retailers with technology that enabled customers to turn a 2D photograph of themselves into a lifelike 3D image of themselves which displayed their own individual measurements, colouring, and even hairstyle.

To turn the idea into a reality, they went back to Cambridge’s Department of Engineering and Cipolla, its computer vision expert.

From 2D photo to 3D model

Since 1997, Cipolla's research has pioneered new ways of reconstructing 3D models of an object from a single, 2D photograph.

Based in the computer vision group at Cambridge’s Department of Engineering, Cipolla and his team first worked out how to determine where a photograph had been taken from by studying the perspective and vanishing points in a 2D image of an object.

Focussing on pictures of buildings, they devised algorithms allowing them to reconstruct architectural scenes. By extending this to multiple viewpoints they produced Photobuilder – a PC-based tool to generate 3D models of buildings in the Virtual Reality Modelling Language, VRML – in 1999.

Between 2003 and 2006 the team moved on to model more complex 3D objects and worked out how to automatically recover the shape of an arbitrary object from its silhouettes from a series of uncalibrated photographs.

The final chapter of the story came when Metail approached Cipolla and asked him to come up with a way of using this research to turn a single, uncalibrated image of the human body into an avatar that shoppers could use to ‘try on’ clothes in a virtual changing room.

Drawing on more than a decade’s work, Cipolla’s team refined their research to produce accurate 3D images from a customer’s photograph and basic body measurements, something that proved possible provided the photograph was taken with the customer standing in a doorway, which acted as an essential reference point.