By developing BioBullets – an elegant and environmentally-sensitive way of controlling one of the world's most invasive freshwater pests – University of Cambridge scientists will help utility companies save millions of pounds. 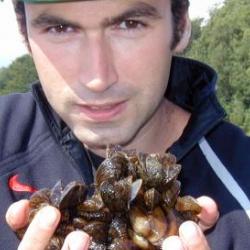 Since Dr David Aldridge and Dr Geoff Moggridge set up BioBullets in 2000, the company has achieved remarkable success in developing products to combat zebra mussels. One of the world's most invasive freshwater pests, the zebra mussel costs utility companies worldwide billions of dollars to control.

BioBullets products have been successfully tested in full-scale trials in three of the UK's largest water companies including Thames Water, which in 2010 alone spent £1m clearing zebra mussels from its raw water pipes.

BioBullets is now developing products aimed at other economically and ecologically important aquatic pests, such as Asian clams and sea squirts. And, because behind BioBullets is a new and innovative way of delivering molecules to filter feeders, it is also being harnessed to boost productivity in shellfish aquaculture – a major market with a key role in global food security.

Native to the Caspian and the Black seas, the zebra mussel has invaded most of western Europe and large parts of North America. Unlike native mussels, zebra mussels have a beard-like thread that makes them adept at attaching to solid surfaces from other shellfish to water pipes.

As a result, zebra mussels are causing major ecosystem change around the world, driving native species to extinction, and having a major economic impact on water companies and powers plants. In North America alone, zebra mussels cause damage costing an estimated US$5 billion a year.

Current control methods rely on chlorine, but as a means of killing zebra mussels, chlorine is far from efficient. When they detect chlorine in the water, the mussels close their shells, and can remain shut for up to four weeks, meaning continual dosing with chlorine is required.

Chlorine is also dangerous to store and handle, damages other freshwater organisms, and because it reacts with organic matter to produce carcinogens, its use in raw water is being outlawed worldwide.

Imagining a better solution, in 1998 Aldridge and Moggridge began experimenting with ways to encapsulate a biocide that would evade zebra mussels' defences. Their aim was to design a Trojan horse – a lethal particle that the zebra mussel thought was a food item, and that would kill the zebra mussel without harming non-target species.

Key to success was learning more about how zebra mussels feed, something Aldridge uncovered using a tiny endoscope.

Then came the clever chemistry needed to disguise a biocide as a tasty morsel for a zebra mussel, finding not only the right size of particle, but the correct shape, surface texture and buoyancy.

Finally they found a manufacturing partner who could help them build a plant and produce products with reliable formulations, and packaging that would give BioBullets the correct shelf life as well as making them safe and easy to handle and deliver.