Where there’s muck there’s aluminium (if not brass)

Where there’s muck there’s aluminium (if not brass)

Technology developed at the University of Cambridge lies at the heart of a commercial process that can turn toothpaste tubes and drinks pouches into both aluminium and fuel in just three minutes.

In the UK, roughly 160,000 tonnes of laminates are used per year for packaging, which means at least 16,000 tonnes of aluminium is going into the ground. Just imagine if we could routinely recycle this

It started with a bacon roll and a microwave oven, and now it’s poised to transform the recycling of a packaging material that has been as unrecyclable as it is useful.

The bacon roll, as the story goes, was microwaved for so long it turned into a charred mass of carbon that began to glow red-hot. What was happening was an intense heating process called microwave-induced pyrolysis.

On hearing about the ‘over-microwaved’ bacon roll from an acquaintance, chemical engineers Professor Howard Chase and Dr Carlos Ludlow-Palafox (a PhD student at the time) at the University of Cambridge wondered whether the process could be exploited to recover useful materials from packaging wastes.

Particulate carbon is an efficient absorber of microwaves and can transfer this thermal energy to adjacent materials. If the adjacent material is organic, such as plastic or paper, it breaks apart (or pyrolyses) into smaller pieces; if the material is a metal attached to the plastic or paper, the metal can be recovered in a clean form after the attached organics are pyrolysed.

Fifteen years later, and the technology they developed is now being used in a commercial-scale plant designed, built and operated by Cambridge spin-out Enval Limited. Founded by Ludlow-Palafox, with Chase as R&D Director, Enval is using the plant to demonstrate the capabilities and economics of the process to investors and waste handlers.

Enval has focused on plastic–aluminium laminate packaging. Prized by manufacturers for its lightness, cheapness and ability to protect the contents from light and air, the packaging is commonly used for food, drink, toothpaste, pet food and cosmetic products.

However, the combination of plastic and aluminium in the packaging presents a technical recycling challenge that until now has been unsolved; instead, items packaged like this contribute to the millions of tonnes of rubbish disposed of in landfill each year. For the brands who package their consumer goods this way, the ‘recyclable logo’ on the packaging, and the sustainability credentials that go with this, has been all-elusive.

“We have carried out a life-cycle assessment of the packaging and it’s still environmentally better to use these laminates even though they are not recyclable, just because so little materials and energy goes into making and transporting them compared with alternatives like glassware and cans,” said Ludlow-Palafox.

“There is no real drive to replace them and their market use is increasing by about 10–15% every year. In the UK, roughly 160,000 tonnes of laminates are used per year for packaging, which means at least 16,000 tonnes of aluminium is going into the ground. Just imagine if we could routinely recycle this.”

The solution he and Chase developed with funding from the Engineering and Physical Sciences Research Council started in a relatively simple way: they placed a pile of particulate carbon and some shredded laminated packaging inside a conventional 1.2 kW kitchen microwave, replaced the air inside the oven with nitrogen and turned the microwave up to full power until the temperature increased to about 600°C.

When they opened the door two minutes later, the laminated material had been separated into clean aluminium flakes and hydrocarbon gases and oil.

The basic chemistry is still the same in the commercial-scale plant but the oven is now 150 kW and large enough to be housed in a 100 m2 industrial unit. It takes just three minutes to convert waste into aluminium for smelting, and hydrocarbons for fuel, and with no toxic emissions.

Now fully commissioned, the plant can recycle up to 2,000 tonnes of packaging a year – which, say the researchers, is roughly the amount handled by regional waste handlers – and it generates enough energy to run itself. Enval now has an arrangement with manufacturers of plastic–aluminium laminates to recycle their industrial scrap at less than what they would have spent on sending it to landfill.

The researchers have, in effect, turned into commercial waste handlers – something they would never have imagined back in the 1990s. “While we were getting into the world of laminates it didn’t cross our minds to start a company… we just wanted the process to become a reality,” said Ludlow-Palafox. “In the end, the investors [Cambridge Capital Group and Cambridge Angels] said there is no one else who knows the process as well as you, you might as well do it! 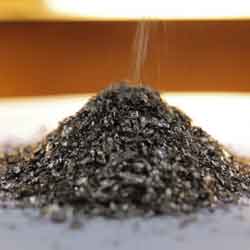 “We knew that the patented technology offered a genuine recycling route for this type of packaging but that the waste industry can be slow to take on new technology – the margins in environmental services are small, and we needed a working, full commercial-scale plant to convince them that the process was viable,” said Chase, who estimates that a plant like theirs would pay for itself within three years. “In parallel, we were being contacted by the brands who use the packaging, asking how they could help.”

The commercial-scale plant is part-funded by Nestlé and Kraft Foods/Mondelez International.

“It was a chicken and egg situation,” said Ludlow-Palafox. “No one is going to buy this technology unless this type of waste is separated for recycling, but the waste wasn’t going to be separated because there has been no process to recycle it. We had to break that negative loop somehow. Now we have the commercial-scale plant, we can show waste handlers the benefits and encourage local authorities to implement a selective collecting system.”

Meanwhile, the scientists are keeping an eye on future recycling prospects. Research into the microwave pyrolysis of different types of wastes continues in Chase’s group in the Department of Chemical Engineering and Biotechnology. “It’s crucial that we continue to look for new opportunities for recycling valuable materials while simultaneously eliminating the need to send wastes to landfill or incineration.

“We’ve demonstrated that a lot of troublesome waste materials can be pyrolysed using our microwave technology but it’s not always economically sensible to do it; the challenge now is to identify which processes are likely to be commercially viable, and which of those will attract the necessary investment funding to bring them into commercial reality. This is a business sector that is comparatively unfamiliar to most investors who regularly commit to innovation in other areas. By demonstrating the societal and economic benefits of green technologies, we hope to secure the necessary investment to transform innovation into successful commercial practice.”