Dr John Leigh has written the first book exclusively devoted to the duel in literature. In Touché, he offers a compelling picture of the ways in which novelists, playwrights and poets have used duelling as a trope to reveal the extent of manly valour, trickery and sheer foolishness.

Two of the most famous duels in English literature take place at the beginning and end of that giant among novels, Samuel Richardson’s Clarissa.

In the first encounter, Robert Lovelace, Clarissa’s would-be suitor, is challenged to a duel by her brother, James Harlowe. Their antipathy dates back to a “College-begun” tiff and has been inflamed by Lovelace’s interest in Clarissa and her sisters. During their bout, Lovelace has the chance to kill Harlowe but “gives him his life”.  The incident helps to establish Lovelace, “a finished libertine”, as a man who lives his life as a sort of extended duel, continually challenging fate itself.

As the book draws to a close, Clarissa’s cousin William Morden seeks to avenge her death in a duel with Lovelace. In doing so, Morden ignores Clarissa’s pleas that “vengeance is God’s province” and that her good-natured cousin should not risk losing his life to a guilty man. Letters are exchanged as the details of the duel are fixed; rapiers are chosen over pistols. When Morden kills Lovelace, the villain perishes but the victor risks carrying a moral burden that will never leave him.  The lack of a winner is one of the great paradoxes of the duel.

In Touché: The Duel in Literature, Dr John Leigh (Medieval and Modern Languages) explores expositions of duelling in three centuries of writing. The first ever book devoted exclusively to the depiction of duelling in fiction, drama and poetry, Touché is pan-European in its scope and scholarly in its unpacking of contests that range from the comic stand-offs between Sir Lucius O’Trigger and Captain Jack Absolute in Sheridan’s The Rivals to the elegantly orchestrated cut and thrust of Dumas’s musketeers.

When Richardson wrote Clarissa, in the mid-1700s, duelling had long been illegal in Britain. With beautiful irony, laws renewed over the centuries made it a practice punishable by death. Arguments against duelling shifted over the centuries: framed in the 17th century as a theological wrong, it was condemned as barbarous (and non-classical) in the 18th century, and, finally, in the 19th century as an unseemly display of primitive urges. In his famous 1841 study of fashionable delusions, Charles Mackay likened duellists to “two dogs who tear each other for a bone, or two bantams fighting on a dunghill for the love of some beautiful hen”.

But its appeal endured, in literature as in life. Duels feature in the works of dozens of British writers: Tobias Smollett was prodigiously fond of duels (his sword-happy characters include the wonderfully named Roderick Random and Peregrine Pickle) as were Sir Walter Scott, William Thackeray and GK Chesterton. Among the many French writers intrigued by duelling are Molière, Hugo and Maupassant. In Russian literature, Anton Chekhov and Alexander Pushkin (the latter an inveterate duellist) are masters in the telling of stories in which the duel plays a pivotal part.

The sheer theatricality of the duel makes it an irresistible literary device, whether to demonstrate a gentleman’s valour in facing down a rogue or to mock the posturing of a foolish buck. The richness of the drama lies in the stage directions: the count-down to the allotted hour, the scene at dawn or dusk, the pacing out of the exact distance between opponents, the checking of weapons, and the sobbing of bystanders. The deeper fascination, for the reader, is with the process by which words become deeds and the freedom of the nobleman is enmeshed in an utterly inexorable, irrevocable process.

Duelling is a posh pursuit, imbued with notions of privilege and sportsmanship. Fencing and swordsmanship, like dancing and riding, were accomplishments that defined the wellborn young man. Likewise, many of the most celebrated bouts in fiction depict noble combatants seeking to uphold or defend family honour against slur or slight. As Leigh writes, the duellist is the “antithesis of the bourgeois, because he fights not for gain from his adversary but to declare who or what he is”.

But there are notable exceptions. Charles Dickens, most of whose characters are working or middle class, incorporates duels in several of his novels. In Pickwick Papers, duels generally assume the form of a comic set piece. “A duel in Ipswich!... Nothing of the kind can be contemplated in this town,” says the magistrate, summoned to halt plans for a confrontation between Samuel Pickwick and Peter Magnus. In Nicholas Nickleby, the protagonists are highborn but the message to the reader is that all life hangs on a thread. The tragedy of Lord Frederick Verisopht’s death, at the hand of Sir Mulberry Hawk, is set against the majesty of the rising sun and the running river - and the “twenty tiny lives” present on every blade of grass.

Leigh divides his text into themes, slotting duels into categories of ‘comical’, ‘poignant’, ‘judicial’, ‘romantic’ and ‘grotesque’. In a chapter devoted to the ‘paradoxes of the duel’, he explores the incompatibility of a pursuit steeped in style and swagger with the seriousness of its likely outcome – the finality of death. The elegant language of duelling, sometimes couched in French, and its insistence on carefully regulated protocol, seemingly elevates it from the notion of brutal murder. But, in the end, the calculated nature of duelling is perhaps even more chilling. 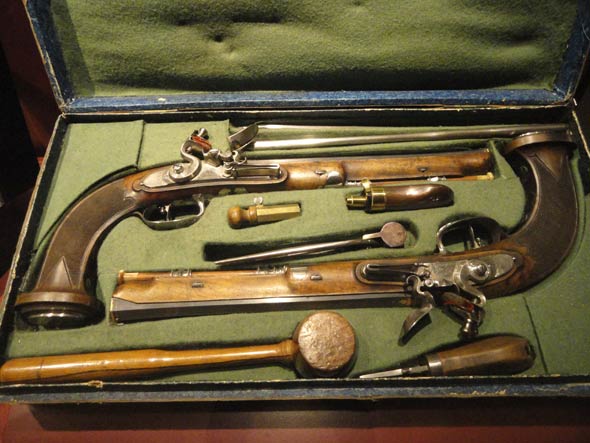 The noblest of duelling weapons is the sword. Firearms bring a certain sense of anonymity; sometimes they gain an identity all of their own. In his poem Eugene Onegin, Pushkin describes in steely detail the mechanisms of the pistols loaded by Onegin and Lenski. “The weapon,” writes Leigh, “acquires a sinister life of its own, as one action leads mechanistically and remorselessly to another, before the final, fateful event is triggered.” In stark contrast, as Lenski’s life ebbs away, the poet turns to nature to describe the slow fall of snow and the sudden grip of cold.

The slaughter that took place in the muddy trenches of the First World War eclipsed the aristocratic notion of duelling as a test of nerve and a clean way of settling scores. But single combat remained, for some, an idealised form of warfare. Leigh writes that the Australian Spitfire pilot Richard Hillary recounts in his book The Last Enemy that: “In a fighter plane, I believe, we have found a way to return to war as it ought to be, war which is individual combat between two people, in which one either kills or is killed.”

Duels have been considered anachronistic for some four hundred years – but we remain fascinated by those who could take lives after taking exception.

Touché: The Duel in Literature is published by Harvard University Press. John Leigh is a Fellow of Fitzwilliam College, University of Cambridge. 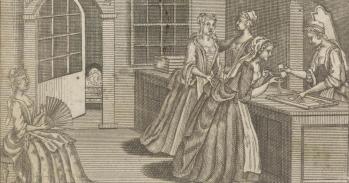 "The Code Of Honor—A Duel In The Bois De Boulogne, Near Paris", wood engraving by Godefroy Durand