Take unlimited creativity, add multiple platforms, throw in faster and smarter tech and you’ve got the ingredients for the biggest entertainment industry shake-up since the introduction of sound.

All the boundaries between cinema, TV, DVD and online have become blurred

The battle lines have been drawn: consumers have broken free of traditional formats and schedules, and we now want our content wherever and whenever it suits us. It’s the biggest disruption the entertainment industry has ever seen, driven by new technology. As Senior Lecturer in Strategy and Director of the MPhil in Management at Cambridge Judge Business School (CJBS), Dr Allègre Hadida is always fascinated by what’s driving change. So she posed the question: just what will we be watching in 2020 – and what will we be watching it on?

Hadida identifies several shifts that have recently changed the way we consume audio-visual content: first, platform proliferation. “TVs have become almost obsolete in most homes,” she says. “Now we can watch on mobiles, tablets – and soon, probably, watches. This has reshuffled the chronology of media. All the boundaries between cinema, TV, DVD and online have become blurred.”

Then there are our new patterns of binge-watching, which is changing our relationships to episodic content. Take the second season of Netflix’s blockbuster House of Cards: when it became available, all at once 660,000 viewers chose to watch the entire season in the space of three days. They didn’t want to wait a week for a new episode. So Netflix ensured they didn’t have to. “Binge watching has been allowed by the availability of content online and on those mobile platforms,” Hadida points out. “But will it change the narrative structure we adopt when telling stories and the way we produce stories?”

And what of the many new platforms – Amazon Instant, Sony’s Crackle, Walmart’s Vudu – emerging to serve our insatiable desire for new stuff? “There’s an evolution in the value chain of media production,” says Hadida. “Content aggregators such as TV channels have a growing concern that they might be squeezed out of that value chain altogether, as we increasingly find our own content and watch it without their filters. There’s a growing trend of hitherto content distributors going into content production. By 2020, will Netflix still exist, for example? Will Amazon be the one-stop shop for everything content related?”

But it’s also easier for anyone with an idea and a bit of technical know-how to get their content in front of millions. Millennials now spend more time watching amateur YouTube content than they do at the cinema. The new YouTube superstars are beauty vloggers like Zoella or Minecraft movie maestro Stampy, building vast audiences with little more than a webcam and an eye for what works. The content providers know that the next generation of talent is incubating online, and that’s where they’re looking. But will this see a downturn in quality? “I see five-year-olds watching content on YouTube and getting bored if it lasts more than five minutes,” says Hadida. “We’re told quality content is key – we have HD quality – but if thousands of people are now watching very poorly filmed amateur videos, 50 times in a row, what happens to their perception of quality content then?”

So where next for filmed entertainment? How will its nature and format change over the next five years? Who will be the winners and losers? We asked three industry insiders for their insights into Hadida’s question.

Two major changes will drive what we watch. The first is data. Take Google and Netflix, two of the biggest data aggregators in the world. They know more about us than we know about ourselves, and they’re vying for our eyes to watch their content. So they’re creating content based on what they think we’ll like. House of Cards was created because Netflix looked at the actors and directors people liked. They liked Kevin Spacey and David Fincher. So why not put them together? That data-driven content creation means we’ll always have a show we’ll want to watch. But there’s a danger there: what about discovering new content? How do we get a show that we don’t know we want yet – like Breaking Bad? So finding new shows, that’s going to be a new problem to solve. We don’t want to watch the same shows week after week. We tell ourselves we do but I don’t think that’s what we really want.

And then there’s symmetry – in information, and in ability. To elaborate: there are a lot of stakeholders in the industry. You have a lot of agents who negotiate for the stars, you have unions who protect screenwriters and directors and so on. But now, there’s a lot of information coming out from behind the curtain – how to make a movie. How to finance a movie. Where to find talent. Now people are saying: if we know all this, what do we need agents for? And we also have this symmetry of ability. Kickstarter and Indiegogo have made it possible for anyone to raise the money for a film, and get it out there themselves, getting a fan base – even if it’s just a seven-second Vine. People are thinking: hey, I can do that. Who wins? The consumer. You guys can just sit back and enjoy it.

It’s predicted that by 2020, China will be the world’s biggest market for movies for viewership and box office, and will surpass the US. We’ll also be seeing more big data used to craft and create not just TV shows but also films. We’re already seeing this. A lot of films are using a lot of foreign locations and stars to increase their sales. Transformers: Age of Extinction was a massive hit in China and featured a lot of Chinese locations and Chinese stars like Li Bingbing. Look at Fast Five – it used Brazilian locations, and its South American box-office was huge. Hollywood’s been forced to wake up to the importance of foreign markets. To be honest, I didn’t use to care that much about them. That’s all changed.

You’re going to see a lot more day-and-date releases – where a film is simultaneously released in cinemas and other platforms. Amazon is going into theatrical distribution. They’re going to be releasing, they say, up to 12 films a year. Ten years ago, there was a six-month window between a film being released in the cinema and getting it on DVD. It’s been shortened and shortened. Now, with Amazon’s film, it’s going to be three weeks. A lot of the theatres are saying they won’t show Amazon movies because of that. They want their window. So there’s going to be a huge fight between the theatre owners and online distribution services.

Will people still be going to the movies? Sure. But the entire theatre atmosphere is going to change. You’re going to see a lot more luxury offerings in theatres. They’re popping up here a lot in LA right now. And they are pretty much all sold out at weekends. They’re charging a premium for services such as having certain showings where kids aren’t allowed. They serve alcohol. You get a full menu and waiter service. It’s high end. It’s all about the experience. People still want that social element that the movies provide.

Suranga Chandratillake (University of Cambridge, 2000) is a General Partner at Balderton Capital. He was previously an entrepreneur and engineer. Suranga founded blinkx, the intelligent search engine for video and audio content in Cambridge in 2004. He lead the company as CEO through its journey of moving to San Francisco, becoming profitable and going public in London where it achieved a peak market capitalisation in excess of $1bn.

To start with, what are we going to be watching this stuff on? I believe that by 2020, every single screen that we have access to will be a fully networked device that knows who you are. So whether it’s your watch, your computer laptop screen, your desk monitor, your TV, tablet or phone – they will all have a high-speed internet connection and be able to deliver TV and video content. And most importantly they’ll know who you are. There’s already talk of how Apple and Google are both looking at using front-facing cameras on phones to recognise who you are.

And because it will know who we are, it will know what we’re interested in – something that’s suddenly become available that we ought to know about, whether it’s personal – like a voice message from your mum – or whether it’s larger in concept – a TV show that you might like, a relevant event. So a pervasive video environment that is personalised and aware of the individual.

Gone will be the days of having different kinds of video experiences tethered to different devices. We’ll access anything, any way, based more on when we want to consume, when we have a free minute, rather than something we’re happy to be sat in front of. Thus far, video’s been very much controlled by this cycle of adverts and hours and half hour. I think that’s going away and I think we’re going to see the birth of some really exciting new formats. I think we’ll see a lot of experimentation around that kind of thing.

But it will be hard, I think, for the guys in the middle. There is still a lot of work to be done – facilitating payment systems, helping people discover new content, finding out what’s good and what’s not so good, curating content, bundling stuff that’s relevant together. That’s not all going to be done by computers. But the organisations that have traditionally done that for us, until now, are the TV networks, film studios and music labels, I’m not sure that they’re set up to do it in this new world. Some of them will figure it out and transform themselves. Others will cling on to the old models for too long. And still others, of course, will build entirely new, huge companies. That’s going to be the really interesting shift. 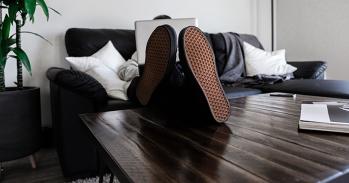 Opinion: Coronavirus: five ways to be a better manager when working from home