Natural killer cells – a vital part of the immune system – have a dual role in protecting against infection and ensuring reproduction. Scientists suggest that the multi-tasking ability of these cells helped humans to spread out of Africa.

Scientists suggest that genetic adaptations to the human immune system contributed to the success of early humans in migrating out of Africa around 800,000 years ago.  An opinion article, published last month in the journal Nature Reviews Immunology, argues that a genetic signature of these adaptations is evident in modern human populations in the form of a wide diversity of receptors in the natural killer (NK) cells which are a vital component of the immune system.

NK cells have two functions which are essential to survival. One role is to fight off invading cells when disease threatens. The other role is to control blood supply to the developing foetus during pregnancy. Both these functions depend on pairs of receptors being switched on and off. Because NK cells face competing demands, their receptors must perform a ‘juggling act’ that keeps a finely-tuned balance between the need to repel infection and the need to ensure successful reproduction.

The authors of the article – Professor Ashley Moffett of the University of Cambridge and Professor Peter Parham of Stanford University – drew on complementary areas of expertise to take a long view of the evolution of NK cells in primates, including humans, and explain why our immune system genes are widely polymorphic (genetically variable) today.

Professor Moffett is a pathologist whose work looks at how the maternal uterine immune system regulates the process of placentation that occurs in the womb when nutrients are transferred from the mother to the growing baby. Professor Parham is an evolutionary biologist whose research focuses on the development of the immune system from our earliest ancestors – primates related to chimpanzees and orang-utans as well as to humans – right up to the present day.

NK cells are essential to the immune systems not just of humans but also those of other primates. The efficiency of these cells in defending against infection and regulating blood flow in pregnancy depends on diversity in the receptors that play an important part in these tasks. Chimpanzees have a remarkable array of NK genetic diversity to draw on while orang-utans have a much smaller repertoire, with human NK genetic diversity falling between the two.

It is suggested that humans were subject to particular selection pressures that prompted the immune system to find a compromise between immune defence and reproduction. This compromise facilitated the development of the bigger brains that enabled archaic and modern humans to migrate out of Africa and populate other continents.

For many thousands of years, human populations have gone through cycles of disease epidemics followed by population growth, resulting in one set of receptors being alternatively favoured over the other as a process of natural selection came into play. While the receptors in NK cells allow the transfer of nutrients to the developing foetus, they also guard against the infant brain getting too large to be delivered safely.

Professors Moffett and Parham propose that expansion out of Africa was associated with ‘bottlenecks’ in the human population that threatened our ancestors’ genetic resourcefulness. They suggest that modern humans mated with archaic humans such as Neanderthals, which re-introduced receptor diversity and thus improved the survival rates of individuals carrying genes from these genetically divergent parents. 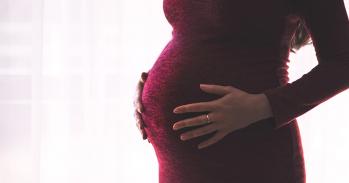 Cast of Laetoli footprints, Tanzania, in the Smithsonian Museum of Natural History