A space mission to create the largest, most-accurate, map of the Milky Way in three dimensions has been launched today. Astronomers say the data gathered by the satellite will “revolutionise” our understanding of the galaxy and the universe beyond.

We will go beyond what we can see to understand reality. We are going to discover completely new things, things we would think are impossible

Gazing into the sky on a starry night, don’t be deceived by the apparent peace and tranquillity above you. The celestial ballet of stars that dance and flicker gently to the human eye are raging and burning in the near vacuum of space, living and dying with a beauty, ferocity and magnificence that is almost impossible to comprehend.

The Milky Way, home to planet Earth as it sweeps around the Sun at 67,000mph, is so vast it defies normal explanation. We know how many stars there are – more than 100 billion – because we can count them in the sky. But how do we know how far away they are, or how old, or how they differ in size and shape, and how do we know what other objects and matter make up the celestial puzzle?

Earlier today, a rocket blasted into the sky from a launch site in French Guiana and travelled 1.5 million km to reach its destination in orbit around the Sun. The spacecraft is called Gaia. Its mission, funded by the European Space Agency and involving scientists from across Europe, is to make the largest, most precise, three-dimensional map of the Milky Way ever attempted.

It will be a census of a billion stars spread across our galaxy. The results, says Professor Gerry Gilmore from Cambridge’s Institute of Astronomy (IoA) and the Principal Investigator for UK involvement in the mission, “will revolutionise our understanding of the cosmos as never before.”

“Our understanding of what’s out there has been driven by looking at what we can see. We’ve never had a genuine opportunity to look at everything, to know what’s there, and to know where they are in relation to each other. We don’t even know how much we don’t know – there are sure to be objects out there that don’t even have names yet, since we don’t yet realise how strange they are.”

During its five-year mission, Gaia’s billion-pixel camera will detect and very accurately measure the motion of stars in their orbit around the centre of the galaxy. It will observe each of the billion stars about a hundred times, helping us to understand the origin and evolution of the Milky Way.

Every celestial object preserves something of the era during which it was born. So, as well as mapping the sky as we see it today, the Gaia mission will allow us to look back billions of years into the past – making possible what some have called a ‘time-lapse video’ of the birth and life of our galaxy.

Scientists involved in the project also hope that Gaia will be able to detect 10,000–50,000 planets beyond our own solar system, as well as some 10,000 exploding stars, or supernovas, many before they reach their maximum brightness, providing an early warning for scientists back on Earth who wish to study them.

But it’s not just those stars ablaze with nuclear fusion at their burning heart that the scientists are interested in; Gaia is also looking for brown dwarves – failed stars that never truly ignited and are left to drift across space as interstellar itinerants. And, looking closer to home, the spacecraft will provide an inventory of our Solar System’s asteroids and comets, from the Near Earth Objects, to those located in the frozen furthest reaches of the Outer Solar System, the Kuiper Belt.

The sensors on board the spacecraft will be able to detect objects so faint the human eye would have to be nearly 4,000 times more powerful to see them. “This accuracy is equivalent to measuring a shirt button on the moon as seen from the Earth,” said IoA scientist Dr Floor van Leeuwen, manager of the Gaia data processing in the UK. “It means we have to have the highest-capability computers to analyse the data.”

Test data will soon start streaming back to a specially built computer at the IoA and powerful clusters at four other computing centres in Europe. Within a few months, the satellite will be fully operational. Over its entire lifetime, Gaia will download around 100 TeraBytes of data, equivalent to 32,000 hours’ worth of DVD movies.

Gilmore estimates that the first 3D maps will be ready in two years: “3D mapping involves combining complicated algorithms: we are moving, the star is moving and the stars will also be wobbling if it has planets around them. You have to process these three motions. But for the same reason, we’ll be able to discover tens of thousands of planets around stars just by examining the wobble.”

Perhaps as exciting as the other projected discoveries is the ability of Gaia’s scientific harvest to be used to test some of the fundamental premises of astronomy. “With Gaia, we can ‘calibrate the calibrators’ on which our cosmic knowledge is built,” explained van Leeuwen. “If you provide a major improvement in the accuracy of the foundations in astronomy, this works its way all the way through the field for decades to come.”

For example, Gaia will provide the most precise test to date of Einstein’s theory of General Relativity. Because Gaia can measure positions so accurately, it will be able to spot tiny systematic deviations in the positions of stars caused by the bending of light caused by massive objects, such as our own Sun and Jupiter.

Gaia may also be able to help in the future hunt for Einstein’s prediction of ‘ripples’ in the space-time continuum. So far undiscovered, Einstein thought gravitational waves might be able to alter the apparent positions of a group of stars, by stretching space-time. The spacecraft will help astronomer’s theorise on the possible strength of such ripples, which might have been created during the Big Bang itself.

“There are literally hundreds of questions like this – why is the universe the way it is? Where did the Milky Way come from? What’s it really made of? Exactly how much does it weigh? How did it get to be like it is?” added Gilmore. “We will go beyond what we can see to understand reality. We are going to discover completely new things, things we would think are impossible.”

Latest images from the Gaia project

Disguised in a crowded field of stars, the tiny white dot highlighted in this image 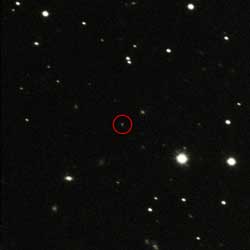 is none other than ESA’s Gaia satellite as seen with the Very Large Telescope Survey Telescope at the European Southern Observatory in Chile on 23 January.

To measure Gaia’s position in the sky,  a network of small and medium telescopes are monitoring the spacecraft on a daily basis. This information is being fed into the orbit reconstruction being performed at ESA’s Space Operations Centre, yielding an accuracy of 150 m on Gaia’s position and of 2.5 mm/s on its motion. This image is the result of a close collaboration between ESA and the European Southern Observatory to observe Gaia.