From text to texting: 10th century Greek manuscript is brought into the digital age

A tenth century Greek manuscript, one of the latest additions to the Digital Library, shows how the transmission and reinterpretation of written knowledge over the centuries still continues in today’s digital age.

Digitisation has enabled us to take unique treasures and give them to the world for free, and created a new way of engaging in a process which is as old as language itself.

Cambridge’s Digital Library digitisation programme – in which rare and important texts are photographed and made available online – is part of a long tradition of the passing on of written knowledge. Down the centuries, scholars have sought out texts for different purposes – to increase scientific understanding, to acquire knowledge developed by other cultures, or to promulgate a particular religious or political viewpoint. Initiatives like the Digital Library are making rare texts, which previously could only be seen by a limited number of people, accessible to all, and allowing readers to engage with them in an active way - zooming in on the tiniest detail, browsing entire documents quickly and easily, linking to related texts and further research, and sharing and discussing what they find online and in social media.

In the 13th century, scholars in the West were hungry for the knowledge that could be gleaned from the Greek speaking world, and one of the Digital Library’s newest additions is a wonderful example of how texts were sought out at that time. A beautiful item in itself, the story of MS Ff.1.24’s journey through the hands of various collectors and scholars, of how it was interpreted, annotated, translated and repackaged, and how digitisation enables the process of interpretation and transmission to still continue today and into the future, makes a fascinating tale.

MS Ff.1.24 is a Greek manuscript dating from tenth century Constantinople, which documents what were believed at the time to be the dying words of the sons of Jacob, the patriarchs of the Old Testament. With the movement of the Crusades, and particularly after the fall of Constantinople in 1204, scholars began to have access to texts in Greek containing important theological, philosophical and scientific learning that was previously unknown in the West. One who was particularly intent on  acquiring this knowledge was Bishop Robert Grosseteste (1179-1253), who came to hear about a book containing the Testaments of the Twelve Patriarchs, held in the library of the Archbishop of Athens. He sent envoys to fetch it for him, and although already in his 60s by that time, taught himself Greek so that he could read and translate it. This was at a time when universities were in their infancy, and scholarly learning hard to come by. For Grosseteste, this manuscript was almost as important as the Bible. He believed it had been translated from an original Hebrew account and within it he identified passages appearing to prophesy the coming of Christ – useful ammunition in his desire to convert Jews to Christianity.

Digital Library users looking at the manuscript today can see in close-up the arresting detail of Grosseteste’s own handwriting on the pages, commenting on the text as he translated it. His Latin version was popular - over eighty manuscripts survive and it was used as a source for further translations into English, French, German, Anglo-Norman, Danish and Czech.

Grosseteste is believed to have left the original Greek manuscript to the Franciscans in Oxford, and little more was heard of it until it appeared in the 16th century in the library of Matthew Parker, Archbishop of Canterbury, who was interested in it for its historical rather than its religious importance. Parker’s mission was to prove the independence of the English Church from Rome, and in attempting to do so he amassed a hugely important collection of ancient manuscripts (most now in the Parker Library in Corpus Christi College with a few donated to the University Library). Here again our manuscript underwent change and reinterpretation – Parker did not hold back from making amendments to the books in his possession. A Latin index was added by inserting new pages, with the text being rebound and page numbers added throughout.

In taking its place in the Digital Library, the manuscript has been “annotated” once again –  notes and links having been added to aid understanding  - and the process of interpretation and dissemination continues, with library users not only reading and examining the document, but also sharing ideas and thoughts about it on Twitter and other online media.

“It is a fascinating continuum of transmission”, said Huw Jones, Metadata Specialist for the Digital Library. “This manuscript has been around for a long time and has been used by different people for a number of different, sometimes controversial, reasons – and now people are tweeting about it. Digitisation has enabled us to take unique treasures and give them to the world for free, and created a new way of engaging in a process which is as old as language itself.”

The initial development of the Cambridge Digital Library has been funded through a generous gift from the Polonsky Foundation. 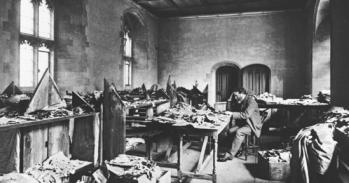 Solomon Schechter (1847-1915): a Jewish polymath with a gift for friendship 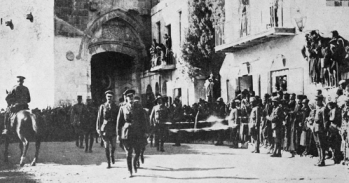 A conflict of Biblical proportions: How the Bible was used to turn the First World War into a Holy War