Engineering atoms inside the jet engine: the Great British Take Off

The Periodic Table may not sound like a list of ingredients but, for a group of materials scientists, it’s the starting point for designing the perfect chemical make-up of tomorrow’s jet engines.

Increasing one ingredient might produce one sought-after property, but at the sake of another – we need to find the perfect chemical recipe

Inside a jet engine is one of the most extreme environments known to engineering.

In less than a second, a tonne of air is sucked into the engine, squeezed to a fraction of its normal volume and then passed across hundreds of blades rotating at speeds of up to 10,000 rpm; reaching the combustor, the air is mixed with kerosene and ignited; the resulting gases are about a third as hot as the sun’s surface and hurtle at speeds of almost 1,500 km per hour towards a wall of turbines, where each blade generates power equivalent to the thrust of a Formula One racing car.

Turbine blades made from ‘super’ materials with outstanding properties are needed to withstand these unimaginably challenging conditions – where the temperatures soar to above the melting point of the turbine components and the centrifugal forces are equivalent to hanging a double-decker bus from each blade.

Even with these qualities, the blades require a ceramic layer and an air cooling system to prevent them from melting when the engine reaches its top temperatures. But with ever-increasing demands for greater performance and reduced emissions, the aerospace industry needs engines to run even hotter and faster, and this means expecting more and more from the materials they are made from.

This, says Dr Cathie Rae, is the materials grand challenge. “Turbine blades are made using nickel-based superalloys, which are capable of withstanding the phenomenal stresses and temperatures they need to operate under within the jet engine. But we are running close to their critical limits.”

An alloy is a mixture of metals, such as you might find in steel or brass. A superalloy, however, is a mixture that imparts superior mechanical strength and resistance to heat-induced deformation and corrosion.

Rae is one of a team of scientists in the Rolls-Royce University Technology Centre (UTC) at the Department of Materials Science and Metallurgy. The team’s research efforts are focused on extracting the greatest possible performance from nickel-based superalloys, and on designing superalloys of the future.

Current jet engines predominantly use alloys containing nickel and aluminium, which form a strong cuboidal lattice. Within and around this brick-like structure are up to eight other components that form a ‘mortar’. Together, the components give the material its superior qualities.

“Even tiny adjustments in the amount of each component can have a huge effect on the microscopic structure, and this can cause radical changes in the superalloy’s properties,” explains Dr Howard Stone. “It’s rather like adjusting the ingredients in a cake – increasing one ingredient might produce one sought-after property, but at the sake of another. We need to find the perfect chemical recipe.”

The researchers melt together precise amounts of each of the different elements to obtain a 5cm bar, then exhaustively test the bar’s mechanical properties and analyse its microscopic structure. Their past experience in atomic engineering is vital for homing in on where the incremental improvements might be found – without this, they would need to make many millions of bars to test each reasonable mixture of components. 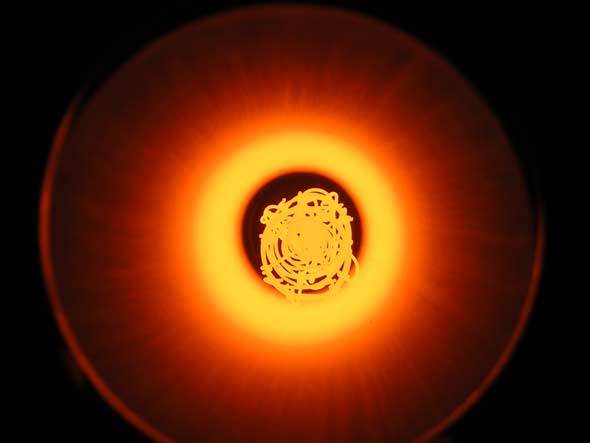 Now, they are looking beyond the usual components to exotic elements, although always with an eye on keeping costs as low as possible, which means not using extremely rare materials. “The Periodic Table is our playground… we’re picking and mixing elements, guided by our computer models and experimental experience, to find the next generation of superalloys,” he adds.

The team now have 12 patents with Rolls-Royce. One of the most recent has been in collaboration with Imperial College London, and involves the discovery that the extremely strong matrix structure of nickel-based aluminium superalloys can also be achieved using a mixture of nickel, aluminium, cobalt and tungsten.

“Instead of the cake being flavoured with two main ingredients, we can make it with four,” Stone explains. “This gives the structure even better properties, many of which we are only just discovering.”

“We’ve also been looking at new intermetallic reinforced superalloys using chromium, tantalum and silicon – no nickel at all. We haven’t quite got the final balance to achieve what we want, but we’re working towards it.”

Stone highlights the importance of collaboration between industry and academia: “New alloys typically take 10 years and many millions of pounds to develop for operational components. We simply couldn’t do this work without Rolls-Royce. For the best part of two decades we’ve had a collaboration that links fundamental materials research through to industrial application and commercial exploitation.”

It’s a sentiment echoed by Dr Justin Burrows, Project Manager at Rolls-Royce: “Our academic partners understand the materials and design challenges we face in the development of gas turbine technology. Improvements like the novel nickel and steel alloys developed in Cambridge are key to helping us meet these challenges and to maintaining our competitive advantage.”

The Cambridge UTC, which was founded by its Director Professor Sir Colin Humphreys in 1994, is one of a global network of over 30 UTCs. These form part of Rolls-Royce’s £1 billion annual investment in research and development, which also includes the Department of Engineering’s University Gas Turbine Partnership. Rolls-Royce and EPSRC also fund Doctoral Training Centres in Cambridge that help to ensure a continuing supply of highly trained scientists and engineers ready to move into industry.

The UK aerospace industry is the largest in Europe, with a turnover in 2011 of £24.2 billion; worldwide, it’s second only to that of the USA. Meanwhile, increasing global air traffic is estimated to require 35,000 new passenger aircraft by 2030, worth about $4.8 trillion.

For the researchers, it’s fascinating to see global engineering challenges being solved from the atom up, as Rae explains: “The commercial success of a new engine can be dependent on very small differences in fuel efficiency, which can only be achieved by innovations in materials and design. There’s something really exciting about working at the atomic scale and seeing this translate into innovation with big powerful machines.”