Citizens of the flow

New research from the Department of Sociology is looking at how rhetoric and policy shape immigrant identities, attitudes and behaviour in Europe.

For all the bluster, not enough is understood about the attitudes of people who now prop up key institutions across the continent

Millions of people are pulled into this “flow of humanity” each year, crossing international borders in search of work and security, pulsing to the capitalist heartbeat of our global economy.

For many of the wealthier EU nations, immigration has been starkly defined as a ‘problem’, explained sociologist Dr Thomas Miley. “Relations between native citizens and migrant communities have become increasingly strained as anti-migrant rhetoric tightens its stranglehold on public perception – in the UK, EU and across the world.”

But there is little research into how migrants themselves are reacting to the politicisation of immigration: how does it feel to be treated like a curse on the land you are trying to call home, a citizen of the ‘flow’ and sometimes little else?

“Migrants are seen as having behaviours and attitudes that are completely determined by the countries they come from, but actually they’re here and part of the population, even if they’re not part of the citizenry. We’re interested in how these policies affect the outsiders – outsiders who are inside,” said Miley.

His research is focusing on the extent to which restrictive migration policies impact and ghettoise migrant communities, and how that reverberates back into ‘host’ societies, something Miley became interested in during his formative years in California in the era of Governor Pete Wilson.

Entering office in 1991, Wilson “rode on a wave of public resentment towards migrant Mexican communities during grim economic times for the state,” explained Miley. Wilson was associated with Proposition 187, under which any suspected illegal immigrant had to prove legal residency in order to access basic services such as schools and medical care. “Considered by many civil liberty groups to be among the most toxic migration legislature enacted in modern America, Prop 187 shares eerie similarities to recent UK coalition policies towards new EU migrants.

“Places like California, as well as Spain – where we are currently conducting research –  welcome migrants when boom times require labour; workers from poorer countries are grateful for better conditions and their precarious situation means they are less likely to mobilise politically. It’s like having an indentured servant,”
said Miley.

“Then, in times of economic crisis and high unemployment, people start pointing fingers. Migration becomes politicised because – in terms of the democratic idea of getting votes – it’s a winner. But it’s not democratic politics; democracy assumes citizenship. Migration is a card that’s easy to play politically because you are targeting people who don’t have the rights of citizens.”

Spain is the country he knows best, and where the pilot study is taking place. When Miley arrived in Spain as a research fellow in the late 1990s, there was very little external immigration – less than 2% of Spain’s population were born outside of the country. By the mid-2000s, that had risen to over 12%. “In the first few years of the Euro, you had a huge economic boom in Spain, and the conservative government welcomed immigrants from Latin America, tapping into imperial legacies to encourage migrant workers who might integrate better in terms of language, religion and even a shared conservatism.”

Men were required for the construction sector; women for domestic work – such as caring for the elderly. Public opinion polls of the time showed low levels of xenophobia, economic times were good and migration wasn’t an issue for Spaniards. Then the global finance system crashed. 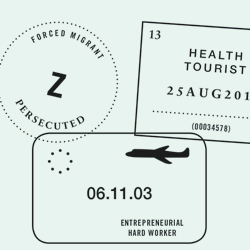 “With the outbreak of the crisis, un-employment has gone through the roof, crushing a whole generation of young Spaniards along with the migrants – the construction sector came to a standstill,” said Miley. “But conditions are still better in Spain than in many of the countries the migrants came from. They have built lives there, so they’re not leaving – in fact it is the young Spanish that are beginning to migrate.”

As Miley witnessed in California, familiar rhetoric and policies began to creep into Spanish national debate. It became harder for migrants to access healthcare and social security; different communities were offset against each other, given a pecking order in the national consciousness, with Moroccans fairing badly.

But in a country where fascism is still a relatively recent memory, right-wing populism is harder to mobilise without losing the centre ground. “While national politics moved to the right, it had to tread carefully. But at a local level, the right-wing populist game really came into its own,” said Miley.

The pilot study has focused on the Barcelona metropolitan area, with fieldwork interviews taking place among three of Spain’s largest migrant communities – Latin American, Moroccan and Romanian – in two industrial cities called Badalona and Hospitalet. Here, Miley and co-researcher Enric Martínez-Herrera from the Universitat Pompeu Fabra in Barcelona have been asking migrants about their everyday experiences of everything from public transport to mass media, and gathering reactions to specific political discourse.

Tensions are particularly strained in Badalona, explained Miley. Xavier Albiol was elected mayor in 2011 on a strong anti-migrant line, and is currently on trial accused of discrimination charges, following a campaign pamphlet which featured images of anti-Romanian slogans.

“This is muddied further by conflict between old and new migrant communities, including internal migrants such as working-class Spaniards from the south of the country,” said Miley. “A myriad of attitudes get fused into a general anti-migrant sentiment that has nothing to do with conflict at the local level – where different marginalised groups are pitted against one another.”

He gives the example of Spanish gypsies in Badalona – a historically persecuted minority – whose community leaders have formed an alliance with the far-right mayor, initially against new migrant groups of Romanian gypsies, and then migration generally. “This from an ethnic group synonymous with migratory living,” said Miley.

Once the Spanish study is finished, Miley and colleagues aim to replicate it in other European capital cities in a major piece of international comparative research, involving doctoral students holding focus groups with immigrants in countries such as France, Germany, Italy, Sweden and the UK.

“We want to find out how local and national political dynamics affect migrants, how their experiences shape attitudes towards the society they live in, and, importantly, to what extent they follow and understand the policies that will impact their lives,” said Miley.

The project aims to improve public debate in European democracies, he added, by cutting through media hysteria and knee-jerk politics to find out what it means to be a migrant in the 21st century. “We’re distinguishing between politics and policies to look comparatively at how they impact the lives of migrants, and how that in turn affects interactions with domestic populations – the dialectical relationship at the cornerstone of what is known as ‘integration’.”