Can you put a price on health?

As health services strive to improve quality and reduce costs, researchers study the benefits – and the pitfalls – of ‘pay for performance’ in hospitals.

As new ways of delivering health services develop, it becomes ever more important to evaluate how effectively organisations in primary, secondary, community and social care are performing

Hospital performance has rarely been out of the news in recent months, following the conclusion of a public inquiry into Mid Staffordshire NHS Foundation Trust that argued for “fundamental change” in the culture of the NHS to make sure patients are put first. The news casts a spotlight on what measures the government might take to combat poor care.

One emerging movement in hospital health services is the adoption of pay-for- performance (P4P) schemes to reward better-performing hospitals with cash incentives. In the USA, for instance, the government’s social insurance programme Medicare has launched P4P in efforts to encourage better and more standardised care, and to penalise hospitals with high re-admission rates.

However, it remains unclear as to whether P4P schemes improve patient outcomes, explained Professor Martin Roland, Director of the Cambridge Centre for Health Services Research (CCHSR): “P4P is being widely implemented, especially in the United States, despite a scant evidence base.”

The idea behind P4P is to reward healthcare providers based on how well they perform against a set of pre-agreed criteria, such as whether anti-clotting medication has been given within 30 minutes following a heart attack and how quickly antibiotics are given for patients with pneumonia.

In the first evaluation of a P4P scheme (Advancing Quality) in the UK, a report has suggested that 890 lives were saved across 24 hospitals in the northwest of England over an 18-month period. The analysis of the NHS scheme was carried out by a team of researchers at CCHSR, the University of Manchester and Nottingham University Business School, and was published in the New England Journal of Medicine.

The Advancing Quality scheme used a ‘tournament’ system, in which only the top performers received a bonus. The researchers evaluated the number of in-hospital deaths due to pneumonia, heart failure and heart attack within 30 days of admission following the scheme’s introduction, compared with the 18 months preceding it, among a total of 134,435 patients admitted for these conditions and controls across the country.

A scheme similar to Advancing Quality had failed to show any improvement in outcomes in the USA. Speculating on reasons for the difference, Roland said: “The context is really important – the level of the incentives, how they are structured and whether clinicians from different hospitals meet together to discuss how they were improving care face to face as they did in the UK, or through ‘webinars’ as in the US.”

Extensive work by CCHSR evaluating P4P programmes has shown that these incentives can have benefits, but also unintended consequences. For instance, care for non-incentivised health problems may be neglected if there are powerful incentives to concentrate time on other conditions.

The CCHSR is a collaboration between the Health Services Research Group in the University’s Institute of Public Health and the Health and Healthcare Policy Programme at the independent and not-for-profit research institution RAND Europe. The centre was recently placed second in a world ranking of health policy think tanks. “The collaboration between the University and RAND Europe has been a great success,” said Roland, “bringing together expertise from two complementary organisations as well as bringing in experts from the US to collaborate on our research.”

“As new ways of delivering health services develop, and public expectations change, it becomes ever more important to evaluate how effectively organisations in primary, secondary, community and social care are performing,” he added. “These are significant contributions to the healthcare debate because only then will policy makers have the knowledge to determine where best to place limited resources.”

Rolling 50/30 day cycle of lockdown and relaxation could be a useful option for managing COVID-19, model suggests 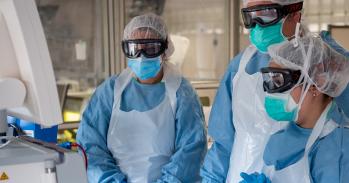