Never too young to talk about death?

Talking to children about death is a difficult and delicate task, but it is sometimes also necessary. While many adults shy away from discussing the loss of a friend or relative with children, some health professionals argue that we should be more proactive. Here, Hannah Newton, a social historian and research associate at St John's College, Cambridge, explains why this is one area where the past may offer valuable lessons for our own time.

Before we can help our children, we need to help ourselves: we need to overcome our own reluctance to think about death

Should we talk to children about death, and if so when, and how? It’s hard enough discussing it with other adults. Death is unfamiliar to most of us, even though we see it acted on our TV screens, and reported in the news on a daily basis. Out of a desire to protect our children, we often shy away from discussing it openly.

But health professionals and teachers think this might be unwise. Dr Stuart Crisp, consultant paediatrician, writes, ‘Sooner or later, the child will be confronted with the subject. If a child has some understanding of the meaning of the word “death”, they will be better equipped to deal with the situation.’ In the UK, 92% of children will have lost someone close to them by the age of fifteen, and at any one time, approximately 70% of schools have a bereaved pupil under their care. The charity Marie Curie Cancer Care has piloted an innovative scheme, ‘The Daffodil Project’, to address these issues. A group of Year Six pupils ‘buddy up’ with patients at the Marie Curie Hospice in Newcastle, and over the course of four weeks, are given the opportunity to explore the subjects of death and illness in a supportive and friendly environment. The aim is to ‘break down the taboos and encourage discussion around these often sensitive topics’, helping children ‘come to terms with death and dying’. While talking cannot solve all the problems, it is a comfort to children to know that they can ask questions and share their thoughts.

Seeing how parents in the past dealt with these challenging issues provides food for thought. In the seventeenth century, almost a third of children died before the age of fifteen, and the same proportion had lost a parent by this age. Far from shielding children from these foreboding facts, parents believed it was vital that they were aware of the reality of death. Primary sources such as diaries, letters, and eulogies, show that the young were encouraged to witness the deathbed scene, and ask questions about their own mortality. In the 1650s, four-year-old John Sudlow’s baby brother died: seeing the little body ‘without breath, and not being able to speak or stir, and then carried out of doors, and put into a pit-hole’ made this boy ‘greatly concerned’, and caused him to ask his parents ‘whether he must die too’. His parents answered frankly, that one day he must. 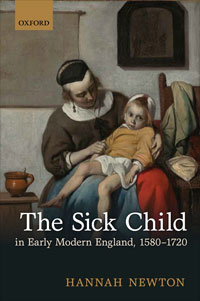 When children themselves fell seriously ill, their parents alerted them to the possibility of death. ‘My Dear, Are you so ill that you think you shall die?’, enquired the mother of thirteen-year-old Margaret Andrews three hours before her death in 1680. A child was never too young to hear about death. Four-year-old Mary Stubbs was asked ‘Whether she was willing to die and go to Heaven’ during her illness in the 1680s, to which her reply was ‘Go to Heaven’. This practice might seem cruel, but in the early modern period, it was considered quite the opposite: it was part of what was known as the ‘preparation for death’, a crucial component of patient care at this time. Essentially, family members sought to help their dying loved one reach a state of peaceful acceptance, and even, happiness, about death. They did this by encouraging the patient to take part in various religious activities, including prayer, repentance, and Bible-reading. It was hoped that through these acts, the dying would become convinced that they would go to heaven.

At the heart of the preparation process was talking. Children were invited to voice their worries and doubts, and receive explanations and reassurances. In 1644, eight-year-old Tabitha Alder from Kent told her parents she was ‘greatly afraid’ of dying because ‘she feared that she did not love God’. After a ‘dear friend’ of the family had spent a day talking and praying with her, she expressed ‘a great deal of joy, that now she…loves the Lord Jesus dearly’. Children also talked about the practical consequences of death, such as what would happen to their toys and possessions. When eleven-year-old Caleb Vernon from London was very sick in 1655, he overheard his little sister Nancy asking, ‘who shall have Calebs [pet] Bird when he is dead?’ Caleb told his father, ‘I shall not think of dying yet, but if I do, I will give it to my Sister Betty, who hath none, for Nancy hath one already’.

Children’s greatest fear was of being separated from their parents in death. In the 1670s, six-year-old Jason Whitrow took his mother ‘by the hand, and said, Mother, I shall dye, oh that you might dye with me, that we might both go to the Lord together’. Parents sought to allay these anxieties by reassuring their dying children that they would eventually enjoy a blissful reunion in heaven. A few hours before her death in 1679, Isaac Archer from East Anglia told his six-year-old daughter Frances, ‘she was going to heaven to her brothers and sisters, and that we should all meet againe’. Through these conversations, children sometimes came to feel happy about dying. When eleven-year-old Martha Hatfield lay ill in 1652, she ‘was enabled with great alacrity to express the joy of Heaven’, declaring that ‘I am now going to Heaven’, and seeming to be ‘exceedingly rapt up with joy’.

To a modern ear, these positive reactions to death seem scarcely credible. Parents may have exaggerated their child’s confidence in heaven as a way to allay their own grief. However, when we consider early modern attitudes to childhood, these responses begin to seem more plausible. Of all the ages, the young were thought to be the most capable of strong religious faith: they were especially beloved by Christ, and their innocence brought them closer to God. As such, it was considered appropriate to teach children about the joys of paradise from their youngest years. The result was that this age-group often held very vivid imaginations of what heaven would be like. When ten-year-old Christian Karr was seriously ill in 1702, she told her family, ‘O I think I see Heaven, I think I see Heaven, That is a glorious sight…the Walls and the streets of that City are like burning Gold. And I think I see all the Saints, arrayed in Whyte there’. Children’s happiness about death can also be explained by the fact that many had already suffered the death of a parent, and longed to be reunited. In 1620, ten-year-old Cecilia D’Ewes contracted the smallpox; her mother had died a short time previously, and therefore, the girl appeared not to mind dying, but instead cried with relief, ‘I will go to my mother, I will see her; I shall shortly be with her’.

But it would be wrong to paint the early modern period as a golden age. The flip side to the belief in heaven, was hell. Children were taught about hell in all its gruesome details. Robert Russel’s "A Little Book For Children", published in 1690, told its child reader, ‘[If ] thou wilt continue to be a naughty wicked Child . . . Then thou with all thy wicked Companions shall be tumbled into the Lake that burns with Fire and Brimstone; there thou shalt endure such unspeakable Pain . . . which cannot be conceived’. These books also contain vivid pictures of the damned in hell, such as the one here, which depicts a woman in the jaws of hell, surrounded by flames. Unsurprisingly, children often responded with great fear. When fifteen-year-old Joseph Taylor read ‘a little Book’ about hell, he was ‘put into sore Amazement and very great Terrour’. He sat ‘groaning in the dark’, crying ‘O! How shall I do to bear this heavy Sentence! How shall I bear the tormenting Flames of Hell for ever and ever’.

So, what can we take away from this brief foray into the early modern period? Parents in the past, like today, loved their children, and sought to comfort them through talking. But this was probably far less difficult for parents in the early modern period, because they appear to have been so much more certain about what happened after death. Before we can help our children, we need to help ourselves: we need to overcome our own reluctance to think about death.

Woodcut of hell from A voice from heaven, the youth of Great Britain (1720)