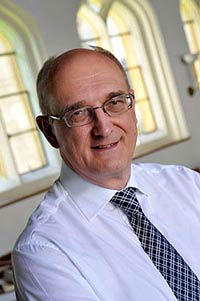 Just over a year ago, the Regent House elected me as Vice-Chancellor, and a term ago, I started in post. I want to thank you for the warm welcome I have received as I begin to serve what I consider to be the greatest university in the world. During the past term, I have been getting to know the University: by visiting each of the six academic Schools and many of the Colleges, and by meeting many of our alumni. As I have done so, the country's universities have begun to face the most fundamental changes for a generation. There has been much to listen to and much to digest.

The most profound change has been the Government's decision to increase the proportion of the cost of tuition paid by the individual student, after graduation, offsetting a substantial reduction in the block grant received by universities for teaching. That in itself is the latest in a series of cuts in direct government funding for higher education - including the loss of the Overseas Research Studentship scheme in 2008, the cut to the budget for maintaining historic buildings in 2009, and a £600 million cut announced in December 2009. The University responded to these cuts as they happened, through a variety of measures. We have maintained throughout that there are strong arguments for a significant degree of public funding, reflecting the public benefit which higher education delivers to society, beyond the benefit to individuals.

The latest changes are more concerning still, because of their magnitude and timing. They need their own careful response. For detail on the University's position on the funding of Higher Education and student support, there are two documents I would encourage you to read: the University's second response to the consultation for the 2010 Browne Review, and the statement of policy and principles which the University Council set out after its meeting last month.

There is much that we do not yet know about the effect of the new funding arrangements on Cambridge. We will know more when we receive the funding letter for 2011/12 from the Higher Education Funding Council (HEFCE) in March, but there is little doubt that we stand to lose much of the present direct government teaching grant. I would emphasize however that even with a corresponding increase in fees, the costs of a Cambridge undergraduate education will still greatly exceed the income received to pay for it. A further complication is that we do not yet know the conditions to be imposed by the Government if we propose to charge more than £6,000 a year in fees. This we anticipate learning in February. After consultation with the Colleges, the University Council expects to decide on the related matters of the level of tuition fee we charge, and the provision of bursaries and other support we offer to UK undergraduates, later this term.

There are some things, though, which I can say confidently now. Firstly, we are committed as an institution to offering UK undergraduate places to applicants of the highest intellectual potential, irrespective of financial or other considerations. An undoubted consequence of higher tuition fees will be that our widening participation work across collegiate Cambridge will become more important than ever.

Secondly, Cambridge will, and must, remain broadly based in its disciplines. There has been particular anxiety that national funding proposals threaten the arts, humanities and social sciences. We retain the autonomy to decide on funding allocations within the University, and let me repeat the commitment of the University Council and my own commitment to maintaining the financial and academic health of all six of our academic Schools and the services that support them. Indeed, the health of the arts, humanities and social sciences in Cambridge is a measure of the health of the University itself, and I am determined to uphold breadth, as well as excellence, in the education we offer.

Thirdly, we will all strive to ensure that a Cambridge education, renowned around the world for its quality and underpinned by our Colleges, remains unparalleled.

This is a time of great change for UK universities. But in Cambridge our institutional focus on quality and excellence remains unshakeable.

Thank you for your support over the last term. I look forward to meeting even more of you over the course of the year and beyond, and I wish you a very happy 2011.