Re-enacting the first night of television, 80 years on

Our image quality was quite remarkable.

Television’s Opening Night: How the Box was Born will be screened on BBC Four on 2 November 2016, 80 years after Britain first experienced the phenomenon of a live television broadcast. No recordings of the 1936 broadcast remain, so Windfall Films sought to piece together and re-enact every aspect of the historic day, with experts Dallas Campbell and Professor Danielle George, as well as Dr Hugh Hunt from Cambridge's Department of Engineering.

At the home of BBC television, London’s Alexandra Palace, the stage was set for a competition between rival technologies after the Television Committee, set up by the government in 1934, could not choose between the two systems tendered and opted to trial both.

Thus Scotsman Logie Baird’s 240-line mechanical transmission of moving pictures and sound along existing wireless technology was in one studio on the first night, and Marconi’s Emitron electronic 405-line system was in another. The former used a spinning disc and the latter a cathode ray receiver. The ultimate aim was the same – to create a scanned image that could be reproduced by the cathode ray tube of a television screen.

Through the toss of a coin, Logie Baird’s system went first, which was perhaps fitting as he had demonstrated a working television system a decade previously and succeeded in transmitting images from London to Scotland and across the Atlantic.

Logie Baird used a mechanical spinning image device, the Nipkow Disk, which had been invented in 1884. His genius was to perfect the transmission of images over the air waves. When a bright light shone through one hole at a time in this spinning disk it caused a tiny spot of light to scan across the presenter’s face. Hence the camera was known as ‘the flying spot’, explains Hunt, who is a Fellow of Trinity College.

This light was picked up by a photocell and the reflected light intensity relayed by wireless to televisions in people’s homes – as there were only around 300 sets in 1936, many people flocked to Selfridges to watch the phenomenon in their showroom.

Together with engineering students Charlie Houseago (Trinity), Anna Maria Kypraiou (Newnham) and Arthur Tombs (Queens’), and colleagues in the Engineering Department, Hunt recreated a scaled-down version of the flying spot camera for the documentary.

As Logie Baird found, synchronizing the television’s flying spot with the camera’s spot was a huge challenge.

Hunt said: "Our disc is 600mm in diameter with 60 holes spinning at 900rpm. This creates a 60 line image at 15 frames per second, not quite up to the original 240 lines at 25 frames per second but we didn’t have the 20 years of development time that Logie Baird had. Still, our image quality was quite remarkable."

The official trial of the two systems was soon halted as Marconi’s EMI system was much more flexible and versatile than Logie Baird’s flying spot – it could film in natural daylight for instance – and the future of television was set. Until the flat-screen technologies of the 1990s, television cameras were essentially derived from the EMI system and televisions in people’s homes were cathode ray tubes.

"As remarkable an invention as it was I don’t think the flying spot was ever going to last," said Hunt. "But that doesn’t detract from Logie Baird’s genius and vision. He could see that people would be captivated by television. His system was developed and perfected over decades at a time when there were no alternatives."

Television’s Opening Night: How the Box was Born will be broadcast on BBC Four at 9pm on Wednesday 2 November. 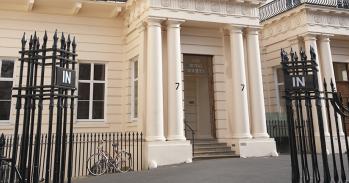