Seven distinguished individuals were given Honorary Degrees, the highest honour that the University can bestow, by the Chancellor at a special ceremony in the Senate House today.

She is a shining example of the Paralympic aim to inspire and excite the world. It could have been she of whom Pindar said, ‘She is unrivalled in speed, with hand and heart to match.'

A doctorate in law was conferred on 'Tanni' Grey-Thompson, president of the National Council for Voluntary Organisations, for her unrivaled Paralympic achievements and continuing work for UK sport. In the Oration during today's ceremony at Senate House, Baroness Grey-Thompson was referred to as "a shining example of the Paralympic aim to inspire and excite the world. It could have been she of whom Pindar said, ‘She is unrivalled in speed, with hand and heart to match.’"

Business leader and gender champion Helena Morrissey was awarded a doctorate in law. A Fitzwilliam College alumna, Morrissey is CEO of Newton Investment Management and founder and chair of the 30% Club, a cross-business initiative aimed at achieving at least a 30% representation of women on UK corporate boards.

Physician and immunologist Professor Sir Keith Peters was awarded a doctorate in medical science for his work in medical education and research. The Honorary Fellow of Christ's College and Clare Hall and Cambridge's Regius Professor of Physic Emeritus was instrumental in transforming the University of Cambridge's Clinical School into a world-class centre for clinical research and teaching, as well as planning London's soon-to-be-opened Francis Crick Institute.

The man credited with introducing elegance, purity and beauty to the design of personal computers as Apple's chief designer was also honoured. A doctorate in science was conferred on Sir Jonathan Ive, Chief Design Officer at Apple, in recognition of his impact on the world of computing and in making technology approachable through design.

A doctorate in letters was conferred on former director of the National Theatre Sir Nicholas Hytner. The honour was in recognition of his distinguished career in  theatre, film and opera. Sir Nicholas, who produced a repertoire of 20 productions a year, including War Horse and The Curious Incident Of The Dog In The Night-Time, and introduced NT Live cinema broadcasts around the world, is also an Honorary Fellow of Trinity Hall.

Tate Director Sir Nicholas Serota, Honorary Fellow of Christ's College, was awarded a doctorate in letters in recognition of his achievements in the fields of art, architecture and sport. In addition to overseeing the opening of Tate St Ives in 1993 and Tate Modern in 2000 and the Millbank building’s transformation into Tate Britain the same year, Sir Nicholas was also a Board member of the Olympic Delivery Authority, responsible for building the Olympic Park for the London Olympics in 2012.

A doctorate in music was conferred on Head of Piano at the Royal Academy of Music Professor Joanna MacGregor. The pianist, conductor, and composer was already an Honorary Fellow of Murray Edwards College in addition to being awarded an OBE in 2012. A regular performer at the BBC Proms, she has made more than 40 solo recordings, founded her own record label and directed festivals including the Bath International Music Festival and the Royal Opera House's Deloitte Ignite Festival.

‘Tanni’ Grey-Thompson read Politics and Social Administration at Loughborough University, before going on to represent Great Britain in athletics from 1988 to 2004 and breaking 30 world records during this time. Born with spina bifida, Tanni Grey-Thompson is one of Britain’s foremost Paralympic athletes, having been awarded eleven gold medals, four silver and one bronze over 16 years and at five Paralympic Games. After retiring in 2007, she became Director of UK Athletics and a Board Member of the London Marathon (she had won the wheelchair race six times). In addition to being President of the National Council for Voluntary Organisations, she currently sits on the panel for the London Legacy Development Corporation as well as chairing the Commission on the Future of Women’s Sport for the Women’s Sports and Fitness Foundation. Tanni Grey-Thompson has been Chancellor of Northumbria University since 2015 and is also a Deputy Lieutenant for North Yorkshire. Appointed MBE in 1993, promoted OBE in 2000 and then DBE in 2005, Tanni Grey-Thompson was created a life peer in 2010.

Helena Morrissey read philosophy at Fitzwilliam College before pursuing a career in finance. Beginning her career with Schroders in New York, she joined Newton in 1994 as a fixed income fund manager and was appointed Chief Executive Officer in 2001. Newton manages around £50bn for pension funds, charities and through funds available to individuals. Chair of the Investment Association since June 2014 (the UK’s industry trade body, whose members manage £5trn) more recently she was appointed by the Chancellor of the Exchequer to the UK’s Financial Services Trade and Investment

Board. In 2010, Helena Morrissey founded the 30% Club, a cross-business initiative aimed at achieving at least a 30% representation of women on UK corporate boards. Voted one of the 50 Most Influential People in Finance globally by Bloomberg Markets in 2013 and 2014, she has been named one of Fortune Magazine’s World’s 50 Greatest Leaders. Helena Morrissey was appointed CBE in 2012.

Keith Peters is a former Fellow and now Honorary Fellow of Christ’s College and also an Honorary Fellow of Clare Hall. He was born the son of a steelworker in Neath, South Wales and was the first in his family to go to university. A physician and immunologist, after graduating in medicine at Cardiff in 1961 and research in Birmingham and at Mill Hill, he joined the Department of Medicine at the Royal Postgraduate Medical School, Hammersmith Hospital, becoming Professor and Director of the Department in 1977. A pioneer of medical education and research, Keith Peters was Regius Professor of Physic in Cambridge 1987-2005 (now Professor Emeritus) and was instrumental in transforming the Clinical School into a world-class centre for clinical research and teaching. As

Interim Director of the National Institute for Medical Research (2006-08) he later initiated the planning of the Francis Crick Institute, soon to be opened in London. A Fellow of the Royal College of Physicians and of the Royal Society, he is also a Fellow and Past President of the Academy of Medical Sciences. Keith Peters was knighted in 1993.

Jonathan Ive read Industrial Design at Newcastle Upon Tyne Polytechnic, now Northumbria University. Shortly after graduating in 1989, he co-founded the London-based design consultancy Tangerine, but in 1992 moved to the United States and joined Apple's headquarters in Cupertino, California, where founder Steve Jobs subsequently referred to him as ‘his creative partner’.

Now Apple’s Chief Design Officer, he leads the team credited with introducing elegance, purity and beauty to the design of personal computers. Designers of the iMac, PowerBook, iBook, iPod, iPhone, iPad, AppleWatch and MacBook, his team has created products that have transformed the industry and have helped make technology approachable through design.

The most feted industrial designer in his field and beyond, Jonathan Ive’s work has earned many plaudits and six of his products appear in the permanent collection of The Museum of Modern Art in New York. The Design Museum in London named him Designer of the Year in 2003, he received a Lifetime Achievement Award from the San Francisco Museum of Modern Art in 2012, and a year later the BBC’s Blue Peter accorded him a Gold Badge. Winner of the Inaugural Medal for Design Achievement in 1999 and then in 2004 the Benjamin Franklin Medal of the Royal Society of Arts, he is a Royal Designer for Industry and an Honorary Fellow of the Royal Academy of Engineering. Jonathan Ive was appointed CBE in 2006 and promoted KBE in 2012.

Nicholas Hytner read English at Trinity Hall, of which he is now an Honorary Fellow. Director of the National Theatre 2003-15, he directed plays by Alan Bennett (The Madness of George III, The History Boys, The Habit of Art); Shakespeare (Henry V, Much Ado About Nothing, Hamlet, Timon of Athens, Othello); plays from the classical repertoire (The Alchemist, Phèdre, London Assurance); and a wide range of new plays. He produced a repertoire of 20 productions a year, including War Horse and The Curious Incident Of The Dog In The Night-Time, and introduced NT Live cinema broadcasts around the world. Nicholas Hytner has worked widely in opera - in London, Paris, Munich and New York; and in film (The Lady In The Van and The Madness of King George). Theatrical accolades include three Olivier, five Evening Standard and three Tony awards. His recently formed London Theatre Company will open a new theatre at Tower Bridge in 2017. Nicholas Hytner was knighted in 2010.

Nicholas Serota read Economics then History of Art at Christ’s College, of which he is now an Honorary Fellow, and later completed an MA at the Courtauld Institute of Art. Most of his practice as a curator has been in twentieth-century and contemporary art, including the recent Gerhard Richter and Matisse Cut Outs exhibitions at Tate Modern, and the Howard Hodgkin show at Tate Britain. Director of the Tate since 1988, Nicholas Serota has overseen the opening of Tate St Ives (1993) and Tate Modern (2000) and the Millbank building’s transformation into Tate Britain (2000). He has been a member of the Visual Arts Advisory Committee of the British Council and a Commissioner for Architecture and the Built Environment and he was also a Board member of the Olympic Delivery Authority, responsible for building the Olympic Park for the London Olympics in 2012. Nicholas Serota was appointed an Officier de l’Ordre des Arts et des Lettres in 2003 and received the Legion d’Honneur in 2012. Knighted in 1999, he was made a Companion of Honour in 2013.

Joanna MacGregor read music at New Hall, now Murray Edwards College, of which she is an Honorary Fellow. A concert pianist, conductor, and composer who has performed in more than 70 countries, Joanna MacGregor is Professor of the University of London and Head of Piano at the Royal Academy of Music and Artistic Director of the Dartington International Summer School & Festival. As a soloist she has appeared with the London and Sydney Symphony Orchestras, the Chicago, Melbourne and Oslo Philharmonic, the Berlin Symphonic and the Salzburg Camerata. A regular performer at the BBC Proms, she has made more than 40 solo recordings, founding her own record label in 1998. Professor MacGregor was Artistic Director of the Bath International Music Festival 2006-12 and curated the multi-arts Deloitte Ignite Festival at the Royal Opera House in 2010, as well as Aventures, an orchestral series for Luxembourg Philharmonie in 2012-13. A Fellow of the Royal Academy of Music and of Trinity College of Music, she is a Visiting Musician at Oriel College, Oxford. Joanna Macgregor was appointed OBE in 2012. 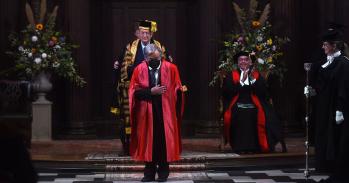 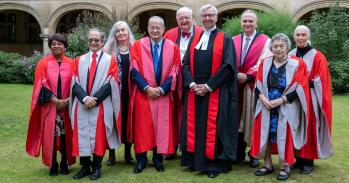 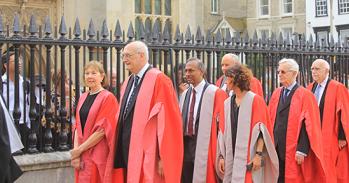