A Cambridge lecturer has been imagining the inner monologue of David Beckham as he encounters the works of the great French philosophers during his time at Paris Saint-Germain.

As Becks says in the blog, ‘I must morph or die’. Or, as the existentialists would say: ‘morph and die’

When David Beckham arrived in France to play out his career at Paris Saint Germain, it occurred to Dr Andy Martin – West Ham fan and French philosophy expert – that Beckham was reaching a turning point, and Paris can be a dangerous town for a mid-life crisis.

What might happen, Martin wondered, if Beckham - global footballing icon and celebrity ‘godhead’ - crashed headlong into the Parisian intellectual tradition, succumbing to ideas of existentialist angst, meaninglessness and absurdity as set out by Sartre, Proust, Camus and other great French thinkers?

Would he descend into anguish when he realises Sartre is right, and ‘hell is other people’? Or would he find ‘the best of all possible worlds’, like Voltaire’s Candide?

Martin conceived of a thought experiment, a first-person narrative from the perspective of Becks as these turbulent philosophies creep under his flawless skin, disrupting the shiny surface and forcing DB to question everything he thinks he knows about meaning, beauty and life itself. Goldenballs deconstructed.

The results appeared in regular instalments over 4 months earlier this year as the Tumblr blog Becks in Paris.

Combining actual events, such as PSG tumbling out of the Champions League and Thatcher’s funeral, with characters - both real and fictional - introducing him to destabilising notions of emptiness, ugliness and revolution, Martin wrote as Beckham’s inner voice. Each week, he speculated on how Becks might think and feel when confronted with explosive concepts from hundreds of years of French philosophical thought.

The blog entries were posted to the University’s Facebook page and flagged through its Twitter feed. Mysterious tweets on Beckham’s imagined activities created bemusement and intrigue among University followers, with Becks in Paris building a curious and then dedicated audience.

“Everyone knows everything about Beckham, and at the same time we know nothing. All we see is appearances, he remains - as an American friend said - a ‘blank’,” says Martin. Part of Beckham’s journey in the blog reflects an increasing awareness of this ‘being and nothingness’, at one point catching himself projected on giant screens and asking “is that all I am – a montage of images? Shorts and shoes?”

So Martin plunged Beckham into the Paris of the mind.

Becks hangs out at the Café de Flore - Sartre and Beauvoir’s favoured spot - with Cantona to talk Camus, debates beauty with Ginola in the salon, ponders Victor Hugo with his enigmatic driver Franck (“ex-Foreign Legion”) and spends a long, dark night of the soul without the letter ‘e’ in a tribute to Georges Perec.

On Sartre and eau de toilette: “I texted VB. ‘btw, name of next fragrance. Existence.’”

On the central character in Camus’ L’Etranger: “It’s like he’s injured, and brought back too soon. Which is where everything goes pear-shaped. The gaffer should have given him longer to get himself straight.”

While getting ‘papped’ after reading La Condition humaine: “Nothing is quite what it’s cracked up to be… what if I don’t feel like smiling one of these days? What am I – ambassador for toothpaste?”

One of the French thinkers with the biggest impact on Becks is Marcel Proust.

His trainer Sami, the team ‘psych’, acquaints him with the famously labyrinthine writer, and when Beckham witnesses Nani’s red card in Man U’s clash with Real Madrid it triggers a series of remembrances that keep sucking him in, “like my whole life was nothing but a series of reds, involuntary exits”.

As the petitie madeleine gives way to Dunkin’ Donuts, he dreams of red card guillotines, reminisces about Fergie when he gets another boot in the face (“He’s the best because he’s the worst,” advises Franck, “L’enfer c’est les autres!”) and descends into a hallucinatory flashback (“I was once a tattoo-less youth, wearing underwear without even getting paid for it”) when he goes ‘in search of extra time’.

Andy Martin has been invited to give talks to sixth-form students around the country on ‘Becksistentialism’ and the theories behind it, and will be giving a public lecture on the project – described by the Newer York press as “experimental literature” - at the University’s forthcoming Festival of Ideas in the autumn.

Martin said having Beckham in Paris was an “irresistible opportunity” to link classic concerns of French philosophy with our contemporary experiences, and suggested it’s a “reasonable hypothesis” that Becks would undergo an intellectual awakening in Paris, as “just about everyone else does!”

“I keep getting calls to give talks, with Columbia and Cardiff as well as the Festival, so it seems to have gone down well,” said Martin. “What’s the point of being a public intellectual if you aren’t going to try and build bridges and make associations that people find interesting?” 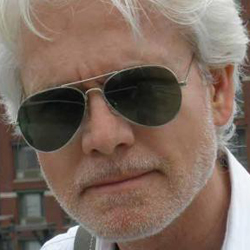 The final lesson of Becksistentialism will come from how he fares in retirement, so what advice might Martin offer?

“Pascal’s theory of ‘divertissement’, or diversion, says all our misfortune springs from our inability to remain at rest in a room. Love and war are divertissements.

“It’s clear that for Beckham – and many others – le foot is the ultimate truth with respect to which everything else is a divertissement - as per the great French writer and thinker Albert Camus, a former goalie who, when asked, said he would choose football over theatre every time. But now Becks will have to diversify, distract himself.

“I’d suggest he take a look at the philosopher Charles Fourier – the passion papillonne – who said you should do everything and anything, but nothing for longer than two hours.

“As Becks says in the blog, ‘I must morph or die’. Or, as the existentialists would say: ‘morph and die.’”

Andy Martin gave a talk about Becksistentialism at this year's Festival of ideas.